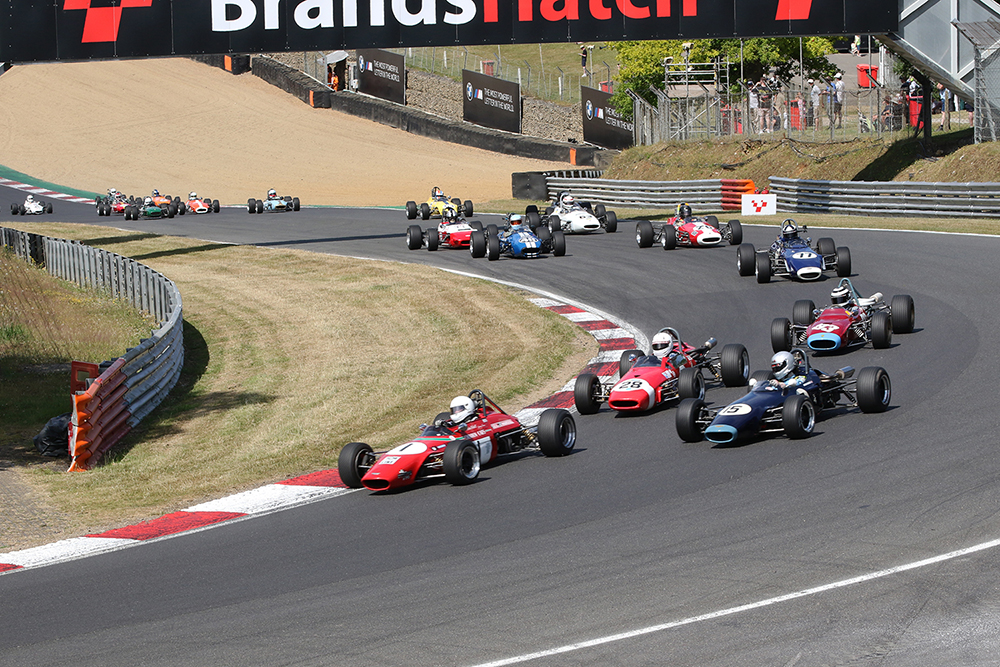 There were several double winners including Martin Stretton, Andrew Smith and Michael Lyons but the biggest winner was teenager Samuel Harrison who took four dominant victories across Historic F3 and Historic Formula Ford.

As with any race meeting, it took a group of dedicated volunteer marshals and officials to ensure the event ran safely and HSCC CEO Andy Dee-Crowne thanked all those who had supported the event. “We had a busy timetable, a few incidents and very hot weather, so I’d like to send my sincere thanks to our team of volunteers. Their professionalism and hard work over the weekend was greatly appreciated.”

Martin Stretton took a mighty double in Historic Formula 2, but it was never easy. The opening race was halted by an early shunt at Paddock when Mark Charteris and Rob Wheldon made contact and both went off, thankfully without injury. Stretton had led from the first start and did the same second time around, this time with Matthew Watts (March 782) chasing hard.

Stretton, running his March 712 in two-litre trim, lost out on downforce but gained some of it back on straight line speed against the later 782s of Watts and Matt Wrigley. It was nip and tuck but Wrigley retired after a brake pipe burst at Graham Hill Bend. Up to a mighty third came the brilliant Benn Tilley in his Formula Atlantic Modus, making up with talent what he lacked in horsepower. 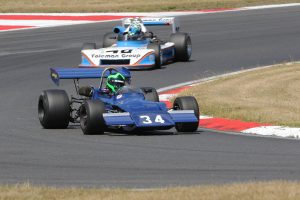 On Sunday, Watts got the jump off the start and led the early laps with Stretton mounting a relentless pursuit. Meanwhile, Wrigley was battling up the order and when Watts toured into the pits with overheating concerns, a legacy of water pump problems in qualifying, Wrigley moved up to challenge Stretton all the way to the flag. Once again, Tilley rounded out the overall podium with another giant-killing performance.

Benn Simms won the opening Historic FF2000 race as arch-rival Graham Fennymore, struggling with a borrowed car after a torrid week, had to battle hard to get ahead of Mark Mercer for second place. Simms missed the second race due to a shoulder injury and Mercer took victory over Fennymore when the winner on the road picked up a two-second penalty.

From the back of the grid after missing qualifying, Michael Lyons made short work of the Aurora Trophy field and soon relieved Stretton and Neil Glover of the top two places. Lyons rocketed the family’s Gurney Eagle away for a resounding victory and did it again on Sunday.

In both races Andrew Smith was away and gone from the Classic F3 field on the first lap. While Smith extended his lead, there was some great battling over the other podium places. Simon Jackson (Chevron B43) led the chase on Saturday but was late out on Sunday as Keith White (Ralt RT1) ran second. Paul Dibden and Stephen Barlow were in the mix as long-distance traveller Barlow had his best weekend so far in his Ralt RT3.

Samuel Harrison was peerless in his Chevron B15 to take another double win from a magnificent Historic F3 pack. Jeremy Timms went after the teenager and never stopped chasing but was always a couple of seconds shy. 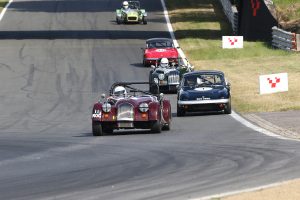 Notable wins on Sunday included those for John Davison in Historic Road Sports, James Dodd in the Guards Trophy when he went solo in the family Ginetta G16 and Michael O’Brien (Brabham BT6) in Formula Junior. Having raced a modern GT car at Oulton Park on Saturday, O’Brien romped clear as Clive Richards led the pursuit. Davison successfully fended off a strong Morgan challenge in Historic Road Sports while Dodd, racing for the first time this season, edged clear of Mark Dwyer’s Lenham in the Guards race as John Spiers (TVR Griffith) topped the GT division.

John Burton and Warren Briggs shared the Thundersports wins. Briggs retired his McLaren M8E from the opener after the throttle linkage broke, but Burton missed Sunday after a bout of food poisoning. Briggs powered the mighty McLaren through from the back of the grid in the second race.

There was no stopping Samuel Harrison as he blitzed his Merlyn Mk20 to a brace of wins in the Historic FF1600 Championship. Unfortunately, the first race has halted at eight laps due to an accident at Paddock Hill Bend for Westie Mitchell after a tangle of wheels with Tim Brise sent Mitchell’s Merlyn flipping into the gravel. Thankfully Mitchell climbed out but was later diagnosed with a broken shoulder. By then, Harrison was away and gone, building his lead by more than a second a lap as Stutely chased from a distance in his Royale RP3.

The second race followed a similar format as Harrison shot away from the start and built an immediate lead as Stutely and Stanzl headed the rest. A ferocious battle for third developed between Stanzl, Wrigley and Rob Smith and, eventually, that was the cause of a red flag after 10 laps when Stanzl’s Elden ended its race in the Paddock Hill gravel.

Charles Barter revelled in the pace of his Datsun 240Z to score a resounding win in a super competitive 70s Road Sports race on Saturday. His son Julian quickly slotted his TVR 3000M into second and chased his father from around a second for the first half of the race. Jeremy Clark  (Lotus Elan), meanwhile, had his hands full of John Williams in first of the Porsches and it took Clark some laps to shake off his challenger. Clark then set about closing down Barter Mk2 and scythed through into second before setting off after Barter senior, finishing two seconds adrift.