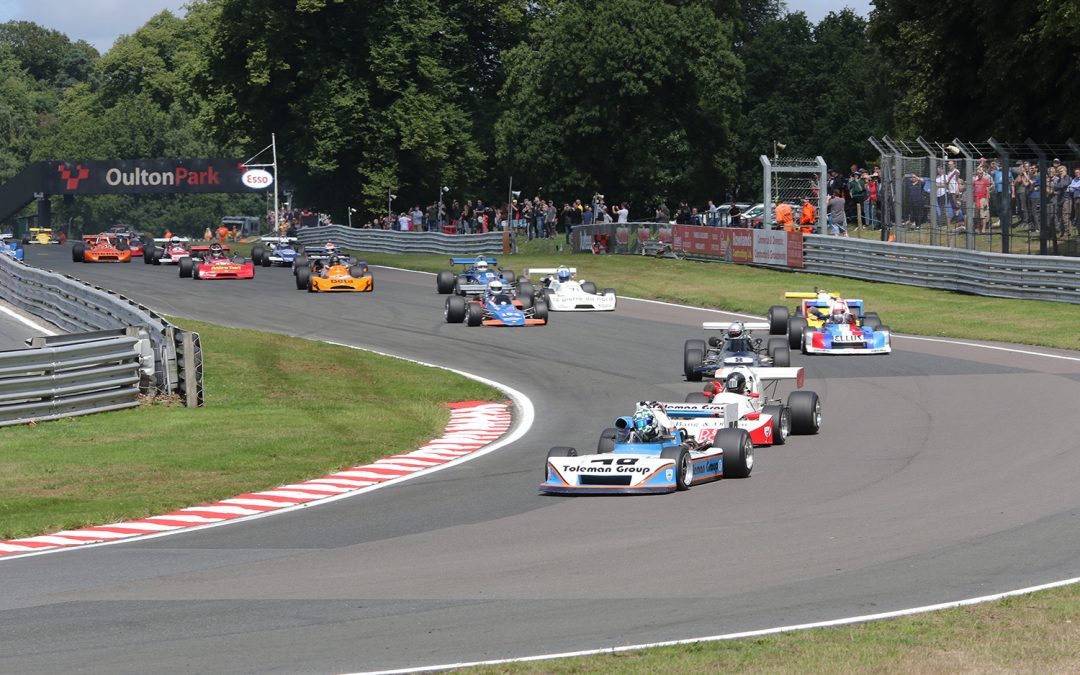 Headlining the action were races for Historic Formula 2 and the HGPCA pre ‘66 Grand Prix cars, which competed for the famous Gold Cup. While Matthew Wrigley won twice in Historic F2, the HGPCA race wins were shared between Andy Willis in the ex-Graham Hill BRM P48 and Charlie Martin in his Cooper T53. Circuit boss Jonathan Palmer was on hand to present the Gold Cup after Sunday’s HGPCA race.

Wrigley was the class of the Historic F2 field with two fine wins in his ex-Rad Dougall March 782. In both races he was chased home by the March 742 of Mark Dwyer as the period F2 cars delivered a great sight and sound.

In the damp of Saturday, it was young Samuel Harrison who starred in his Formula Atlantic Lola T240. Harrison used the slippery track to reduce the impact of his power deficit and challenged Wrigley early on and then ran second until late in the race when a rear wheel worked loose. Harrison still bagged third behind Dwyer before Chris Porritt in his Atlantic Chevron B29.

Out on the first lap on Saturday went Matthew Watts after contact from behind on his Martini MK19 damaged the rear suspension. Watts started from the back on Sunday and raced through to third overall, edging Martin Wood back to fourth in his March 782 as Harrison posted an early retirement. Two more class wins for Frenchman Robert Simac took him a step closer to another Historic F2 title. 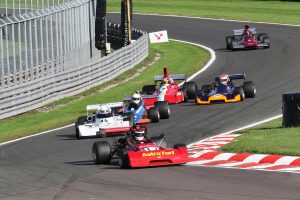 Despite a modest grid, there were two excellent Aurora Trophy races as Neil Glover played a central role in both contests. On Saturday Glover had to push hard to fend off the F2 Chevron of the charging Mike Bletsoe-Brown and their absorbing content lasted until the F5000 Chevron B37 consumed its clutch and left Bletsoe-Brown to win.

On Sunday, Glover started from the back and scythed his way through the two-litre cars to seize an impressive victory. In his wheel tracks, Sam Wilson jumped into Will Tompkins’ March 732 at short notice and, though racing it for the first time, stormed through to grab second from Bletsoe-Brown while Austrian neighbours Martin Friedl (Brabham BT40) and Roland Wiltschegg (Chevron B39) had a wonderful race-long battle for fourth.

For the second time this season, Steve Nuttall won a Guards Trophy race in slippery conditions, moving his Chevron B8 well clear of a good pack of cars. Ben Tusting made light of the conditions to tiger up to second in the Lenham started by his father Robert as David Forsbrey and rapid newcomer Dan Balfour were next up in their Chevrons. The TVR Griffith of Peter Thompson and Mark Hales topped the GT class but they could never relax too much as the Lotus Elan of Sam Smith gave chase and was within five seconds at the flag despite a 30s penalty for a pit stop taken outside the pit stop window.

Richard Wilson’s glorious Maserati 250S was the class of the Griffiths Haig Trophy races and made a fabulous sight and sound around the Cheshire track. In the wet of Saturday, Cliff Gray was a fine second in his Frazer Nash Le Mans, while in the dry of Sunday afternoon Tony Bianchi was able to power the Farrallac Allard up to second.

Horatio Fitz-Simon was peerless in Formula Junior as he scored two emphatic victories in his Lotus 22. The Trans-Atlantic commuter stormed clear in both races to win by significant margins. His pursuers were headed by Philipp Buhofer, Nick Fennell and Tim Child while Peter de la Roche was easily the best of the front-engined pack in his Lola Mk2.