Burton and the Llewellyns star at Silverstone GP

The Historic Sports Car Club’s Silverstone International Trophy meeting (May 14/15) delivered plenty of fine racing across two busy days with notable double winners including John Burton in Thundersports and father and son Tim and Oliver Llewellyn in the opening races for the new Griffiths Haig Trophy.

To honour two of the individuals who were central to the formation of the HSCC back in 1966, the Griffiths Haig Trophy will celebrate the life of Betty Haig and Guy Griffiths with a mini series of races for 1950s drum brake sports cars. Top of the pack in both races was the thundering Allard V8 of Oliver and Tim Llewellyn as the series got off to an excellent start.

Oliver Llewellyn won the first race in some challenging conditions and with a developing misfire, while dad Tim stepped in to do the second race and won after a wonderful battle with the Lola Mk1 of Alex Montgomery. In the opener, Oliver was able to power clear of the Kurtis of Chris Keen on a slippery track. But later, Tim could never escape the clutches of Montgomery and it was close all the way to the flag as they traded the lead many times. Their shared expressions after the race showed how much they had both enjoyed the battle.

Sunday’s racing kicked off with the opening Thundersports race and despite a slight threat of rain John Burton was peerless in his Chevron B26. The veteran racer pulled away from the similar car of James Schryver for another consummate win, while third place was the subject of a great battle between the mighty Lola T70 Mk3B of Alex Montgomery and the nimble two-litre cars of Jamie Thwaites (Chevron B19) and Gary Furst (Lola T212). 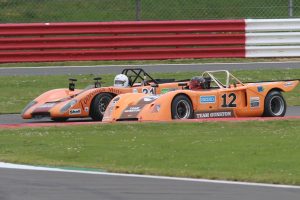 The track was wetter for the second Thundersports race and starting on wets made the hard-charging Thwaites the quickest of all early on after first lap leader Nick Sleep, now in the Lola T70 Mk3B, was edged back. However, as the track dried the slicks of Burton and Schryver came good and Thwaites was pushed back to third as his tyres faded.

Rob Wainwright and Andrew Smith shared the Aurora Trophy wins in their Formula 2 Marches. In the opening race on Saturday Smith was side-lined with brake issues in the recently restored ex-Eddie Cheever 782, so that opened the door for Wainwright to take a first time win in a guest run in Keith Bisp’s 762. His first race retirement left Smith starting at the back of the grid on Sunday, but he made short work of fighting through to the front and taking the lead from Wainwright as they both ran wets on a slowly drying track.

Benn Simms and Graham Fennymore shared the Historic Formula Ford 2000 victories, with Simms making it five from five this season in Saturday’s sunshine. However, on Sunday it was raining as the cars headed out for two exploratory green flag laps and at the end of the first lap, Simms dived into the pits to swap his slick tyres for wets.

It was a very marginal call as some drivers, including Andrew Park, stayed out on slicks. Up front, Fennymore had the pace to go clear, using his wets to full advantage on a still slippery track and he won convincingly. Simms’s late call on tyres put him at the back of the grid but he charged up the order in fine style and late in the race was able to grab second from Ollie Russell, who had his best result to date after a 15-year sabbatical from racing.

A damp track made conditions tricky for the Historic Road Sports pack and played to the wet weather strength of Robin Pearce, who worked his Morgan Plus 8 to the front of the pack ahead of Kevin Kivlochan’s AC Cobra, the Morgans of Peter Garland and John Shaw and the Lotus Elan of John Davison.

Early on the five cars made a great spectacle as they slithered around. But as the race progressed, and the slight rain continued, Pearce was able to edge clear and move away from the thundering Cobra while Davison had a big spin and dropped to the tail of the pack. Though just not able to live with Pearce, Kivlochan still had to push hard to hold off Garland.

The Guards Trophy race featured a battle between Julian Thomas and the Lenham of father and son Simon and Cam Jackson. Thomas went solo in his Chevron B8 and led the early laps from Simon Jackson. Then Jackson handed over to Cam who was able to battle ahead of the Chevron and build a small lead. However, during their stop, the Jacksons had been a little too quick and attracted a drive through penalty for the infringement, and that gave Thomas the margin he needed to secure victory.

With Cam Jackson, Tom McArthur, Ben Mitchell and Samuel Harrison at the front of the grid, the opening Historic FF1600 race was always going to be a thriller. Jackson led the train on lap one from Mitchell, McArthur and a fast starting Jamie Vinall-Meyer in the Jamun T3.

Jackson was out on lap eight when he collided with a slower unseen car in the battle at Club Corner. The damage put the Winkelmann out for the rest of the weekend and it was McArthur who won after many place changes from Mitchell and Harrison with Vinall-Meyer an encouraging fourth. Jackson then accepted Simon Toyne’s generous offer of his Lola T200 for Sunday’s two FF1600 races, as Toyne was never intending to do both days of the event.

From the outset on Saturday, the leading Classic Formula Fords broke away from the chasing pack and were headed by Cam Jackson (still in the Winkelmann at this stage), Henry Chart and Jordan Harrison. Jackson led every lap but the margin was always small as the race for second spot continually changed. Chart made a mistake at Village and ran wide, dropping him to fifth on lap seven and ensuring second place for Harrison as Chart then fought back well to claim the final podium slot.

Jackson started Toyne’s Lola T200 from the back of the second Classic FF1600 grid but in a race of ever changing track conditions was able to battle through with a mighty charge as others had moments. Jordan Harrison, Chart and McArthur all had moments or quick spins and, eventually, Jackson was able to wriggle clear at the front of the pack and go on to win convincingly. 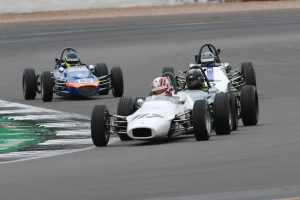 Later, Jackson ran the Lola from the back of the Historic FF grid but could only get to fifth place after the team acknowledged they had made the wrong call on settings for the wet track. Instead, it was Mitchell and Samuel Harrison who mainly disputed the lead once McArthur had spun back down the order. It was Mitchell ahead when it really mattered to take a fine victory but Harrison took profit in championship terms with arch rival McArthur back down in sixth.

The 70s Road Sports race produced a lights to flag victory for Will Plant (Morgan Plus 8) and in his wake there was a thrilling climax. From the start Plant roared into the lead leaving Jim Dean, John Williams, Jeremy Clark and Charles Barter to battle for second. Barter and Dean were side-by-side into Luffield on what proved to the final lap and Barter’s Datsun 240Z got the verdict by a third of a second as Clark and Williams chased them home.

It was V8 power that dominated Gentleman Drivers’ qualifying with Julian Thomas and Calum Lockie in the Cobra Daytona heading the times from Mike Whitaker’s TVR, John Davison’s similar car while the Grahame and James Dodd E-type was the first non-V8.

Whitaker led for the first lap before the Thomas/Lockie combination took over the lead. This reverted back to Whitaker as the pit stops came into play but a late stop by Mike dropped him to an eventual fifth place after a time penalty had been applied. The Dodd E-type took a fine second overall with Davison third.