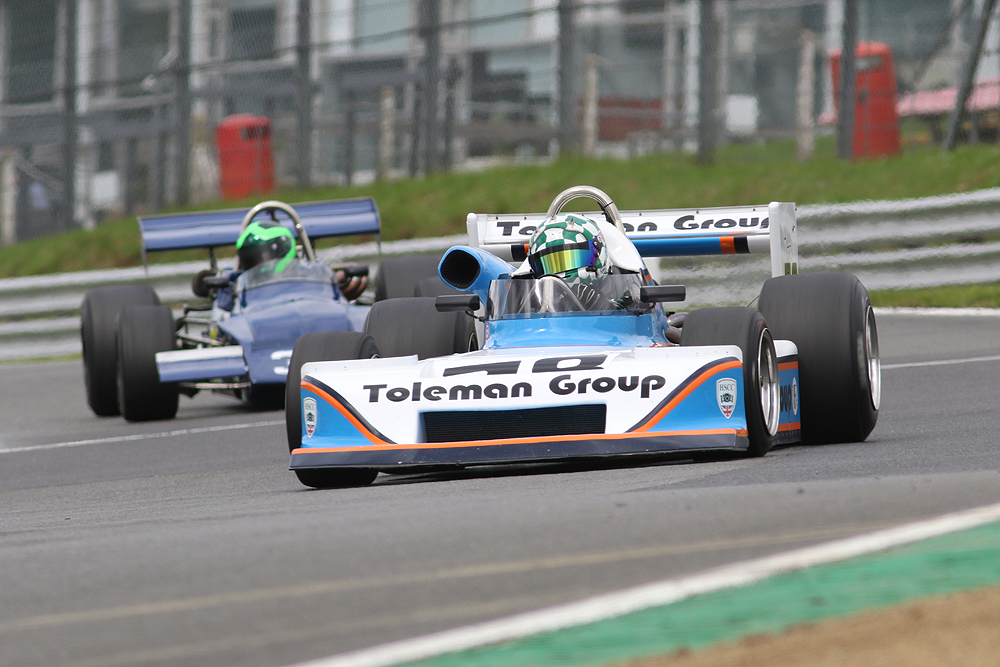 The Historic Sports Car Club’s Legends of Brands Hatch Superprix delivered an outstanding three days of historic race action on both the Indy and Grand Prix circuits at the famous Kent venue (9-11 July).

Conditions on Saturday were particularly challenging when light rain left the track very slippery and a number of red flags and safety car interventions rather disrupted the timetable. However, by moving the first Aurora/Geoff Lees Trophy race to Sunday morning, the programme was completed in full.

It was worth waiting for the opening Aurora and Geoff Lees race because it was a cracking contest on Sunday morning as Matthew Wrigley (March 782) had to work very hard to fend off the charging Martin Stretton (March 712) in a battle of the F2 cars.

The grid was shuffled after a damp and slippery qualifying session on Saturday. But Wrigley quickly stole ahead as Stretton took a little longer to make his way to the front. Then, a safety car period allowed Stretton to home right in on his rival and for the last couple of laps Wrigley had to work hard to fend off his challenger.

Behind them, Mark Charteris (March 742) and Rory Smith, finally making his Geoff Lees Trophy debut in his Ralt RT4, battled over third place with Charteris just getting the verdict. Young Samuel Harrison, who had put his Dallara 389 on pole in the wet dropped back to fifth, but it was still an impressive performance from the teenager.

At the end of Sunday afternoon, the second Aurora/Geoff Lees race was just as good and this time Stretton seized a late opportunity as they lapped slower cars to dive through at Paddock Hill Bend on what proved to be the final lap to beat Wrigley to the line by a third of a second.

Historic Formula Ford 2000 had four races in total comprising two heats and a final on the Indy circuit on Friday, followed by a further race on Saturday on the GP circuit.

Graham Fennymore proved to be the class of the field despite the very best efforts of Ian Pearson, who pushed hard in his Royale RP30. But it was not plain sailing for Fennymore after a scare in his heat when the oil pressure disappeared. Thankfully, it proved to only be a faulty gauge, but he eased his pace massively to ensure the car got home. Some rapid work got the Reynard 81SF ready for the final and he was able to charge through and take advantage of a safety car to close down the lead of Pearson. Fennymore then dived ahead for victory.

Pearson led the chase again on the Grand Prix circuit and harried Fennymore for much of the race, mounting a late challenge into Clearways but Fennymore held on for a double victory. Behind the top two, it was Andrew Storer and the increasingly impressive Molly Dodd who wrapped up the top four on the GP circuit.

The Thundersports race was another excellent contest that ran all the way to the flag after 23 laps of the GP circuit. James Claridge (Chevron B23) and Mark Richardson (Lola T290) battled mightily and fortunes ebbed and flowed through the course of the 40-minute race. Over the second half of the race, Claridge was able to edge out a little margin but Richardson rechallenged in the final laps and got the gap down to just four tenths of a second at the flag after a wonderful battle.

Some way back, Robert Shaw brought his Chevron B19 into third from Simon Watts, while Will Schryver headed the Sports 2000 field in his Royale RP37. Among the GT cars, Neil Merry put his Chevrolet Corvette ahead of the similar car of Peter Hallford and they made a fabulous spectacle in the early laps when they ran nose to tail.

Formula Fords played a major part in the weekend and, ultimately, there were three wins for Cam Jackson but it was never easy. Unfortunately, the opening Historic race on Saturday was ultimately abandoned after two red flags, the second following an incident at Druids which left Ross Drybrough with a hand injury.

In the second Historic race, Jackson had a major challenge from Tom McArthur and the lead change several times before Jackson got back ahead when it mattered. However, McArthur was less than a fifth of a second behind in a race to the line at the end of a splendid battle. Horatio Fitz-Simon went with them once he had wriggled clear of an early battle for third with Samuel Harrison.

In the Classic Formula Fords Jackson won the opener relatively clearly from Henry Chart and Ben Tinkler but in the later race Chart really took the battle to Jackson. In fact, Jackson looked to be in trouble when he found oil at Paddock and slithered through the gravel and dropped back to fifth. But the race was red flagged, and the grid for the restart was taken back a lap, which put Jackson back at the front.

Chart matched him from the restart, and it was only a final lap spin at Stirling’s for Chart that really settled the matter for Jackson, as Tinkler headed Jordan Harrison for a second and Chart dropped to fourth.

Running alongside the Classic FFs were the Historic Formula 3s and there was a double win for Jeremy Timms over Andrew Hibberd. Simon Armer took third in the opening race but went out of the later race when he spun at Paddock.

It was no surprise that Chris Goodwin was the class of Formula Junior field in his Lotus 22 in a race impacted by a safety car. Leading the chase of Goodwin was Clive Richards but he went out at Stirling’s when an oil pipe detached and his engine dumped its oil.

Andy Newall made it three from three in the Guards Trophy at the head of a bumper grid of cars, although the Lenham P70 of Simon and Cam Jackson ran the Chevron close for much of the race. Only after the pit stops did Newall edge clear to take his lead out to slightly more than 10 seconds. Another father and son crew completed the podium as Westie and Ben Mitchell brought their Chevron B8 into third.

The GT battle raged all the way to the flag, as John Spiers and Peter Thompson duelled in their TVR Griffiths. Spiers just about held the upper hand throughout the race, but Thompson kept him keen and closed in again over the final lap to finish only a third of a second behind. 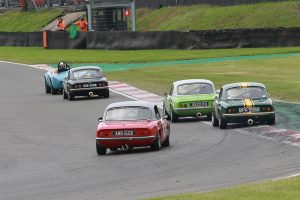 Kevin Kivlochan had his hands full in the historic Road Sports contest as John Davison again mounted a spirited attack in his Lotus Elan. Kivlochan edged a little clear of the Elan pack initially, but Davison never gave up and had the gap down to less than three quarters of a second at the flag as Rupert Ashdown, Jonathan Rose and Fraser Gibney packed out the top five in their Elans.

The 70s Road Sports race was briefly interrupted by a safety car. Will Plant (Morgan Plus 8) resumed control from the re-start but Jim Dean had other ideas in his Lotus Europa and hunted down the Morgan over the final laps to finish just 18 hundredths of a second adrift in a thrilling last lap dash to the line. Will’s father, Richard, narrowly took third but had to work hard to see off Dave Karaskas (TVR 3000M) and John Williams (Porsche 911).

Classic F3 honours were shared between Benn Tilley and Andrew Smith, with Smith going out of the first race on Friday due to a chronic misfire but he was able to return and win convincingly in damp conditions on Saturday. One of the other stars was Murray Shepherd in his Classic FF2000 Van Diemen who finished second overall in the damp to dominate the category.

Mark Charteris was the class of Friday’s Classic Clubmans race and won at a canter as John Harrison led the pursuit. After a troubled qualifying, Spencer McCarthy battled up to third in his Mallock while Tom Muirhead saw off Stephen Littler to win Class B.

On Sunday afternoon Steve Soper was the class of the Historic Touring Car Championship in his Ford Mustang. He went clear of regular winner Dan Williamson for a resounding win, while Williamson lost second on the penultimate lap with an off at Druids in his Ford Falcon.

Guest races from the HGPCA brought out more than 30 glorious Pre ‘66 Grand Prix cars and HSCC racers featured prominently. John Spiers won the opening race for front-engined cars in his ex-Behra Maserati 250F, while Sam Wilson was easily the class of the rear-engined pack in John Chisholm’s Lotus 18. Wrapping up the racing was Friday’s Champion of Brands Formula Ford contest which was convincingly won by Matt Rivett from James Hadfield.