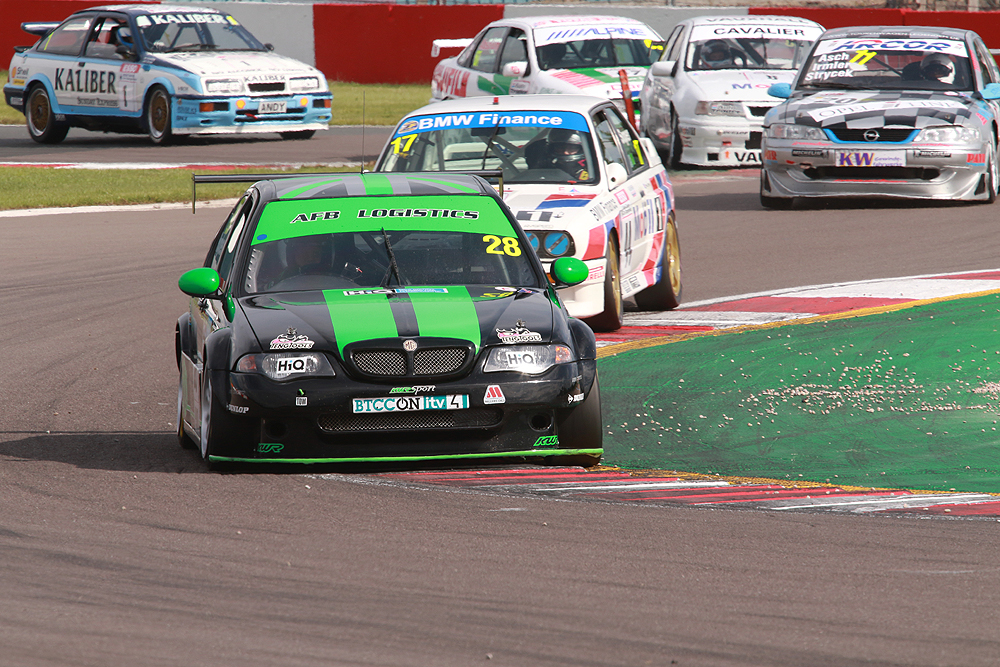 Stewart Whyte was the toast of the Historic Sports Car Club Dunlop Saloon Car Cup during the second race weekend of the season at the Masters Race Weekend at Donington Park (June 8/9).

On his first race outing of the season, the Scotsman shadowed Ric Wood (Holden Commodore) home in the first race and then claimed a clear victory in the second race in his Super Touring Honda Accord.

A representative and varied grid of saloon cars lined up for races three and four of the new DSCC and, in a damp but drying qualifying session, Julian Thomas took pole in his mighty Ford Sierra RS500 Cosworth. Mark Wright was third best and Paul Mensley was ninth to make it three RS500s in the top 10.

Wood elected to start the invitation class Holden from the pit road in the first of two races on Sunday and was soon working his way up the order. In the later part of the race he was able to ease ahead of Whyte to take victory as the Super Touring Honda pulled clear of the rest of the field to win the David Leslie Trophy. For many laps, the RS500s of White and Thomas enacted a glorious battle for third and it was Wright who took the place and the Tim Harvey Trophy after Thomas had his engine cut out a couple of times. “That was a great race and it was nice to be on a par with Julian: they are fantastic cars to drive,” said Wright.

With Wood not starting the second race, Whyte had a clear run to victory as Wright completed his best weekend to date with the RS500 by taking second place. Meanwhile, from the tail of the grid Thomas made impressive progress to work up to third place as Smith and Hughes had a great battle for fourth. Unfortunately, Smith posted a late retirement as the car coasted to a smoky halt at the Esses.

The Absolom/Irmler/Fielding contest was rejoined but ended early when Irmler slid into the gravel at Coppice and Fielding retired to the pits. Instead double Tom Walkinshaw Trophy winner George Pochciol (Ford Capri) rounded out the top six.

The DSCC season continues on the Brands Hatch Grand Prix circuit on 29/30 June during the HSCC Legends of Brands race meeting.