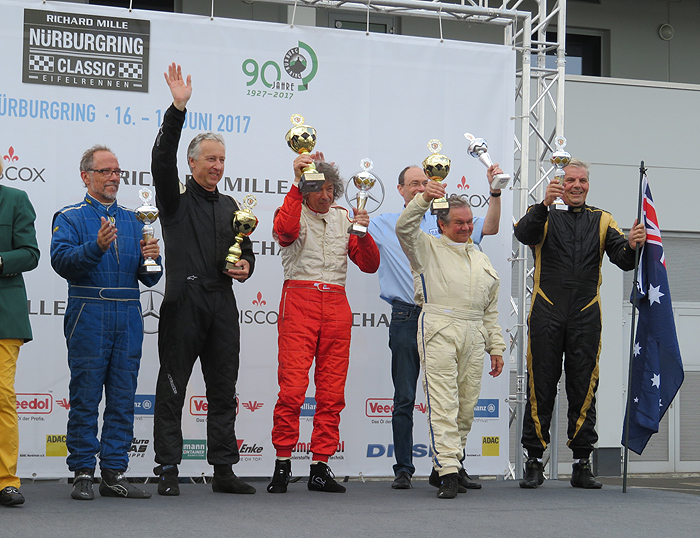 Jeremy Wheatley and Robert Simac shared the major spoils at the Nurburgring during rounds three and four of the HSCC Historic Formula 2 FIA-sanctioned International Series (16-18 June).

Historic F2 racers from across Europe raced on the modern Grand Prix track at the famous German venue, exactly 90 years to the day that the 14-mile Nordschleife track opened in 1927.

With expected pacesetter and round two winner Richard Evans (March 742) sidelined after qualifying with a holed radiator, the way was left open for an elated Wheatley to score a memorable debut Historic F2 win in his ex-works Surtees TS15. However, it was incredibly close at the finish as leading 1600cc contender Simac (March 712M) was only a quarter of a second behind after being hit by a puncture.

Wheatley headed the Bruno Giacomelli Trophy Class C for 2-litre F2 cars from up to 1978 while Simac again topped the Jochen Rindt Trophy Class A for 1600cc F2 cars from 1967 to 1971. In a very close finish, Alain Lagache (March 712M) just pipped Luciano Arnold (Brabham BT36) for second in the Rindt class.

In Sunday’s second race, it was the turn of Wheatley to pick up a puncture, so Simac took an impressive overall win as Lagache again narrowly beat Arnold for second place. Wheatley struggled home a class-winning fourth, while Australian Steve Weller just beat countryman Kuchel to win class D. It was Weller’s first ever podium.

Despite hot and humid conditions, the Historic F2 pack had put on a great show and the teams and drivers enjoyed an excellent social atmosphere in the paddock. A Formula 2 barbecue on Friday evening, hosted by Brabham BT36 racer Klaus Bergs, capped the weekend.

The focus for Historic Formula 2 will now switch to France and the first Grand Prix de France Historique at Magny Cours over the weekend of 1/2 July. This major new racing festival promises to be one of the highlights of the 2017 historic racing season under the patronage of Jean Alesi. Historic F2 has a prominent place on the programme, which celebrates the history of single-seater racing.