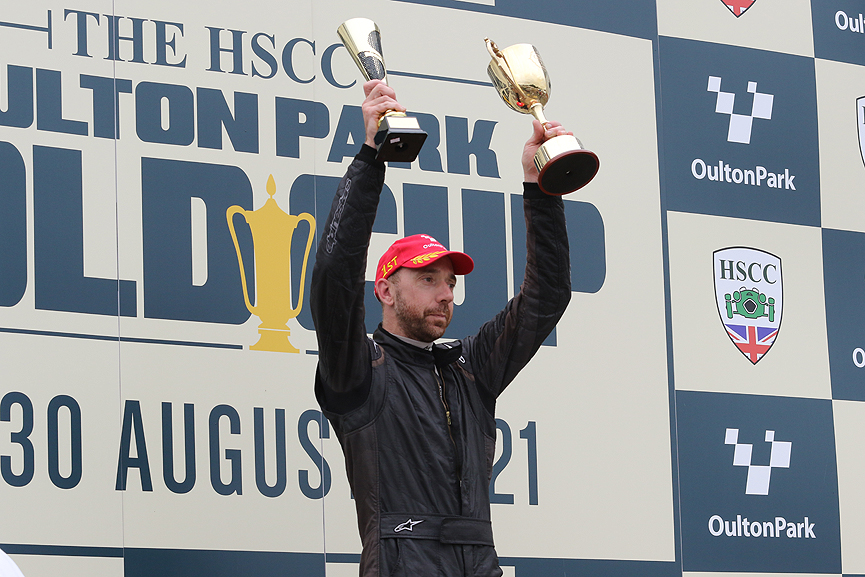 With bumper grids for most races, fine weather, a large and enthusiastic crowd and lots of off-track attractions, it all added to a great weekend of historic racing with 21 races across Sunday and Monday.

Star billing went to two races for the HSCC Historic Formula 2 Championship, with the aggregate winner being awarded the hugely prestigious Gold Cup. Ultimately, it was Matthew Watts who took the big prize after victory in the second race backed up a third overall in the opener. On Sunday, Andrew Smith just had the legs of Miles Griffiths (Ralt RT1) to take a resounding win in his March 742 as Watts chased them home from a little distance back.

Griffiths led the early laps on Monday from Smith but the leading Ralt RT1 suddenly cut out at the Knickerbrook chicane and Smith could not avoid contact. While Griffiths retired, Smith pressed on but with a damaged nose cone but eventually retired with engine issues. 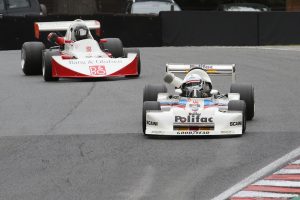 Meanwhile, Watts had been running them very close and took over the lead but with Mark Dwyer (March 742) chasing. Dwyer got closer and closer but was then forced out with a major engine issue, leaving Watts a clear victor and winner of the Gold Cup.

Dwyer took his consolation with a double victory in the Aurora Trophy, which also included the Classic Formula 3 contenders. On Sunday Dwyer went clear and stayed ahead as Rory Smith (Ralt RT4) mounted a spirited chase, having started at the back of the grid after clutch problems in qualifying.

Smith got through into the top three but was classified sixth when the result was taken back a lap and it was young Samuel Harrison who was classified second in his F3 Dallara from the Geoff Lees Trophy. Andrew Smith, now in his March 783 was best of the Classic F3 runners from Benn Tilley (March 743). On Monday, Dwyer led from the start as Rory Smith stormed through from sixth to second in the Geoff Lees Trophy section. Harrison was third as Andrew Smith again headed the Classic F3 runners.

The opening laps of the Guards Trophy featured a great contest between Andy Newall in his Chevron B6 and Ben Tusting in the family Lenham. Newall knew that the race would come to him once Ben handed the Lenham over to his father Robert and when Robert had a spin on his out lap, Newell was left with a handy lead. Up to second with a stirring drive came the B8 of Westie and Ben Mitchell.

Tom McArthur claimed the Paul Simms Memorial Trophy with two hard fought Historic Formula Ford wins. McArthur had things easier in the first race once he had escaped the clutches of Horatio Fitz-Simon and Callum Grant, leaving them to battle mightily for second. In the second race later on Sunday it was much closer and McArthur was never able to make the break as Grant and Fitz-Simon fought him all the way to the flag.

Warren Briggs was a double winner in Historic Touring Cars despite the very best efforts of Neil Wood and his Anglia, which kept the Mustang under constant pressure across both of Monday’s races. Wood duly took second in both races, while Graham Pattle (Lotus Cortina) and Peter Hallford (Ford Mustang) each had a podium visit. 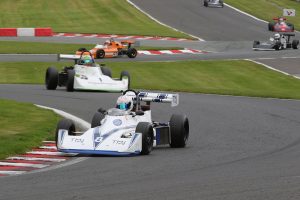 From a bumper grid of Historic Formula Ford 2000s Graham Fennymore went clear at a canter from Drew Cameron and Andrew Park. In the second race, Benn Simms started from the back after retiring from the opener and stormed through to third place behind Fennymore and Park. Cameron took fourth but had his hands full of the hugely impressive Molly Dodd, who worked her Royale up to a fighting fifth place.

Clive Richards was the star of the Formula Juniors, winning both races in fine style on Sunday afternoon. In the first race Nick Fennell and Adrian Russell brought their Lotuses up to complete the podium. At the end of the afternoon Richards did it again as Mark Shaw (Brabham BT6) led the chase. Nic Carlton-Smith took another double class win to tighten his grip on the overall title.

No one had any answer to the pace of Jeremy Timms in Historic Formula 3 who took two commanding victories over a good looking field. However, things were far from settled behind Timms as Ian Bankhurst, Christoph Widmer and Simon Armer had two wonderful battles. In the first race, the three cars crossed the line split by half a second in a fabulous finish with Bankhurst just ahead. 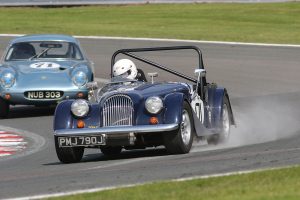 The bumper Historic Road Sports pack had a single longer race on Sunday and it was Kevin Kivlochan who got the jump from the start by putting his AC Cobra ahead of the Lotus Elan of constant rival John Davison. That’s how they finished with Rupert Ashdown’s Elan rounding out the overall podium in third, albeit some way back.

The Classic Formula Ford 1600 pack shared their first race with the Heritage and Open cars and it was a mighty contest between Jordan Harrison and Henry Chart that made the headlines. Harrison just kept his Lola ahead of Chart’s Van Diemen but it was never settled. Jake Shortland who had the rare Lola T440 going better than ever to fend off Ian Parkington in the ex-Tiff Needell Crossle, Rick Morris and Joseph Ahrens from a fine battle.

In the second race Chart was an early retirement and that ensured a resounding win for Harrison, as Parkington came up for a great second from Shortland and Ahrens.

The 70s Road Sports race went with form as Will Plant stormed to another victory despite a mid-race safety car. Jim Dean kept the Lotus Europa within reach of the Morgan, but Plant was never too seriously troubled as John Williams brought his Porsche 911SC up to third place.

Simon Garrad blitzed the opening race for the Dunlop Saloon Car Cup in his Nissan Skyline as the Sierra RS500s of Dave Coyne and David Tomlin battled for second. Unfortunately, Garrad was side-lined from the second race with a worsening misfire, so Ric Wood, running his Holden Commodore in the invitation class after his Nissan hit problems in qualifying, took over for victory from Mark Wright, now in his RS500 after Coyne raced it in the opener.