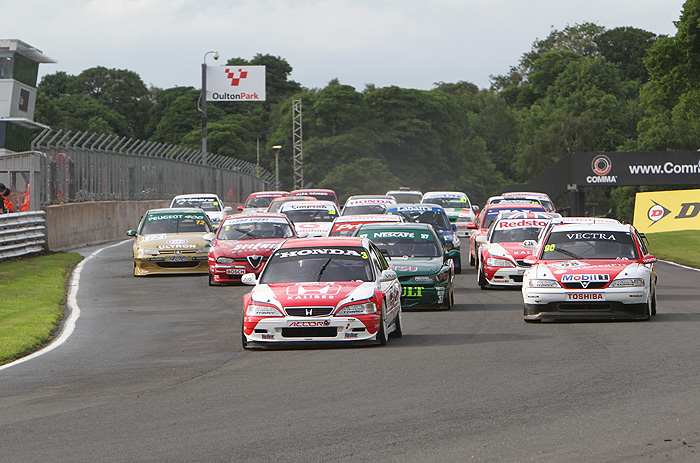 In a busy weekend for the Historic Sports Car Club (7/8 June), Chris Ward and Alex Buncombe took a commanding victory in the Autosport three-hour race at Snetterton, while James Dodd bagged an impressive double win as the HSCC’s Super Touring Trophy supported the contemporary BTCC at Oulton Park.

At Snetterton, a bumper grid for the annual Autosport three-hour, which included a strong contingent from the GT and Sports Car Cup, battled wet conditions as the combined driving talent of Ward and Buncombe proved unstoppable. They eventually took their Jaguar E-type to victory with two laps in hand after 66 laps of the Snetterton 300 circuit.

Into second went father and son Denis and Jeremy Welch (Austin Healey 3000) while Mark Halstead and Stuart McPherson bagged a fine third in their Lotus Elan. Winners of the ‘drivers of the race’ award were MGB crew Brian Lambert and Joe Ward who suffered engine problems in testing on Friday. They missed qualifying while the car was fixed by the engine builder and then raced to seventh overall from the back of the grid.

In the hour-long race for sports-racing cars, Marcus Mussa powered his McLaren M1B to victory over the Chevron B8 of Steve Hodges. Other notable winners included friends and rivals Jon Milicevic (Cooper T59) and Sam Wilson (Lotus 20/22) who shared Formula Junior spoils.

However, it was the Historic FF1600 Championship that delivered the greatest excitement. In the opening race, Max Bartell (Merlyn Mk20) beat Benn Simms (Jomo) by just a fifth of a second, but in the later race it was almost a dead-heat as Simms beat Westie Mitchell (Merlyn Mk20) by the smallest of margins: just a thousandth of a second! Bartell was third, only four-tenths of a second behind in a thrilling finish.

Meanwhile, over at Oulton Park, the HSCC’s Super Touring Trophy raced in front of a huge BTCC crowd and it was James Dodd (Honda Accord) who saw off a determined challenge from former BTCC champion John Cleland (Vauxhall Vectra) to score a double victory. In some crowd-pleasing racing, Simon Garrad (Renault Laguna) and Stewart Whyte (Honda Accord) each claimed a third place.