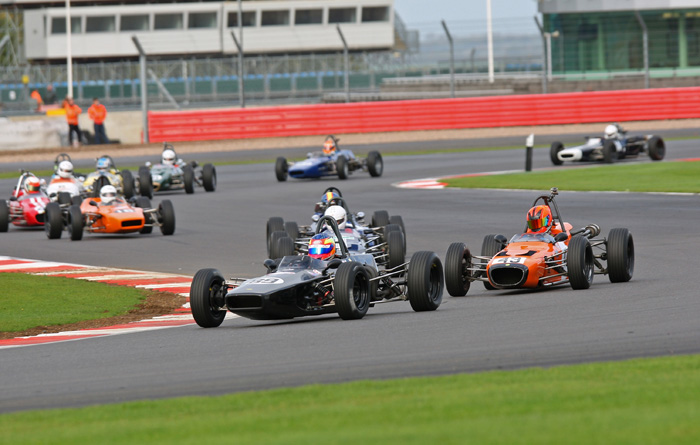 Shaw started the season in his ex-Piquet Ralt RT1 but missed four championship rounds after the car was damaged at Monaco. He returned with the ex-Mike White March 803B at Brands Hatch in July and took four maximum scores across the second half of the season, including victory on Saturday, to narrowly overhaul long time championship leader Marcus Mussa (March 763).

Meanwhile, Welshman Davies retained the ByBox Historic Touring Car Championship title with a fighting second overall and class win in his Lotus Cortina. The re-started race was won by Warren Briggs (Ford Mustang) with Davies less than two seconds behind in the right position to win the title. Simon Benoy (Hillman Imp) did all he could by winning his class once more, but it was not enough to take the title.

Peter Shaw toured home at tail of the 70s Road Sports Championship field in his TVR Tuscan to clinch the title as Charles Barter (Datsun 240Z) won the race. A class win for out-going champion Oliver Ford (Lotus Europa) left him runner-up to Shaw in the final standings.

Meanwhile John Shaw retained his Historic Road Sports Championship title with another class win in his Porsche 911 from a 30-car field. The race win went to Matthew Truelove (TVR Griffith).

Ian Jones claimed another race win in the Classic Racing Car Championship in his Lotus 59, while Steve Seaman (Brabham BT21) was the best of the 1-litre F3 cars. In the Derek Bell Trophy, Neil Glover scored a commanding victory in his newly-acquired ex-Peter Gethin Formula 5000 Chevron B37. In what was only intended as a shakedown run, Glover charged well clear in the ex-Simon Hadfield car.

Sam Wilson topped the Miller Oils Historic Formula Junior pack to win from the similar Cooper T59 of his friend and rival Jon Milicevic while Will Mitcham (Mallock U2) headed the front-engined cars. Milicevic also claimed the overall title.

The final Historic Formula Ford 1600 Championship was an absolute barn-stormer as a superb 34-car grid delivered another fabulous race. In a blanket finish, former multiple champion Neil Fowler (Lola T200) beat former champion Callum Grant (Merlyn Mk20A) by 69-thousandths of a second with Mark Draghicescu (Merlyn MK20) right behind. “There was a bit of peer pressure from within the team to do this weekend,” said Fowler, who last raced regularly in the category in 2007. “I’ve had some great races but that was awesome,” said Grant.

Finally, the Guards Trophy season concluded with a 20-minute sprint race and victory for Will Schryver in his father’s Chevron B6. However, his task was made easier when a fierce mid-race challenge from James Dodd (Ginetta G16) ended in retirement. Bob Brooks (TVR Griffith) headed the GT cars.