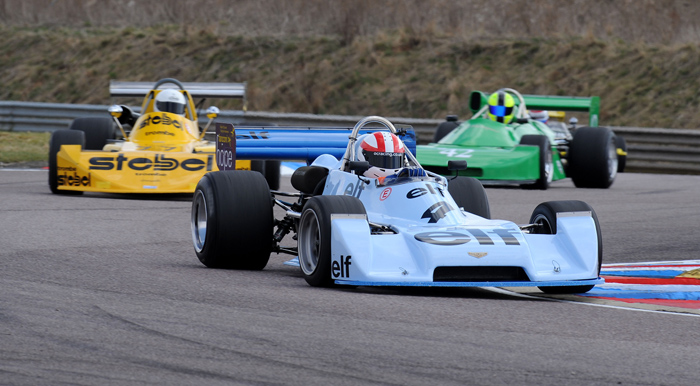 Martin O’Connell and Nick Fleming were the stars of the weekend during the inaugural Thruxton Easter Revival Meeting (30/31 March) organised by the Historic Sports Car Club.

With a record entry of 280 cars and some excellent racing to warm up the spectators on a very cold weekend, the meeting marked the 45th anniversary of the first Formula 2 event at the Hampshire track in 1968, won by Jochen Rindt in his Brabham BT23C.

Nick Fleming won the first part of the Jochen Rindt Trophy in a close finish with Martin O’Connell’s Chevron after a dramatic moment between the cars at the Club Chicane. On Sunday, O’Connell won from Andrew Smith and collected the Rindt Trophy from Murray Walker, who had commentated at the very earliest motorbike race meetings at Thruxton in 1950.

It was also a win apiece in the Martini Trophy races, with O’Connell winning the opener in a contest of Chevron B36s. Fleming won Sunday’s race as a mighty drive from Ray Mallock too his invitation class Mallock Mk18 into second place overall. Mallock raced in the European Formula 2 races at Thruxton in 1975 and ’76.

Nelson Rowe took his second win of the season in Historic FF1600, with Benn Simms second and Tiff Needell bagging a podium place on his first FF race for four decades. Rowe also took the Historic FF2000 win, but only narrowly from flying teenager Callum Grant.

The first Super Touring Trophy event was marked by a double win for Stewart Whyte (Honda Accord) and it was Richard Dutton who edged Mike Gardiner in a battle of the American V8s in the Historic Touring Car race.

Ian Jones added another win in Classic Racing Cars and Andrew Hibberd took a classy Formula Junior victory in his Lotus 22. Neil Burroughs, racing the car for only the second time, was the class of the 36-car Guards Trophy field in his Chevron B8.

The 70s Road Sports contest was marked by a first win for David Tomlin in his Ferrari 308GTB and in Historic Road Sports it was Roger Waite who beat Peter Shaw in a battle of the Lotus Elans.