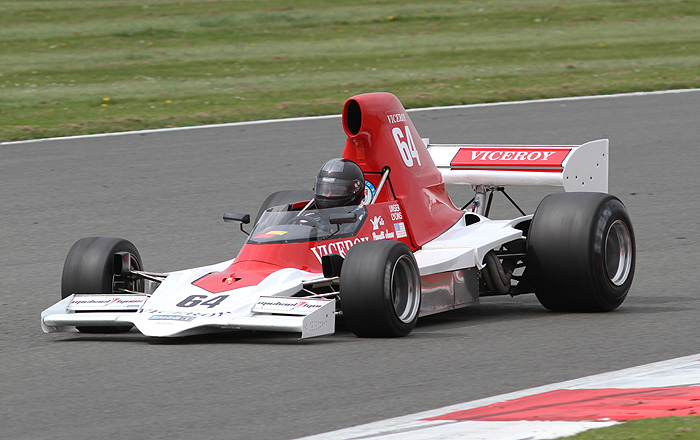 A fabulous 18-race programme from the Historic Sports Car Club will feature at the second Thruxton Easter Revival (Saturday/Sunday 19/20 April) as the Hampshire track welcomes a fine entry of classic and historic single-seaters, sports, GT and touring cars.

At least five of mighty Formula 5000s in the Derek Bell Trophy races will take older fans back to the 1970s and a star car will be the ex-Peter Gethin Chevron B24 raced by current FIA Historic Formula 1 champion Greg Thornton. After being badly damaged in a workshop fire in June 2012, this will be the famous car’s first race since a total rebuild.

Up against Thornton will go F5000 prime-mover Frank Lyons (Gurney Eagle FA74) and the Chevron B24 of Paul Campfield. Former Grand Prix racer, and acknowledged F5000 ace in period, Ian Ashley is a welcome addition to the pack in a Lola T300, while reigning DBT winner Neil Glover is back to defend his crown with his Lola T332.

Amongst a bumper 25-car field for the pair of Derek Bell Trophy races will be US-based former F2 racer James King, who now campaigns a March 712 from the 1600cc era of Formula 2 in the early 1970s. The Formula 2 cars in the field will be competing for the prestigious Jochen Rindt Trophy: this BARC trophy was first presented over 40 years ago in honour of the Austrian racer who dominated early European F2 races at Thruxton after the circuit first opened in 1968.

One of the quickest cars of all could be the Formula 2 March 782 of Neil Fowler: the 782 was a winner in European F2 races at Thruxton in 1978 (Bruno Giacomelli) and 1979 (Rad Dougall) and Fowler is a single-seater ace who will shine despite limited knowledge of the car. Over from Australia comes Martin Bullock with his Chevron B17, while veteran racer and renowned aviator Robs Lamplough fields a rare Formula B Winkelmann WDB2. Lamplough raced Formula 2 cars at Thruxton during the circuit’s early years.

A firm favourite with fans will be the opening event for the HSCC Super Touring Trophy for the spectacular cars from the 1990s BTCC. Carrying number 1 is the Honda Accord of 2013 trophy winner Stewart Whyte. However, this is not the car he used last season; this is a later ex-Tom Kristensen car from 2000 and will surely set the bar very high in the capable hands of the Scottish ace.

John Cleland (Vauxhall Vectra) and Patrick Watts (Peugeot 406) need little introduction: both were aces of the era and Cleland was champion for Vauxhall in 1995. Joining them on the grid is Nick Whale, another period BTCC racer, back at the wheel of a BMW M3.

Ranged against them are drivers like young James Dodd, already a race winner in another Honda Accord, and dark horse Simon Garrad in one of the Williams-built Renault Lagunas from the ’99 season.

Alongside the Super Touring Trophy races, there will be further tin top excitement with two races for the ByBox Historic Touring Car Championship headed by the Ford Lotus Cortina of defending champion Tim Davies and the Ford Mustang of Neil Brown.

Two 40-minute endurance races for the Guards Trophy feature on Saturday, with the field split between sports-racing cars and GT cars. McLaren test driver Chris Goodwin heads the sports-racing car entry with his McLaren M1B though Graeme and James Dodd were victorious at Donington earlier this month in their Ginetta G16. As usual, they will have to contend with a gaggle of Chevron B8s including those of Philip Nelson, Charles Allison and Stephen Jones who shares his example with Thruxton circuit manager Pat Blakeney. In the GT section of the Guards Trophy, Mike Whitaker’s remarkably well-sorted TVR should set the absolute standard.

The 70s Road Sports Championship kicks off the action as the first race on Saturday with the Lotus Europa of reigning champion Oliver Ford heading the entry. A fabulous 34-car field for round two of the Historic Road Sports Championship will be in action on Sunday with Richard Plant, Robin Pierce and Kevin Kivlochan heading the entries in Morgan Plus 8s.

The HSCC Historic Formula Ford 1600 Championship has a double-header weekend and it is Benn Simms who heads to Thruxton with the early points’ lead after a resounding win at Donington Park. His rivals will include local ace and TV presenter Tiff Needell in his Lotus 69.

Another double-header makes up rounds two and three of the Millers Oils Historic Formula Junior Championship and it is difficult to see anyone matching the pace of David Methley in his Brabham BT6.

The opening Classic Formula 3 Championship counter is headed by former champion Jamie Brashaw in his ex-Kenny Acheson March 793 and joining him in the entry is the ex-Martin Brundle car of Chris Drake. David Shaw is back with his ex-Nelson Piquet Ralt RT1 and Richard Trott will be a contender in his ex-Siegfried Stohr Chevron B43. Meanwhile, Ian Jones heads the field for round two of the Classic Racing Car Championship in his Lotus 59.

A strong field will assemble for the Talos Art Foundry-supported round of the Historic Formula Ford 2000 Championship with Benn Simms at the head of the early points after victory at Donington Park. Then, he borrowed the Reynard of Stuart Boyer to win but Simms hopes to be in his own Royale RP30 for Thruxton.

Finally, the Classic Clubmans Championship will be making its Thruxton debut with the HSCC. Ray Mallock heads the entry in the Mallock Mk18b, but will face a mighty challenge from drivers like Mark Charteris and John Harrison in these incredibly quick front-engined sports-racing cars.

On Saturday, the first of eight races is at 13.20 after qualifying from 9am.

On Sunday, the first of ten races is at 12.30 after qualifying from 9am.

For more details about Thruxton, please go to www.thruxtonracing.co.uk Adult admission is from £10.