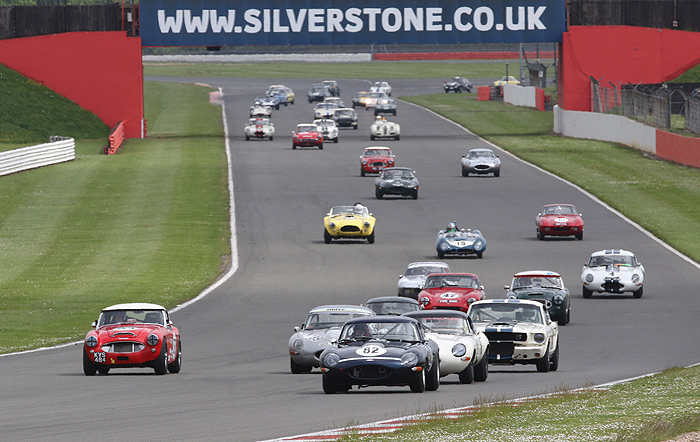 A weekend of tremendous racing on the Silverstone Grand Prix circuit made the International Trophy (21/22 May) another hugely successful event in the Historic Sports Car Club’s 50th anniversary season.

Despite difficult weather conditions during Saturday, over 430 competitors took part in 14 races with close finishes and excellent across two very full days. The chance to compete on the full Grand Prix circuit made it a special weekend for many racers.

Highlights included a double win for Michael Lyons in the McLaren M26 with which James Hunt won the 1977 British Grand Prix, three wins for Leo Voyazides and an epic Jaguar Classic Challenge victory for Julian Thomas and Calum Lockie.

Lyons was racing in a double-header season-opener for the Derek Bell Trophy, which included the Classic F3 Championship, and a fabulous field of rapid single-seaters gathered for the weekend. Andrew Smith’s Formula Atlantic March 79B was the closest challenger to the F1 car and in the rain of Saturday Smith was able to keep Lyons in sight. However, in the dry on Sunday Lyons romped clear in the famous car.

In the concurrent Classic F3 contests, father and son Simon and Dominik Jackson took a win apiece, with Dominik winning on Saturday in his March 803 after a long break from racing.

There was also family rivalry in the 70s Road Sports Championship, run in Saturday’s rain. Julian Barter guested in Jim Dean’s Lotus Europa and was able to keep the Datsun 240Z of his father Charles at arm’s length as he found the Europa superbly balanced in the conditions.

Later, the Historic Road Sports Championship delivered a close finish as Peter Shaw just held off the fast-closing John Davison in a battle of the Lotus Elans. There was only a quarter of a second in it at the flag as Robin Pearce took his Morgan to third and Kevin Kivlochan battled up from the back of the grid to fourth place after qualifying problems.

George Tizzard had his dad Stuart’s Lenham Spyder all to himself for the Guards Trophy race and he made good use of it to overhaul the Martin O’Connell/Sandy Watson Chevron B8 and win the 40-minute race. “The car was amazing; I’m just lucky to drive it,” said Tizzard. Watson, meanwhile, had to nurse a B8 that was short on tyres and brakes. Best of the GT pack was Mike Whitaker and his task was eased when the similar TVR Griffith of Mike Gardiner/Dan Cox lost its front bodywork in a clash in traffic.

Sam Wilson (Lotus 20/22) was the class of the Formula Junior field and took a double win, although Cameron Jackson was unfortunate to lose out on Saturday when a suspension problem halted his Brabham BT2. Jack Woodhouse, on his Brabham debut in the BT6 of John Truslove, and Andrew Hibberd (Lotus 22) led the chase, though Hibberd was down the order a little on Saturday after a spin.

Historic Formula 3 Championship debutant Jon Milicevic took a commanding Historic F3 win in his just-finished Brabham BT21B and dedicated the win to his mate Sam Wilson who got an engine together for the Brabham in just 48 hours in the run up to the race. Simon Armer (March 703) was strong on a briefly slippery track and edged ahead of Peter Thompson (Brabham BT21) for second.

Ian Pearson and Andrew Park took the spoils in the combined Classic and Historic FF2000 contest that wrapped up a busy weekend. Pearson was able to ease clear of a big battle for second as Park and Nelson Rowe contested the Historic division with Classic racer Mark Mercer watching from close quarters. Park eventually got the nod to make it two Historic wins from two rounds but it had taken a mighty effort from many people to get his car fixed after it was damaged in testing on Friday.

The Historic FF1600 Championship field had a very slippery track on Saturday but some exemplary driving delivered a remarkably clean race. It all finally came down to the last couple of corners as Benn Simms was reeled in by Rob Wainwright as they threaded through backmarkers. Wainwright saved his best for the end and managed to run side-by-side with Simms towards Luffield and drive ahead. “Over the last two laps it seemed to be wetter but the car felt better,” said Wainwright after a fine performance. Teenager Benn Tilley was impressive once more as he raced his Merlyn in the wet for the first time to head Mark Shaw and take the final podium position while Sam Binfield drove a blinder for his best result to date in fifth in his Titan Mk6.

Voyazides won both the ByBox Historic Touring Car Championship round and the Pre ’80 Endurance race, albeit in very different cars. In the touring cars, he took his Ford Falcon clear of a fine field of cars and edged away as Warren Briggs (Ford Mustang) and Andy Wolfe (Lotus Cortina) battled hard for second and Briggs had to push to repel the Cortina. Endaf Owens (Mini Cooper) and Simon Benoy (Hillman Imp) headed the smaller cars.

The Pre ’80 Endurance race was all about the gorgeous Lola T280 that Voyazides shared with Andy Wolfe. From a strong and varied grid, Martin O’Connell led away in his Chevron B19, but even O’Connell’s talents could not keep the DFV-powered Lola at bay for too long. Voyazides did the first stint before hopping out and handing the car over to Wolfe to finish the job.

Julian Thomas and Calum Lockie scored a tremendous victory in the Jaguar Classic Challenge and were unlucky not to back it up with a GT and Sports Car Cup win. Lockie did the opening stint in the 40-minute Jaguar race before Thomas took over during a mid-race safety car period to battle to the finish with fellow E-type racers Martin Stretton and John Pearson. On the penultimate lap Thomas briefly dropped to third but got down inside Stretton under braking for Brooklands. They were almost side-by-side through Woodcote and Thomas got the win by a quarter of a second with Pearson close behind in third.

On Sunday, Lockie and Thomas were on target to add GTSCC spoils as Lockie had just taken the lead from the AC Cobra of Leo Voyazides and Andy Wolfe when the race was red flagged after Brian Lambert rolled his MGB at Club, fortunately without injury.

The results were taken back a lap and handed victory to Voyazides and Wolfe. Right in contention from a magnificent 50-car grid when the race was halted was the Lister Jaguar of Tony Wood and Will Nuthall, while Jeremy Welch and Martyn Corfield were the best of the smaller-engined cars in their Austin Healey 3000.