Superb Finals for HSCC at Silverstone 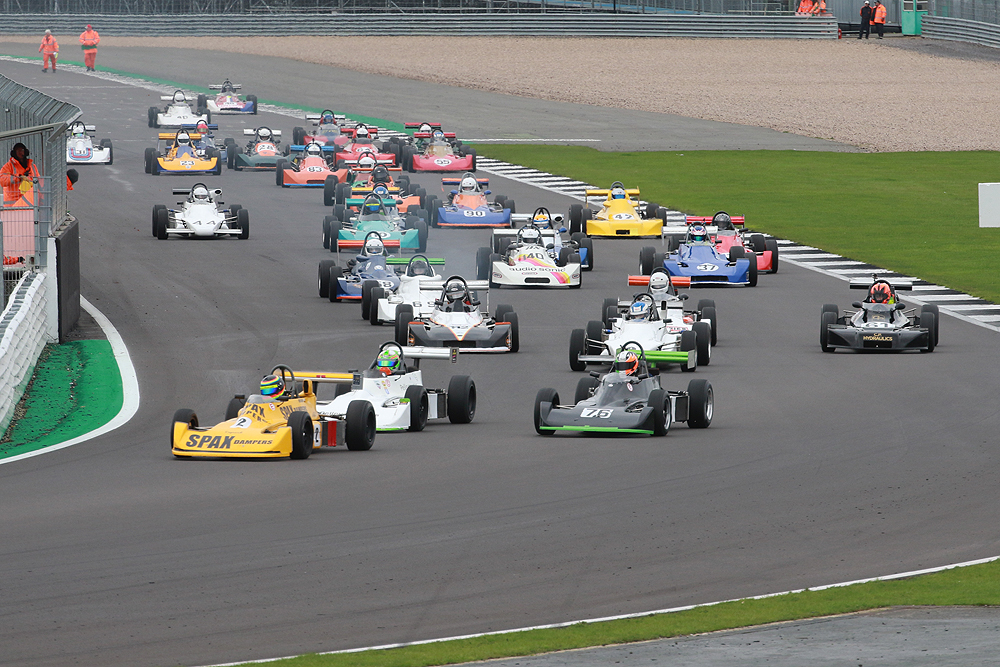 In a weekend of thrilling racing and close finishes across 21 races and 280 entries, a number of season-long contests were settled including in a bumper grid of Historic Formula Ford 2000s where Andrew Park sealed a fourth straight crown. Chris Drake (front-engined) and Andrew Taylor (rear-engined) were the key winners in Formula Junior, while Simon Armer sealed the Historic F3 title in his March 703.

The Historic Touring Car title was shared between Roger Stanford and Bob Bullen, while Mark Charteris and Barry Webb claimed their respective categories in Classic Clubmans, with Charteris taking his sixth title in a row. Ross Hyett (Guards Trophy) and Ben Stiles (Classic FF2000) and Rob Smith (Over 50s FF1600) were the other winners across a glorious weekend of racing on the Silverstone National circuit.

The first Historic Formula Ford race on Saturday was sensational as up to a dozen cars contested a slip-streaming thriller. Ultimately, Cameron Jackson scored his 11th win from 14 starts in the Winkelmann as he edged Linton Stutely by just seven-thousandths of a second after a race that had onlookers holding their breath. 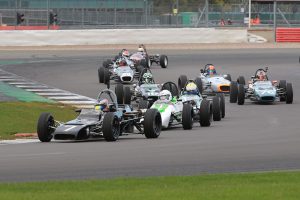 Initially, Jackson and Stutely (Royale RP3) went up against the Speedsport Merlyns of Ed Thurston, Pierre Livingston and Ben Tusting with up to seven more cars towing along. This was fabulous wheel-to-wheel racing and finally it came down to Jackson, Stutely and Thurston on the sprint to the flag. It took all of Jackson’s race craft to stay ahead as Stutely came so close to snatching victory. “That was awesome,” said Jackson. “I looked in the mirrors at one point and saw a never-ending train of cars behind me!”

“I got alongside on the last lap but couldn’t outbrake him,” said Stutely, while Thurston chased them over the line. A few yards back, Livingston just beat Brian Morris, Matt Wrigley, Tusting and Ted Pearson.

Sunday’s re-started race was just as good as Jackson, Stutely and Livingston finally wriggled clear of the pack and this time Jackson beat Stutely to the line by 42-hundredths of a second after Stutely did all he could to unseat the champion. With Pearson unfortunately eliminated in a first-lap tangle, Smith was clear to secure the Over 50s title.

Jackson dominated the rear-engined Formula Junior races in his Brabham BT2. US racer Tim da Silva offered a persistent pursuit but had slipped six seconds back at the flag on Saturday. Sunday’s result was similar as Jackson took his weekend tally to four race wins at the conclusion of a remarkable season.

Da Silva and Wrigley were also involved in a mighty XL Aurora Trophy race on Saturday as their Formula 2 cars went up against the Formula 5000 Lola T300 of Michael Lyons. The trio made a glorious spectacle across the early laps before Da Silva went out with a failed input shaft and Wrigley squeezed clear of the hard-charging Lyons.

With Da Silva and Lyons (due to diff problems) absent on Sunday, Wrigley still didn’t have it easy as Andrew Hibberd drove a mighty race in his Brabham BT38 to give the newer car a major challenge. Hibberd spent some laps in front and led into the final corner but Wrigley responded and got to the line a tenth of a second before his rival.

In a busy day, Hibberd celebrated recent parenthood by taking both Historic F3 race wins on Sunday in his Brabham BT18 as rival Jon Milicevic (BT21B) was forced out of both races with an electrical gremlin. Third and fourth places, in a bid to keep out of trouble, were enough to secure the championship title for Simon Armer in March 703.

Former GT racer Ed Morris was unstoppable in the Classic F3/Classic FF2000 races despite a light shower of rain as the slick-shod field lined up on Saturday. Morris kept Sean Walker’s March 783 pointing the right way and edged away as Benn Simms made best of the slippery track to push his FF2000 Reynard up to second. Team mates David Thorburn and Frazer Gray were the next F3 cars home. Morris did it again on Sunday as Steve Maxted, up from the back of Saturday’s grid in his Ralt RT3, edged Thorburn for second and Simms again topped the FF2000s. From the URS Classic FF2000 ranks, Ben Stiles did more than enough to seal the crown. 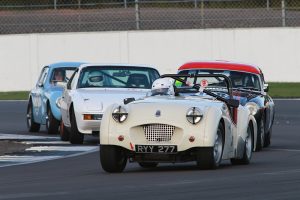 Kevin Kivlochan signed off his Road Sports season in typical style with two resounding wins. Against a superb 70s Road Sports field, his Morgan Plus 8 was narrowly ahead when the safety car was deployed. Unfortunately a tardy backmarker was between Kivlochan and the chasing pack when the race went green and Kivlochan instantly took a massive lead as Dave Karaskas (TVR), Nic Strong (Marcos) and John Williams (Porsche 911) had to wait much longer to get to the green flag.

Later, Kivlochan switched to his AC Cobra to head the Historic Road Sports field for a 13th time as the Morgan Plus 8s of Robin Pearce and Richard Plant battled for second. The returning John Davison should have given Kivlochan a challenge but his Lotus Elan suffered a failed hub bearing on the warming-up lap.

Irish Formula Ford ace Jake Byrne (Reynard SF79) came, saw and conquered in two wonderful Historic Formula Ford 2000 races, winning in style on Saturday, despite a tardy start, from a mighty contest among the leading pack. While the Irish invader set a fierce pace, Benn Simms, Andrew Park, Callum Grant and Ian Pearson had a fabulous ding-dong for second and it was Simms who just beat Park to the line after Grant lost momentum with a half spin at Luffield after an inadvertent near miss with Park. It was another corker on Sunday but the demise of Simms (throttle linkage) and Park with a blown engine left Grant and Pearson chasing Byrne to the flag.

Saturday was a day of mixed fortunes for Formula Junior racer Chris Drake. At the start of the day he won the first front-engined race in his Terrier MkIV against the best efforts of Ray Mallock (U2 Mk2) on his way to clinching the title. Then, a couple of hours later, in his Elva 300, he was out of the rear-engined contest at Becketts on the first lap after he spun and was collected by the unsighted Richard Ferris (Donford). Drake then bagged another front-engined win on Sunday.

A mid-race safety car when the Callum Grant/Ian Pearson Marcos shed a wheel affected the Guards Trophy and the TVR Griffith of Mike Gardiner and BTCC racer Josh Cook paid a heavy price for an early stop. Charles Allison (Chevron B8) had a few seconds in hand over Andrew and Michael Hibberd (Lotus 23B) at the flag, but a 30s penalty for pit-lane speeding dropped Allison to fourth and handed Andrew Hibberd with his third win of the day. 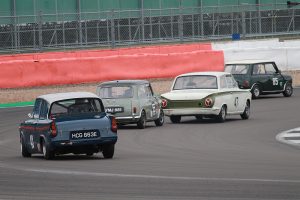 Richard Belcher took a double in Historic Touring Cars in the face of a valiant challenge from series newcomer Jack Moody. Roger Stanford gave mighty chase in his Lotus Cortina and took third to David Hall in the opening race after Moody had a ride through the Luffield gravel. Moody took second to Belcher on Sunday and the class results left Stanford and Bob Bullen (Ford Anglia) as joint champions.

In Classic Clubmans, Mark Charteris was peerless despite the return to the grid of John Harrison in his 50th season of racing. Harrison chased hard in the first race but was then sidelined when two other cars got mixed up at Becketts. With his car repaired, Harrison chased Charteris home later in the day as Barry Webb sealed his 19th title from the Formula Ford-engined Class B ranks.