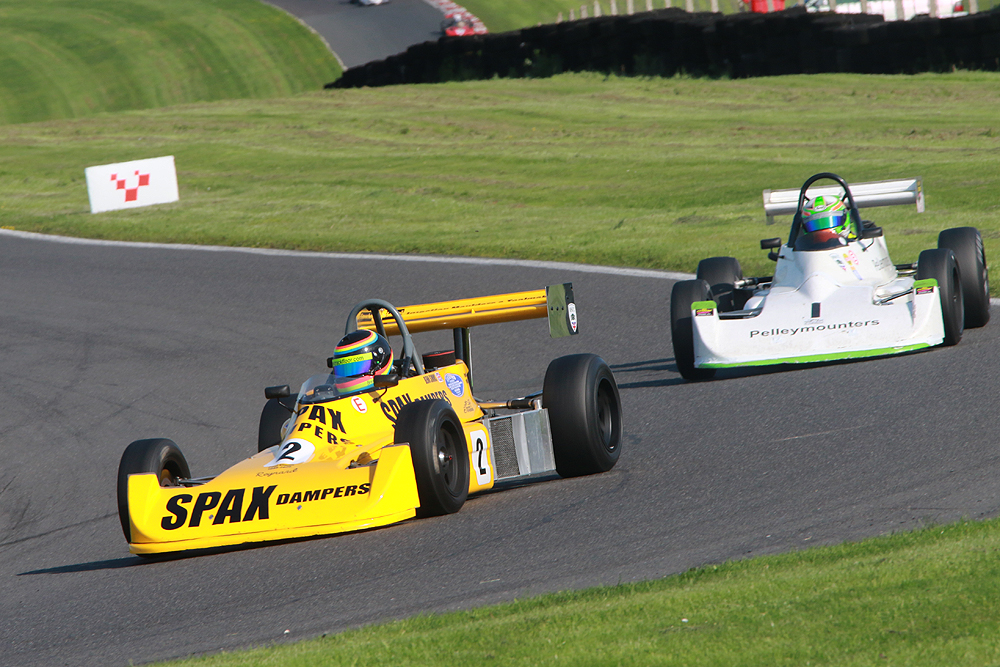 With spectators welcomed back into the venue in good numbers and a full programme of 20 races, it was a great weekend of racing at the three-dimensional Lincolnshire venue.

Headlining the programme were four races for the Historic Formula Ford 2000 Championship, with a heat needed each day to accommodate a tremendous 36-car entry. Back in the pack was former multiple champion Andrew Park in his first race since blowing an engine at Silverstone in October 2019.

In the opening championship race Park spent most of the race chasing Benn Simms and it was a fabulous contest as they went wheel-to-wheel. Simms usually kept a nose ahead until they caught some backmarkers on the exit of Charlie’s on the last lap.

Simms was held up and Park seized his chance to squeeze ahead on the run to Park Corner and get to the line three-quarters of a second ahead to score a fabulous win. Simms, however, had done all the hard work only to lose out on the last lap.

Graham Fennymore went after them, but lost time with a very grassy spin on the exit of Park, which allowed Paul Allen to come up into contention. Fennymore battled back ahead but Allen chased to the line in his first race in the ex-Ian Briggs/Callum Grant Delta T78.

Earlier, young Ben Glasswell dominated the qualification race to ensure a place alongside the top 10 fastest qualifiers for the championship race. Sunday’s qualification race fell to category veteran Adrian Reynard, while the later championship race went to Simms by a comfortable margin over Park and Fennymore as Murray Shepherd took fourth from the URS Classic FF2000 ranks. 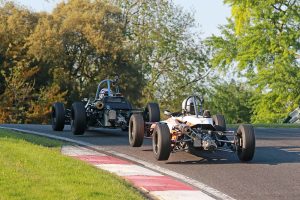 Cam Jackson made it six wins from six races in Historic Formula Ford, but seldom has he had to work harder than he did on Saturday afternoon when teenager Samuel Harrison really took the fight to the reigning champion.

Harrison kept his Elden on the gearbox of the Winkelmann for lap after lap and even had several bold attempts at passing the pacesetter. However, Jackson used all of his experience to repel the impressive contender, and only in the final laps did anything of a gap appear.

A big battle for third included Danny Stanzl, Horatio Fitz-Simon, Matt Wrigley and Brian Morris. However, a couple of skirmishes later in the race broke them up and it was Wrigley who came through to grab a podium finish.

On Sunday, Jackson had it to himself from the fourth lap onwards after Harrison ran wide at Charlie’s and damaged the Elden’s radiator when trying to attack Jackson. Despite the non-finish, Harrison had been hugely impressive. “I think he was quicker than me to be honest,” said Jackson. “He was racing hard and fair and we must have been side-by-side about 12 times in total.” Stanzl raced hard at one of his favourite tracks to round out the podium from Wrigley as Ross Drybrough took a strong fifth to head the over 50s division.

Kevin Kivlochan eventually romped home for 70s Road Sports victory in his Morgan Plus 8 but in the early stages it looked as though Will Plant was going to add a third win to his 2021 tally. Though Kivlochan squeezed ahead of the start, Plant boldly attacked his teammate and friend and found a way ahead on the second lap.

But his glory was short-lived as the Plant Morgan headed into retirement with an electrical issue and left Kivlochan with a diminishing margin over the hard charging Lotus Europa of Howard Payne. Bouncing back from engine woes at Snetterton, Payne had a fantastic race to keep ahead of the TVR pack of Julian Barter, Dave Karaskas and Antony Ross. 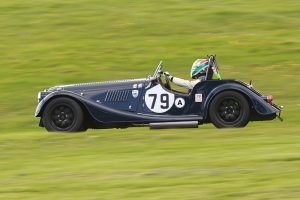 It was all change on Sunday when Plant started from the tail of the grid and Payne posted an early retirement with a major fuel issue. The flying Barter put his TVR ahead while Plant charged up the order to take second from Kivlochan. Best of the concurrent 80s Production Cars was the Ferrari Mondial of Nick Taylor although Jason Wood chased hard in his Vauxhall Nova.

Later on Saturday afternoon Kivlochan doubled up in the opening Historic Road Sports counter with a consummate win in his mighty AC Cobra from regular rival John Davison (Lotus Elan) and Peter Garland in his Morgan Plus 8. Behind them, some mighty Lotus Elan battling kept the crowd entertained. Sunday’s second race was pretty much a repeat as fine field of 24 varied cars completed the second 20-minute contest.

The two Formula Junior grids provided clear double wins for Peter De La Roche (front-engined) and Adrian Russell in the rear-engined division. On Saturday De La Roche, on his seasonal debut, had to find a way around early leader Chris Drake. But as Drake’s Terrier picked up a misfire, De La Roche was away and gone. Stuart Roach led the chase of the leading pair in his Alexis but was a late retirement with a transmission problem.

On Sunday, the Terrier went out mid-race and De La Roche won by nearly a minute from Ray Mallock (U2 Mk2) in the front-engined counter. Russell twice stormed away from the rear-engined pack to win at a canter from Nic Carlton-Smith in the opener and the increasingly rapid Tim Child on Sunday.

The classic Formula Ford opener offered Cam Jackson his first win of the weekend, as his Winkelmann outpaced the rest of the field which included Samuel Harrison, Jordan Harrison, and Rick Morris. Jordan Harrison later retired with suspension woes, allowing Morris to complete the podium.

On Sunday it was much closer as Samuel Harrison matched Jackson wheel-for-wheel and was just a quarter of a second behind after 20 minutes of flat out racing. Morris again took the final podium step while best of the concurrent Heritage FF1600 runners was the rare Lanan of Simon Jackson after a long battle with Tom Roark (Van Diemen). 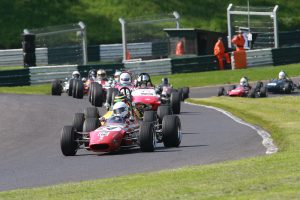 The Historic Formula 3 season started a little later than planned as a strong field of cars contested the annual Justin Haler Memorial Trophy. Benn Simms set the early pace in the Chevron B17 of Jim Blockley, which is now for sale and Simms was giving it a run to show his pedigree. Sure enough, he edged clear as Jeremy Timms chased hard in his B15. It was all building to a close finish when Timms got crossed up going through the Gooseneck and spun backwards into the tyre wall, albeit not too heavily. With his rival gone, Simms was well clear for a commanding win as up to second came Jason Timms in his Brabham BT21 to take the place vacated by his cousin.

With Jeremy Timms unable to start the second race, Simms was able to pull a minute gap over Jason T and Michael Scott to secure his third win of the weekend. Two races for the Classic Clubmans Championship wrapped up the meeting with a resounding double win for Mark Charteris and Formula Ford-engined class wins for Tom Eustace and Steve Littler.