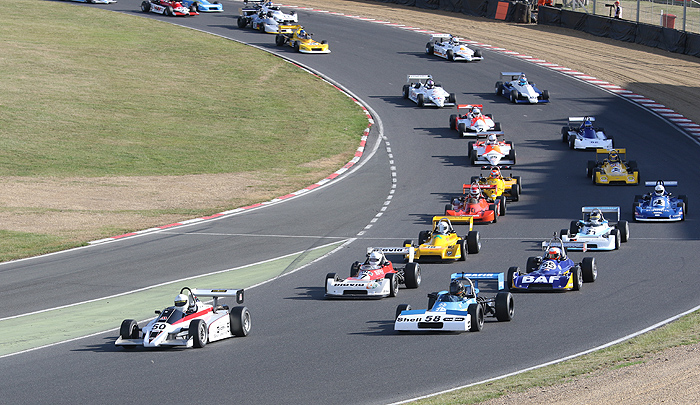 A mighty 24-race line-up across three full days of action will make the ‘Legends of Brands Hatch Super Prix’ (1-3 July) a highlight event in the 50th anniversary season of the Historic Sports Car Club. The club has an ambitious, but attainable, target of 500 entries for the event.

Building on the event that has headlined the HSCC year for over a quarter of a century, the ‘Legends’ programme is topped by races for the HSCC Historic Formula 2 FIA International Series, the HSCC Super Touring Car Trophy and the Pre ’80 Endurance Series, which is home to cars of the type raced in the World Endurance Championship through the 1970s.

The Formula 2 and Super Touring cars will each race twice, once on Saturday and once on Sunday, while the Pre ’80 cars have a 50-minute race on Saturday. Top quality guest races joining the HSCC programme are the GT and Sports Car Cup with a 50-minute race on Saturday and the Historic Grand Prix Cars Association with two races for pre-1966 Grand Prix cars. The sight of front and rear-engined Grand Prix cars in action on a track that has changed very little since these cars raced at Brands Hatch in period will be another highlight of the event.

Thunderous Formula 5000s and nimble Formula 2 and Formula Atlantic cars will contest a double-header for the Derek Bell Trophy as drivers compete for the ‘Historic Race of Champions’ in honour of one of the most famous races in the Brands Hatch story. Meanwhile, bringing the curtain down on Saturday’s racing will be a bumper grid for the 40-minute Guards Trophy race for sports and GT cars of the 1960s.

“We’ve got a fabulous 24 race line-up for Brands Hatch, probably one of the best in the event’s 26-year history,” said HSCC Chief Executive Officer Grahame White. “We are extremely grateful to Jonathan Palmer and the team at MSV for giving us the chance to grow the event to three days in celebration of our 50th year.”