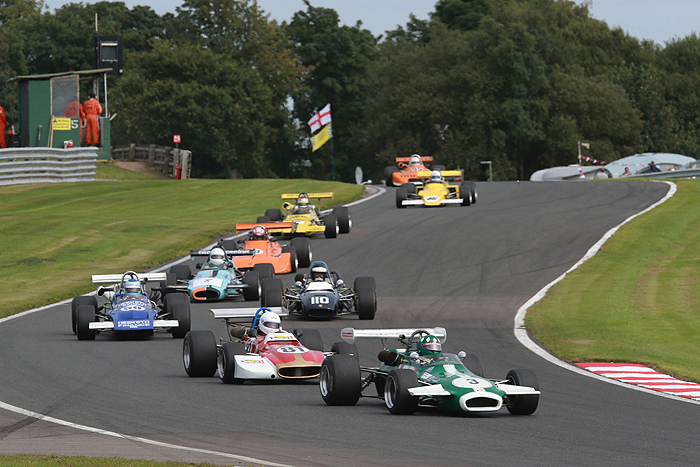 Darwin Smith stormed back into the HSCC Historic Formula 2 FIA-sanctioned International Series to score a brace of wins during the Oulton Park Gold Cup (26-28 August).

In a tremendous weekend for Historic F2, Smith and Richard Evans were the class of the field as the cars raced at one of Britain’s most scenic and rewarding tracks for the first time in nearly a decade. The last period F2 race at Oulton Park was in 1972 when Ronnie Peterson headed Niki Lauda and James Hunt.

With a fabulous 25-car field and a strong European contingent on the grid, the sight and sound of the F2 cars thrilled a big Bank Holiday crowd as warm sunshine bathed the event. The visiting drivers loved the three-dimensional challenge of Oulton Park and current champion Robert Simac professed it to be his new favourite race track. Meanwhile, US racer James King was back at the track for the first time since 1976.

Off-track, a wonderful friendly atmosphere pervaded the paddock area and a barbecue on Saturday evening was a highlight of a very social weekend for the teams and drivers.

The 25-car entry was headed by Smith’s March 722 in qualifying as he put down a marker for his return to racing after nearly a year away due to business and family commitments. Smith had clearly lost none of his pace and had a fair margin in qualifying over Evans (March 742), Mark Dwyer (March 742) and Dan Gibson (Chevron B42). Heading the classes were James King (March 712), Marc Mercer (March 73B) and Stephen Weller (Elfin 600B). 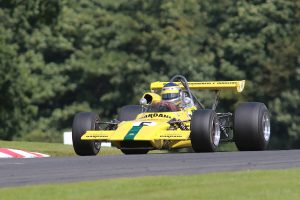 Despite a couple of qualifying issues, a superb grid of cars lined up for Sunday’s opening race. Welcome additions included the Tecnos of Julian Stokes and Dan Pyett, the rare Crossle 22F of John Murphy and Marc Mercer in the March 73B usually raced by his father David. Several of them were keen to sample Historic F2 with a view to doing more races in 2018.

As expected after qualifying, Smith set a scorching pace and edged clear at the front as Evans have valiant chase. In their wake, great battles raged all down the field although Dwyer was sidelined by gear selection issues and Gibson retired with engine problems.

Chris Lillingston-Price (Chevron B42) came through strongly to complete the overall podium after a battle with the B27 of Mike Bletsoe-Brown and King won the 1600cc F2 class after a close contest with Formula Atlantic class winner Mercer and Simac (March 712). In a race with battles all the way down the order, Steve Seaman (Ralt RT1), Pyett and Paul Bason (March 712) rounded out the top 10.

The result of Monday’s second race was similar but this time Evans ran Smith closer and there was less than two seconds it in after two top class drivers had pushed to the limit for 20 flat-out minutes. Bletsoe-Brown got a rocket start to lead into the first corner but was soon edged back to third for a fine battle with Lillingston-Price and the verdict finally went to the Chevron B42 racer. 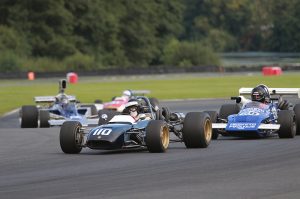 King again won the 1600cc F2 class but Simac was closer as he found more and more speed while Murphy won the Formula Atlantic class with a great eighth overall on his home track. Stokes and Pyett had a mighty Tecno battle for ninth and Stokes got the place by less than half a second.

However, it was the Historic Formula 2 FIA-sanctioned International Series that was the biggest winner of the weekend as a fine grid of superb cars delivered great racing in a truly friendly and sporting atmosphere. Special awards went to overall aggregate winner Smith, who took the Gold Cup title, and top 1600cc racer James King.