Silverstone GP next for HSCC 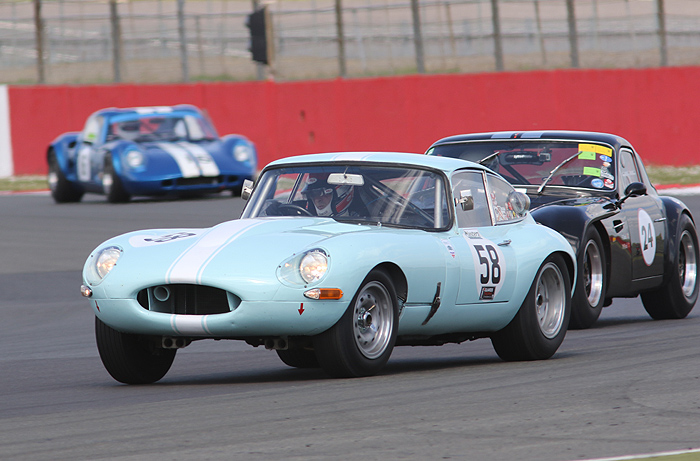 A mighty entry of over 430 cars for the Silverstone Grand Prix circuit will make this weekend’s International Trophy (21/22 May) another highlight of the Historic Sports Car Club’s 50th anniversary season.

The weekend gives HSCC racers the chance to tackle the fast sweeps of the Grand Prix circuit and the response to the event has been superb, with more than 430 entries across 12 grids and 14 races. As part of the club’s 50th anniversary year, Geoff Thomas will be the guest of honour for the weekend and will present some of the awards. Geoff was on the grid for the inaugural Griffith Formula race at Castle Combe in 1966 in a Porsche 356 and later raced a Formula 5000 Lola T300 in the Derek Bell Trophy.

The 2016 Derek Bell Trophy season starts with a double-header and on the fast sweeps of Silverstone GP the mighty Formula 5000s should hold sway. Likely to set the pace is Neil Glover in the ex-Peter Gethin Chevron B37, along with Greg Thornton in his Surtees TS11, Mark Dwyer (Lola T332) and Daryl Taylor (Chevron B28).

The fastest of the smaller-engined cars will be snapping at the heels of the F5000s, notably Andrew Smith in his Formula Atlantic March 79B. Dean Forward (Formula 2 March 782) will be close to Smith despite limited experience in these cars. The Classic Formula 3 cars share the DBT grid with Richard Trott (Chevron B43) as the man to beat.

One of the highlights of the weekend will be the second round of the Jaguar Classic Challenge, which will pit nearly 40 cars into a 40-minute race on Saturday afternoon. Julian Thomas/Calum Lockie won the season opener at Donington Park and battle will be renewed this weekend, with the very quick E-type for Martin O’Connell/Sandy Watson among the major contenders.

Thomas and Lockie will also challenge for top honours in the hour-long GT and Sports Car Cup race on Sunday morning which has a magnificent field of more than 50 cars. Thirteen Jaguar E-types and three AC Cobras will surely set the pace, and heading the field are Grahame and Oli Bryant who won at Donington Park three weeks ago in their AC Cobra.

As at Donington, the big rival to the Bryant Cobra will be the similar car of Leo Voyazides but this weekend Leo is without Simon Hadfield as his co-driver. Simon is away in the US at his daughter’s wedding, so the Voyazides Cobra will be shared by the very rapid and very consistent Andy Wolfe.

Voyazides and Wolfe will also challenge for the Pre ’80 Endurance race, which has another excellent and varied field. Their DFV-powered Lola T282 will take on the similarly-powered T296 of Donington winner Michele Liguori.

Another 50-plus grid will make a superb spectacle in the Guards Trophy and nine Chevrons from the B6 and B8 range will take centre stage. Michael Schryver started the 2016 season with another win at Castle Combe, sharing with Simon Hadfield, but this time it is Michael’s son Will sharing the driving duties.

Ranged against the Schryver Chevron is the B8 of Sandy Watson/Martin O’Connell, winner of this race a year ago, and the similar cars of Charles Allison, Greg Thornton and David Smithies/Chris Clarkson. Capable of matching the best of the Chevrons is the Lenham Spider of George Tizzard, while his father Stuart has also entered his newly-acquired Lotus 23B.

An amazing 50-car entry for round two of the Historic Formula Ford 1600 Championship will form one of the biggest grids in the 49-year history of the category. Victory in the first of the Castle Combe races has put former F3000 racer Mark Shaw into the early points’ lead and his Merlyn Mk20 will be very strong.

Bringing the first day to a close will be round two of the Historic Road Sports Championship, for production cars from the 1960s. At the head of the action will be the mighty Morgan Plus 8s with reigning champion Kevin Kivlochan facing a big battle from Richard Plant and Tim Pearce. However, in the opening race at Castle Combe it was Peter Shaw who toppled the Morgans in his Lotus Elan.

Like many of the HSCC classes, the HSCC 70s Road Sports Championship season opened at the 50th anniversary meeting at Castle Combe in mid-April and it was former champion Julian Barter who took overall victory in the Lotus Elan of Ian Daniels. However, this weekend, the Dorchester racer is back at the wheel of his own TVR 3000M, the car that took him to the 2009 crown.

The HSCC’s Historic Formula 3 Championship brings out a good field of the 1-litre cars from a golden era of Formula 3 racing. This is round two of the 2016 championship which kicked off at Castle Combe and it was Peter Thompson (Brabham BT21) who took a clear win as Andrew Hibberd (Brabham BT18) retired with fuel issues.

Always a crowd favourite is the ByBox Historic Touring Car Championship, which has its second round of the season on Sunday afternoon. Heading the V8 brigade is New Zealander Warren Briggs in his potent Ford Mustang, winner of the opening race at Castle Combe. Lining up against Briggs in the V8 ranks will be the very rapid Fold Falcon of Leo Voyazides who will be contesting his fourth race of the day.

The historic element promises a mighty contest between two of the category’s most successful drivers, Benn Simms (2014 champion) and Nelson Rowe (2012 and 2013 champion). However, when the season started last month it was Cumbrian Andrew Park who turned in a feisty performance to win in his Reynard SF81. Ranged against the leading trio of historic cars will be classic pacesetter Ian Pearson who has consistently set the mark with his Van Diemen RF83.