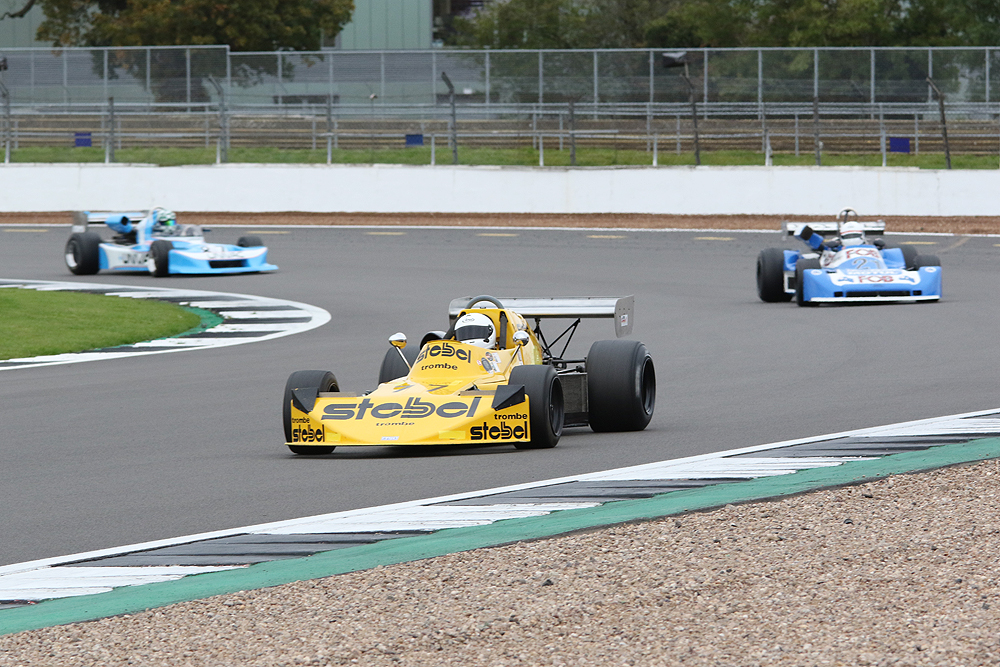 The racing was excellent, the grids were large and even the weather was kind as the Historic Sports Car Club concluded its 2020 championship schedule at its Finals Meeting on the Silverstone National Circuit over the weekend (October 17/18).

Nearly 270 entries including a spectacular headlining Historic Formula 2 grid delivered some superb racing as a number of 2020 champions were crowned during a fine weekend of historic racing. Details of the 2020 champions will be released later this week.

Andrew Smith (March 742) was in mighty form at the head of the 26-car Formula 2 field and stormed to a pair of non-championship wins. Smith was able to break clear in the opening laps while Matt Wrigley (March 782) twice led the chase as Rob Wheldon (March 762), Matthew Watts (Martini MK19/22) and Mark Dwyer (March 742) disputed the next places. Callum Grant was superb in his March 79B to head the Formula Atlantic cars, while Cam Jackson (March 712) and Chris Lillingston-Price (Tecno T70) shared wins in the 1600cc Formula 2 class.

More than 40 cars in the Historic Formula Ford 2000 had to be split across two grids but that made little difference to Benn Simms (Reynard SF79) who swept to an impressive double. Even a safety car in the first race that negated his early lead didn’t unseat the former champion. Callum Grant (Delta T81) chased Simms home in the first race but was side-lined on Sunday by a transmission failure.

After six years out of racing, Graham Fennymore made a stunning return in his Reynard SF81. He started the first championship race from 30th on the grid and raced to a remarkable fourth behind Ian Pearson (Royale RP30) and then moved up to second overall on Sunday, just ahead of Pearson.

To back up his F2 victories, Andrew Smith set the pace in Classic Formula 3/Classic Formula Ford 2000 races but was denied victory on Saturday when the gearbox output shaft failed. Instead category newcomer Conor Murphy took a debut victory in the ex-Mike White March 803B of Vic Nutter from Benn Tilley (March 743). Smith bounced back to win on Sunday as Tony Hancock (Lola T670) edged Tilley back to third. Young Murray Shepherd (in Hancock’s Van Diemen RF82) twice topped the FF2000 division but had to push hard in both races. 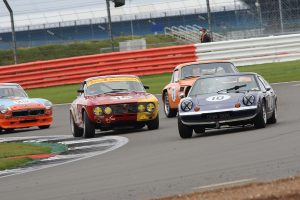 Kevin Kivlochan was the class of the 70s Road Sports field in his Morgan Plus 8, capitalising on the open spaces of Silverstone to stretch clear as Dave Karaskas battled up to second in his TVR 3000M. Karaskas wriggled clear of some great dicing as Nic Strong (Marcos 3000GT), Jeremy Clark (Lotus Elan) and John Williams (Porsche 911SC) packed out the next places.

On Sunday, Kivlochan switched to his AC Cobra to complete a weekend double by winning the Historic Road Sports race. However, this was never an easy win as the Morgan pack gave valiant chase, notably Richard Plant who finished just 2.5s behind the Cobra after 25 minutes of racing. Robin Pearce rounded out the overall podium in his Morgan Plus 8.

The Classic Clubmans category had two races on Sunday and it was F2 racer John Harrison (Mallock Mk21) who took a resounding double after fellow F2 racer Mark Charteris had his weekend go from bad to worse by retiring his Mallock Mk20/21 in the opening race with a minor electrical problem. Anthony Denham (Phantom P80) and Adrian Holey (Mallock Mk20B) completed the podiums as Dave Facer (Mallock Mk16) and Tom Eustace (Mallock Mk18) shared the Class B wins.

The Historic Formula Junior season wrapped up with four races and double wins for Ray Mallock (U2 Mk2) and Cam Jackson (Brabham BT2). Keith Pickering (Britannia) ran second to Mallock in the opening race from an entertaining early battle but on Sunday Michael Hibberd (Lola Mk2) led the chase of Mallock after resolving an oil leak that forced the Lola into retirement on Saturday. Michael’s son Andrew finished second to Jackson in both races for the faster classes in his Lotus 22.

At the wheel of the Ginetta G16 of George Douglas, Luke Stevens was mighty in the 40-minute Guards Trophy race and won by over seven seconds from the Chevron B6 of Andy Newall. At the flag, Newall had just a quarter of a second advantage over the Ginetta G16 of Graeme and James Dodd. In the GT division, the ‘Shapecraft’ Lotus Elan of Will Schryver/Marcus Weller headed home the Elan 26R of Mark Martin. 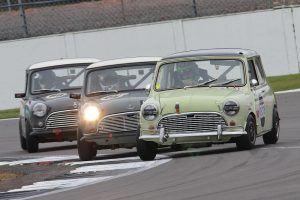 An excellent field of Historic Touring Cars delivered two hugely enjoyable races and two winners. Dan Williamson (Ford Falcon) won well in Saturday’s opening race despite a dogged pursuit from the Lotus Cortina of Richard Dutton. The Falcon had developed an oil issue and didn’t start the second race, so Dutton was able to win from the similar car of his mate Neil Brown. Further back, the Mini pack produced some glorious dicing as Nick Paddy and Dan Wheeler shared the wins. Wheeler retired from the first race when his Mini lost a wheel at Becketts but was back on top later in the day.