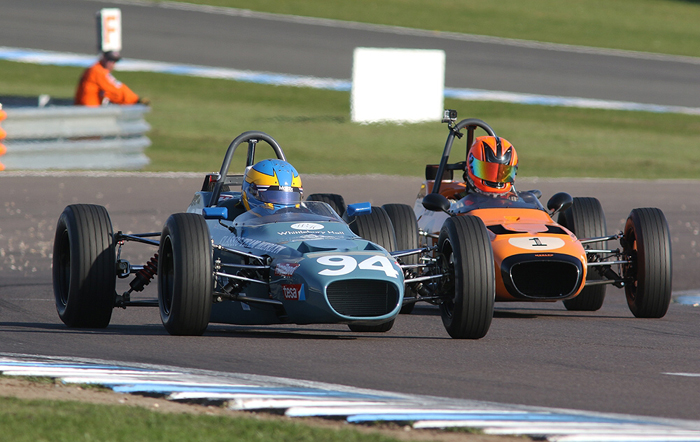 * Special award for over 50-year-old drivers

The celebrations for 50 years of Formula Ford are gathering pace as the Historic Sports Car Club’s Historic Formula Ford 1600 Championship heads for round two at Silverstone on 20 May.

After a stunning opening meeting of the season at Donington, which featured 55 cars and a championship race won by 57-thousandths of a second, the stage is set for another thriller in round two. An entry of more than 60 cars will be in action on the Silverstone Grand Prix circuit on Saturday 20 May.

The next major date in the year-long celebrations is the Legends of Brands Hatch Superprix meeting (1/2 July). Four races will be run over the weekend to accommodate all the Formula Ford entries and a special function will be held on Saturday evening for up to 150 racers, guests and other people from the Formula Ford story. The HSCC Club office is in the process of contacting as many former champions as possible to invite them to the weekend.

Originally floating outside the three-mile limit off the Essex coast, Radio Caroline has been the launch platform for many pop stars and is now broadcasting globally and still afloat on the Thames. Another welcome supporter for the championship is Titan Historic Racing.

At the end of July Historic Formula Ford will be feature races at the Silverstone Classic (28-30 July) to mark the 50th anniversary of the category. The 54-car grid is already significantly over-subscribed and priority for grid places will be given to regular championship contenders. 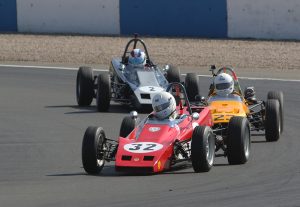 Mansell says that demand for places on the grid has reached unprecedented levels. “We have up to 10 newcomers to the championship this season and a total pool of around 140 drivers, either with a car or with access to a car. There are well over 100 race ready cars in the UK.”

In 2017, the Historic Formula Ford Championship will be supporting the Prostate Cancer UK charity. The competing cars will all be carrying the charity’s stickers in a bid to raise awareness and funds for this important charity. More details are at www.prostatecanceruk.org

Finally, in recognition of the large number of older drivers racing in Historic Formula Ford, a special award within the championship will be the ‘over 50’ class. Points are scored by all qualifying drivers based on the number of fellow ‘over 50s’ they finish ahead of in each race.

Grahame White, CEO of the HSCC, said: “This is a very special year for Formula Ford and the response to our championship has been remarkable. It is a very fitting way to mark 50 years of one of the world’s favourite racing categories.”