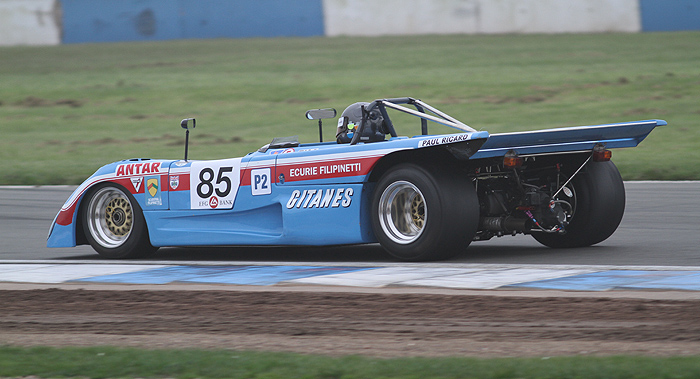 Two significant additions to the field will make their debut in the HSCC’s Martini Trophy when the 2014 season opens at the Donington Historic Festival (3-5 May). Mark Richardson’s Lola T290 and Kevin Cooke’s Royale RP17 will both be on the Martini grid for the high-profile event.

Richardson has acquired the ex-Jo Bonnier Ecurie Filipinetti 1972 Lola T290 from Neil Primrose and had his first run in it at a recent Donington Park test day.

“It’s fabulous to drive: I’m very pleased with it. I love cars from this era and it was ready to go when I got it,” said Richardson. He has kept his Sports 2000 Lola T492 and still plans to race that car as well.

After 18 months of work, fellow Sports 2000 convert Cooke is ready to give his Cosworth BDG-powered Royale RP17 its debut races at the Donington Historic Festival.

Cooke bought a Royale RP6 chassis from Peter St Barbe and has painstakingly rebuilt it into RP17 specification as used by Hans Baumhardt in 1972.

The two models share the same chassis and Cooke has used dimensions from the Baumhardt chassis, now in the US, to complete his car. “There were only five RP17s built in period and I’ve spent 18 months collecting information,” said Cooke, who also drew on drawings held by former Royale boss Alan Cornock.

The Martini Trophy for 2-litre sports-racing cars of the 1970s has grown well over its first three seasons as Chevrons, Lolas, Marches and others re-create the European 2-litre Sports Car Championship. With the addition of a class for Sports 2000s from the same era, the series is gaining support all the time as more and more of these fabulous cars are prepared for action.

The 2014 season opens with a double-header on the programme for the prestigious Donington Historic Festival, which will mark the first Martini Trophy races at the ever-popular East Midlands track.