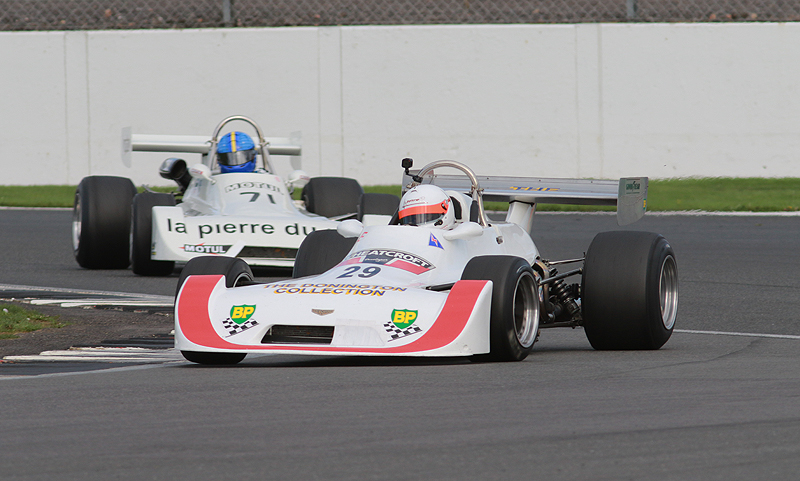 Interest in the HSCC Historic Formula 2 FIA-sanctioned International Series is booming with a number of fresh cars and drivers due to join the grid this season.

The season will start at Hockenheim on 21/22 April when the Formula 2 races will play a prominent part in celebrating the life of Jim Clark, who died at the German track 50 years ago on 7 April 1968. The weekend will include a number of special events to commemorate the double World Champion who is widely regarded as one of the greatest drivers in the history of the sport.

With many existing competitors planning to return to Historic Formula 2, they will be joined by a gaggle of new faces as various rebuild and restoration projects come to fruition.

Daniel Clayfield has completed his first test runs in his March 722, now superbly finished in period Elf livery. This is the ex-John Calvert car that was a top ten runner in the Yellow Pages UK Formula Atlantic Championship.

Australian Steve Weller also has a March 722, which is the famous ex-Niki Lauda Formula 2 car and it is hoped that the ex-pat will bring the car to Europe this summer. In the meantime, he will race his Australian-built Elfin 600B. Meanwhile, Historic FF2000 racer Jeremy Caine is making progress getting his ex-Frank Williams/Mike Campbell-Cole March 712 ready to race.

Historic Formula Ford front-runner James Buckton plans to be racing a Lola T240 in Formula Atlantic trim, Ghislain Genecand has a March 76B currently with a 2-litre engine and long-time Formula Junior racer Steve Futter has acquired a Ralt RT1. Meanwhile, Tecno racer Julian Stokes has a Chevron B42 being readied, which was raced when new by US racer John David Briggs, and Classic F3 racer Paul Tonkin will step up to the F2 series with the ex-Richard Morgan/Wheatcroft Racing Chevron B29.

Aiming to join the grid later in the season is Hansueli Christen from Switzerland with the ex-Pescarolo/Frank Williams Racing Politoys March 712. The car is complete and is currently being prepared to race ahead of a full programme in 2019. When ready, his car will join the Jeremy Caine car to make two Frank Williams Racing cars on the grid.

Another car coming from Australia is the March 76B of Peter Brennan, a respected member of the Australian racing fraternity. The March is liveried as it raced with success in the USA and Peter brings experience of racing period Formula 1 and Formula 5000s.

The crop of newcomers will build on a very successful 2017 season, when 45 cars raced in the series. The 2018 series will cover 10 races at five race meetings, taking in some of Europe’s finest tracks, and includes the Grand Prix tracks at Silverstone and Brands Hatch as well as the hugely popular Zandvoort Historic Grand Prix and the Dijon Motors Cup in October.

Historic F2 co-ordinator Roger Bevan said: “I’m very excited about the prospect of these important cars joining our grids. It seems almost daily that I learn of new drivers and fresh cars being prepared to race in HSCC Historic Formula 2. We have an excellent 2018 calendar of races at some of the best Grand Prix circuits in the UK and Europe. I look forward welcoming the new cars and drivers in the coming season.”