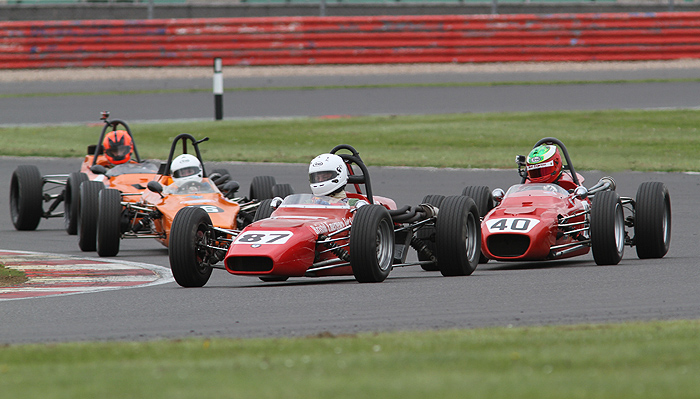 Over 400 competitors took to the full GP circuit across two days and there were stand out victories for Jon Milicevic (Formula Junior), Nelson Rowe (Formula Ford) and Mike Whitaker (Guards Trophy). Jeremy Smith made history by giving the six-wheeled March 2-4-0 its first race win in the Derek Bell Trophy and a fabulous 25-car field for the Martini Trophy made a glorious spectacle as James Dodd took a brace of wins in his Chevron B31.

Sunday’s Formula Junior race delivered another instalment in the on-going battle between Milicevic and Sam Wilson and they went wheel-to-wheel in their Coopers in another sporting contest of the highest order. Good friends off the track, the duo raced impeccably and Milicevic had to work very hard to win by four-tenths of a second.

It was even closer in Historic FF1600 as Rowe had to contend with flying teenagers Sam Mitchell and Callum Grant and another mighty battle ensued as Grant marked his 18th birthday in style. Each took a turn to lead the race, but Rowe managed to work ahead when it really mattered after a fine race.

Dodd overcame the challenge of Doug Hart (March 75S) in the Martini Trophy races, while Kevin Wilkins also starred in his ex-Guy Edwards Lola T296. He went from the back in race one after the throttle cable broke before qualifying, but was up to second by the end of Sunday’s race. On hand to present the awards was one of the car’s former drivers, Chris Craft.

Derek Bell Trophies were shared by Smith in the remarkable March and Michael Lyons, who took over his father Frank’s Lola T400 for the second race. An engine problem in qualifying cost Michael the chance to race the McLaren M26 used by James Hunt to win the 1977 British Grand Prix at Silverstone.

An absorbing cat-and-mouse battle in the Guards Trophy GT race netted victory for Whitaker’s TVR Griffith over the Lotus Elan of Nick Fleming, while Martin O’Connell won the sports-racing section in Sandy Watson’s Chevron B8. In total, 78 cars started the pair of Guards Trophy races.

Nearly 70 road sports cars were in action with wins going to Roger Waite’s Lotus Elan (Historic Road Sports) and Richard Plant’s Morgan +8 (70s Road Sports) in a dash to the line against the TVR 3000M of Julian Barter. In the hour-long GT and Sports Car Cup race, there was another victory for the AC Cobra of Leo Voyazides and Simon Hadfield.

During the weekend, Aford Awards of Maidstone presented two ‘driver of the day’ awards. Saturday’s award went to young Sam Mitchell after a superb Historic FF1600 drive, while on Sunday the winner was Andrew Hibberd. He spun on the opening lap of the Formula Junior race and re-started so far back he was overtaken by the rescue vehicle. Hibberd fought back through the 36-car field to finish fifth.