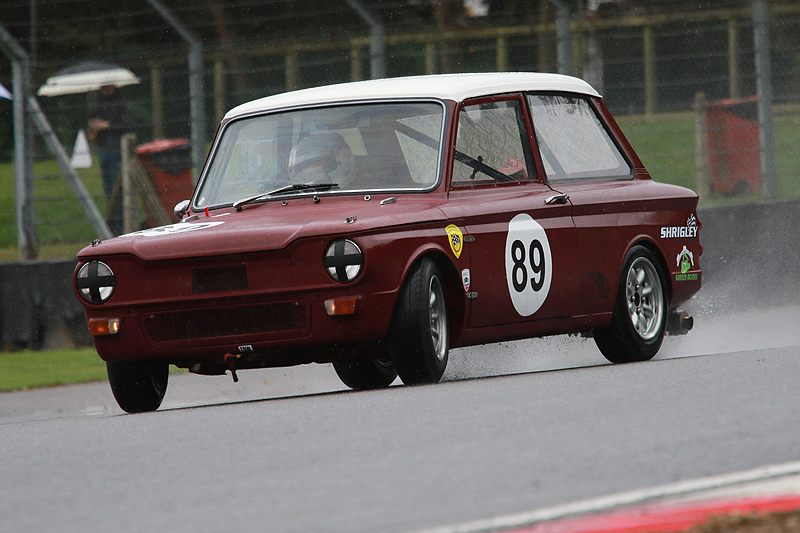 A brace of Hillman Imp wins for Adrian Oliver and Steve Platts were highlights of a wet weekend at Brands Hatch (22/23 September), as the Historic Sports Car Club’s event also honoured 50 years of the Ford Escort.

Both Historic Touring Car races ran on Saturday in wet and greasy conditions. The opening race was all about title contender Adrian Oliver who was superb in the conditions and led from front, sliding the Imp around in impressive drifts.

Oliver got out in front and stayed there, although later on Mike Gardiner was getting closer in his Lotus Cortina. Meanwhile Platts, in his Singer Chamois-based car, finished back in third, a couple of seconds clear of Richard Belcher.

Later on Saturday, conditions were pretty similar but this time it was Platts who set the pace once the Imps had dealt with Gardiner’s Cortina. Oliver had a big slide on the first lap, but worked back to second and chased Platts to the flag.

The Classic Formula 3 and URS Classic FF2000 fields shared a double-header with a race each day and a memorable victory in Saturday’s rain for FF2000 racer Chris Lord. In better conditions on Sunday, Paul Smith narrowly beat Gaius Ghinn as the F3 cars set the pace as Lord again topped the FF2000s. 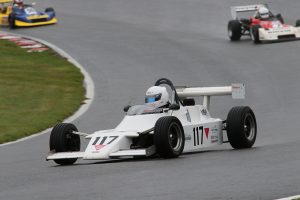 In tough conditions on Saturday, Lord proved the class of the field and worked his FF2000 Van Diemen to the head of the pack before pulling clear for a commanding win. After a poor start, Gaius Ghinn battled ahead of Richard Trott to be the first F3 car home.

In the first Classic Clubmans race, Mark Charteris was behind the fast-starting John Harrison in the early laps but then eased ahead and went clear as Alan Cook completed the podium. Clive Wood was a strong fourth to win Class B while. There was a similar result on Sunday, although Harrison kept Charteris on his toes all the way to the flag.

A double Historic Formula Ford win for Cameron Jackson has given him the advantage in the title contest, particularly after title rival Ben Mitchell slid out of the second race while chasing the leader.

In changing conditions for qualifying, Jackson and Mitchell qualified only fifth and sixth, but Jackson forged his way into the lead within a couple of corners and Mitchell went past Linton Stutely at the start of the second lap to take second place. The lead margin came down until a mid-race safety car bunched the pack up once more, but Jackson stayed ahead.

Callum Grant battled the poor visibility to take third while Stutely was fourth and championship newcomer Clive Richards claimed fifth. On Sunday, Jackson completed a perfect weekend and, as others hit dramas, Richards came through to a tremendous second with Ben Tusting right on his gearbox at the flag.

Paul Allen scored his first Historic FF2000 win in the rain of Saturday as championship leader Andrew Park led initially, but soon found himself struggling on old wet tyres. With better tyres sourced, Park won on Sunday to set himself up to retain his crown.

Allen came through strongly on Saturday to take the lead while the struggling Park dropped back to fourth as Allen now led from Ian Pearson and Jason Redding. Pearson set off after Allen but just pushed too hard into Clearways and spun into the gravel, triggering a safety car period. 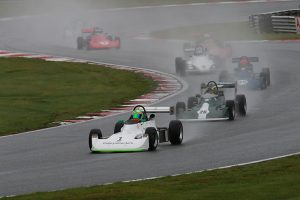 At the re-start, Park briefly dived ahead of Redding to take second but that lasted only as far as Surtees before Park’s Reynard got into a big slide and lost time slithering across the grass and dropped back to third place. Park was in much better shape on Sunday and won by a commanding margin from Allen as Stephen Glasswell ran strongly to take third.

Sunday’s dedicated 50th anniversary Ford Escort races brought out a fine grid of Mk1s and Mk2s. Daniel Brown headed his father Sean and brother Robert in a family one-two-three in qualifying and that was how they finished the opening race. Daniel repeated his win later in the day but this time Steve Minton got his Mk2 running strongly to take second place.

Both Road Sports grids had double headers on Sunday, with one very wet race and one in better conditions later in the day as the rain finally cleared. In the opening Historic Road Sports race Kevin Kivlochan managed to keep his Morgan Plus 8 ahead of the Lotus Elan of John Davison, but later on the roles were reversed as Davison won by less than two seconds to secure the championship.

70s Road Sports racers Will Leverett and Jeremy Clark scooped a win apiece. In the opening race, Leverett got his Lotus Europa to the flag with just a quarter of a second in hand over Clark’s Lotus Elan and with Leverett retiring from the second race Clark had an easier time as he won from  John Williams (Porsche 911SC) and Jim Dean (Europa).