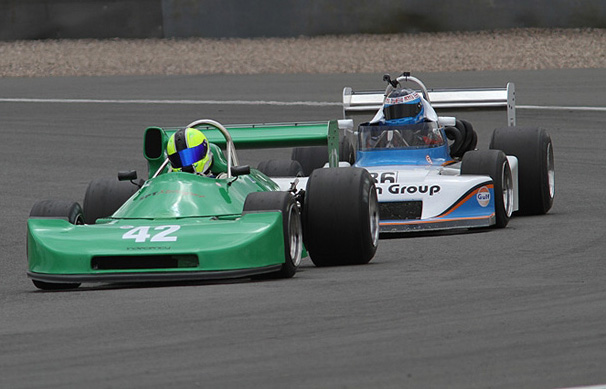 For the second time this season, more than 400 cars will be in action during a race meeting from the Historic Sports Car Club as a fabulous entry gathers for the annual Brands Hatch Historic Super Prix (13/14 July).

Topping the bill are three double-headers for the Historic Formula 2 Championship, Martini Trophy and Super Touring Trophy. All three series have a race each day and will deliver spectacular racing from highly competitive grids.

Historic Formula 2 is riding high these days, with excellent entries, top quality cars and drivers, fabulous competition and a first-rate calendar. Nearly 30 cars will line up at Brands Hatch for rounds five and six of the HSCC-organised 10-race season and with championship leader Andrew Smith absent, the way is open for a new name to move to the top of the table. Richard Evans takes over the March 742 raced by Smith in the opening rounds and will battle with Nick Fleming (Ralt RT1) and Matthew Watts (March 772P).

The Martini Trophy for 2-litre sports-racing cars of the 1970s is getting better and better as Chevrons, Lolas, Marches and others re-create the European 2-litre Sports Car Championship. Fleming is back out, this time in a Chevron B36, and goes up against James Dodd (Chevron B31), Doug Hart (March 75S) and John Burton (Chevron B26).

Fifteen years after he last drove the car, former BTCC champion John Cleland get back behind the wheel of his 1997 Vauxhall Vectra in the pair of races for the new Super Touring Trophy. “In the 15 years since I last drove the car it has become historic,” joked Cleland. “I’m looking forward to racing it: it will be seriously quick around the Grand Prix circuit at Brands. But I’m not expecting to set the world on fire.”

Cleland will join Patrick Watts on the grid as Watts returns to his former Peugeot 406. “I think everybody will say ‘we’re going to take it easy and these are historic cars’, however when the flag drops all that will stop and we’ll be out there to do as well as we can,” said Watts.

Two fine Road Sports entries will pack the grid on Saturday, while more than 25 1-litre F3 cars will be in action in the Historic Formula 3 race. On Sunday, later F3 cars, headed by the ex-Martin Brundle Ralt RT3, will contest the Classic F3 Championship round.

The longest race of the weekend is Saturday’s 40-minute Guards Trophy race, with a capacity 44-car grid plus reserves. A gaggle of Chevron B8s will battle at the front, while prolific racer Fleming will race yet again, this time in his Lotus Elan, and will go up against Jaguar E-types and AC Cobras in the GT category.