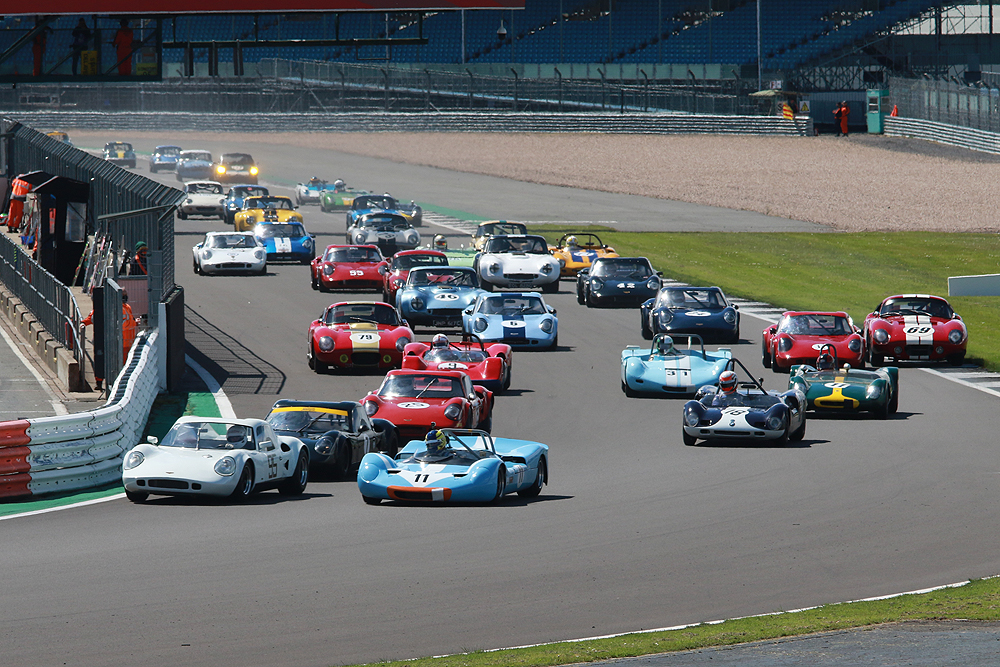 Tremendous grids of spectacular historic racing cars ensured a memorable weekend at the Historic Sports Car Club’s Silverstone International Trophy meeting on the Grand Prix circuit over the weekend (22/23 May).

With bumper grids for most races and spectators admitted to Silverstone for the first time since the end of 2019, it was a very special race meeting.

On Saturday Cam Jackson added yet another Historic FF1600 win with a commanding drive in his Winkelmann. After heading qualifying on a slippery track, he got the jump on the pack in the race and was able to edge decisively clear as a mighty contest raged for second place. Callum Grant worked hard to move up and grab second from Horatio Fitz-Simon and Linton Stutely.

Jackson doubled up in style on Sunday, while those behind him battled furiously. Eventually it came down to a fine dice between Ben Mitchell and Fitz-Simon, and they ran neck and neck all the way to the flag where Mitchell got the verdict by less than a hundredth of a second. 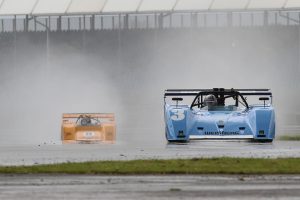 The tremendous Thundersports grid looked and sounded stunning with a fabulous array of sports-racing and GT cars from the 1970s and early 1980s. Calum Lockie on board the mighty March 717 was peerless and shot clear on the opening lap. Lockie’s escape was boosted when Dean Forward had a big moment under braking into Stowe and spun his McLaren M8F. Forward got going again but dropped a lot of places in the process.

Meanwhile, John Burton had started his Chevron B26 from the back of the bumper grid after a late problem with a gear ratio change. A lengthy safety car period while several stricken cars were moved then interrupted the race and allowed the field to bunch up. From the green Lockie again went clear as Forward chased, moving into second when Warren Briggs spun his McLaren M8E at the restart. The battle for the best of the 2-litre cars came down to a close contest between Tony Sinclair (Lola T292) and Burton. The place changed several times before Burton used all his experience to pip his rival.

The second race started with Lockie heading Forward, but within a couple of laps the rain arrived and the race was sensibly halted to allow teams to change tyres. After a break, the race resumed on a very wet track but that made little difference to Lockie, who won again as Forward gave chase in the McLaren. Burton was the best of the 2-litre cars as Sinclair posted a late retirement.

Andy Newall (Chevron B6) was the class of the massive 45-car Guards Trophy field. None of them had any answer for the pace of Newall, who went clear with a typically attacking opening stint. Second became a father and son battle between the Lenham of Simon and Cam Jackson and Westie and Ben Mitchell in their Chevron B8. However, the Lenham started to overheat and was retired, leaving the Mitchells to take a well-deserved second place. Third was Richard Piper’s Brahma while the GT battle of the TVRs fell to Mike Whitaker.

The 30-car Historic Formula 2 field provided another glorious spectacle on the Grand Prix circuit. Spots of rain on the parade lap caused some anxious moments but, thankfully, the rain didn’t increase too much and the race ran out in largely dry conditions. 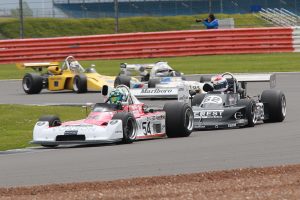 Miles Griffiths took the early lead in his Ralt RT1 and was able to edge further clear when Andrew Smith retired his March 742 with a failed battery. Instead, a tremendous contest for second raged between Matt Wrigley, Manfredo Rossi and Fraser Gibney. Meanwhile, Glenn Eagling was having a fabulous race in his GRD and closed right in on the battling trio. Wrigley eventually got second after a great contest.

The second Historic F2 delivered another glorious spectacle. Once again, Griffiths got the drop and was able to extend his lead, while main interest focused on the progress of Andy Smith and Martin Stretton, both starting at the back after problems in race one. They stormed up the field and eventually Smith moved ahead of his arrival as he closed in on second place Matthew Watts in the ex-Marc Surer car. However, Watts was getting quicker and quicker and held his ground to see off Smith while Stretton took fourth.

Michael Lyons romped away in the opening Aurora Trophy race, putting his Lola T400 well clear of the chasing pack before a safety car period bunched them up. But from the restart Lyons quickly went away as Greg Thornton (Chevron B24) and the best of the 2-litre cars chased from a distance with Mike Bletsoe-Brown (Chevron B27) and series newcomer Andrew Storer (Chevron B34) next up.

Another shower arrived just as the cars were on the warming up lap on Sunday. However, the track soon dried, but that was little consolation to Lyons who had by now parked the Lola with a problem. After retiring from the opening race, Mark Dwyer started his March 742 from the back on Sunday, but very quickly shot through to take the lead from Bletsoe-Brown.

The Dunlop Saloon Car Cup and the Historic Touring Car Championship shared a spilt grid with a fabulous field. Up front Simon Garrad was the class of the pack and won convincingly in his mighty Nissan Skyline. The other Skyline of Ric Wood ran second until slowing in the final laps and was nearly caught by the battling Sierra RS500s of Dave Coyne and Sean Brown.

Garrad picked up where he left off to guide the fire-breathing Nissan Skyline home for a commanding win in Sunday’s second race. However, he was never too far ahead as Paul Mensley drove a fine race in his Sierra RS500 to lead the chase.

In the Historic Touring Cars, the Ford Falcon of Dan Williamson went clear for a resounding win as Lotus Cortinas and Minis and battled in his wake as Marcus Jewell headed home Bill Sollis. On Sunday, Williamson completed a weekend double but the highlight was a fantastic four-way Mini battle as Dan Wheeler headed Sollis, Nick Paddy and David Ogden.

There were two races for the Classic Formula 3 and Classic Formula Ford 2000 championship and once again it was Andrew Smith in his March 783 who set a searing pace to win twice. Benn Tilley gave valiant chase in his earlier March but could not rival Smith. In third, Tony Hancock (Lola T670) completed the podium, while Murray Shepherd was best of the Formula Ford 2000s.

A fantastic 70s Road Sports grid was further boosted by some cars in the 80s Production series. On a wet track, it was young Will Plant who was the class of the field to take his second win of the season in his Morgan +8. His father Richard ran second early on but came under increasing pressure from renowned rain master John Williams, who was briefly able to get his Porsche 911 up into second before Plant senior re-took the place. 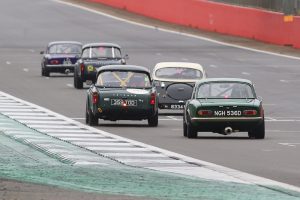 At the end of the afternoon, the Historic Road Sports field had an increasingly wet track to deal with and Kevin Kivlochan found that out to his cost at the first corner when he spun his AC Cobra. Meanwhile, Robin Pierce took control in his Morgan +8, as Kivlochan set about a stirring recovery drive. However, another quick spin in the loop cost him any chance of catching the Morgan, but second was Kivlochan’s reward as the Lotus Elans of John Davison and Paul Tooms battled over third place.

Finally, the GT and Sports Car Cup was a welcome guest race for the weekend with a magnificent 55-car field for a one-hour enduro. Best of the pack was the Jaguar E-type of Julian Thomas who shared the car with Calum Lockie as Lockie took his third win of the weekend.