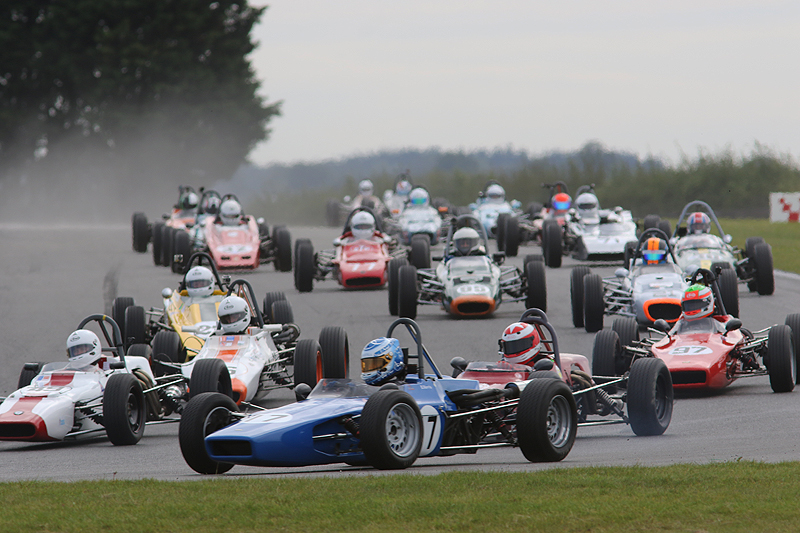 The life of the late Jim Russell will be celebrated in a new two-day Historic Sports Car Club race meeting at Snetterton next spring.

The Jim Russell Trophy Meeting (4/5 April) will feature 10 Formula Ford races to honour the memory of the racing school pioneer and also the early heritage of the Formula Ford Festival. Before moving to Brands Hatch in 1976, the first four Festivals were run at Snetterton from 1972 to 1975.

Other races will include the HSCC Classic Clubmans Championship where the Class B cars use the Ford Kent engine and a race for Ford Pinto-powered Sports 2000s is also under discussion.

The spread of races will form a journey through Formula Ford history, from the earliest Pre ’72 cars in the Historic category via the cars of the 1970, 1980s and 1990s to the latest Kent-engined cars in the Champion of Snetterton races.

Historic Formula Ford races at Snetterton over recent seasons have been outstanding and another weekend of close and exciting racing is likely for the annual Norman Greenway Trophy. The trophy for the aggregate winner of the Historic FF1600 races is presented in memory of commentator Greenway who was the voice of Snetterton for many years. The weekend coincides with what would have been his 98th birthday and members of his family, including his wife Barbara, plan to be at Snetterton.

Jim Russell, who died in March aged 98, lived most of his life in Downham Market in Norfolk and started his racing career at Snetterton in 1952. He won the British Formula 3 Championship three years in a row from 1955 to 1957 but ended his career after being injured in an accident at Le Mans in 1959.

In 1956 he set up the first motor racing school at Snetterton and played a key role in the early career of many future stars including Emerson Fittipaldi, Derek Bell and Jacques Villeneuve. Countless thousands of people had their first experience of a racing car at the Jim Russell Racing Drivers’ Schools.

It is hoped that his widow Jenny, who was a nurse in Norwich hospital when Jim was being treated for his Le Mans injuries, will attend the event along with other people with connections to this motor racing pioneer.

Andy Dee-Crowne said: “We are delighted to be able to honour the memory of a man who did so much for the sport. Snetterton is the ideal place to celebrate Formula Ford and we will have races for cars spanning 50 years of the category.”

The HSCC hopes to stage a display of cars relevant to Jim Russell’s life and is keen to hear from anyone with a suitable car.