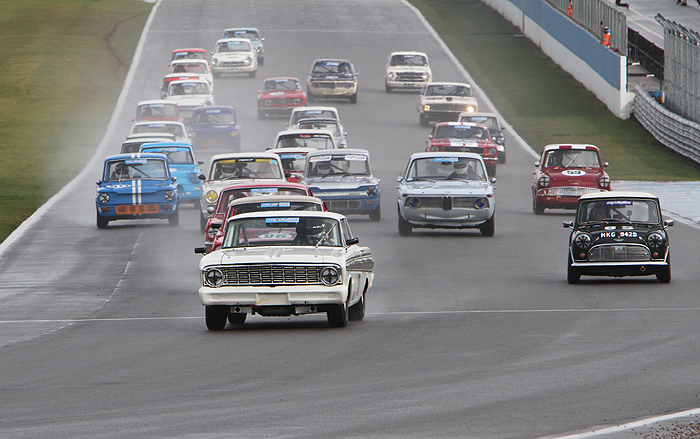 A superb entry of 250 cars will pack the Donington Park paddock for the Historic Sports Car Club’s opening race meeting of the season (Sunday 6 April).

After a winter of work, drivers will get the chance to go racing once more during a busy eight-race programme and every race has drawn a fine grid of cars. At an excellent 24 cars, the smallest grid is for the Classic Racing Car Championship and will be boosted by up to five reserve entries from the over-subscribed Formula Junior race. Meanwhile the over-full Guards Trophy entry has been accommodated by slotting one class in with two other races.

The Millers Oils Historic Formula Junior Championship season opens with yet another bumper entry and it is David Methley in his Brabham BT6 who should set the standard. However, he has plenty of rivals including father and son Michael and Andrew Hibberd in Lotus 27 and Lotus 22 respectively and Sam Wilson in his Lotus 20/22. Historic Formula Ford champion Callum Grant could upset the Junior formbook in his Merlyn Mk5/7 and fellow former FF champion Westie Mitchell will give his De Tomaso a debut race.

The other single-seater race is the opening round of the HSCC’s Classic Racing Car Championship with multiple champion Ian Jones heading the field in his Lotus 59. The similar car of Antony Ross, the Brabham BT30 of former champion Ian Gray and the Palliser WDB2 of Andy Jarvis will take the battle to Jones while a gaggle of 1-litre F3 cars includes Peter Thompson’s Brabham BT21 and Mike Scott in his BT28.

Strong entries for the Historic and 70s Road Sports Championships will get both categories off to a flying start. Defending champion John Shaw carries number 1 on his Porsche 911 in the Historic division, but at the head of the race the Morgan Plus 8s of Richard Plant and Philip Goddard should be to the fore along with rapid Lotus Elans in the hands of drivers like Peter Shaw and Roger Waite. Defending champion Oliver Ford tops the 70s field in his Lotus Europa, but faces a different challenge from the Barter family. Julian has switched to a Lotus Elan and has handed his TVR 3000M over to his father Charles.

Another driver starting a title defence is Tim Davies (Lotus Cortina) in the ByBox Historic Touring Car Championship. His opposition includes similar cars for Neil Brown, Mike Gardiner and former Anglia racer John Pugsley along with the Mini Cooper of Pete Morgan who won the corresponding race a year ago in treacherous conditions.

Wrapping up the afternoon will be a 40-minute race for the Guards Trophy where Chevrons are traditionally to the fore. Philip Nelson, Charles Allison and Ross Maxwell all field potent B8s and back out after a quiet 2013 season is the super successful B6 of Michael Schryver, which he will share with his son Will. Aiming to upset the Chevron pack is the very rapid Ginetta G16 of father and son Graeme and James Dodd, while the GT cars are topped by the flying TVR Griffith of Michael Whitaker.

After qualifying from 9.10am, the first of eight races will start at 13.10. For more details about Donington Park, please go to www.donington-park.co.uk Adult admission is £15.