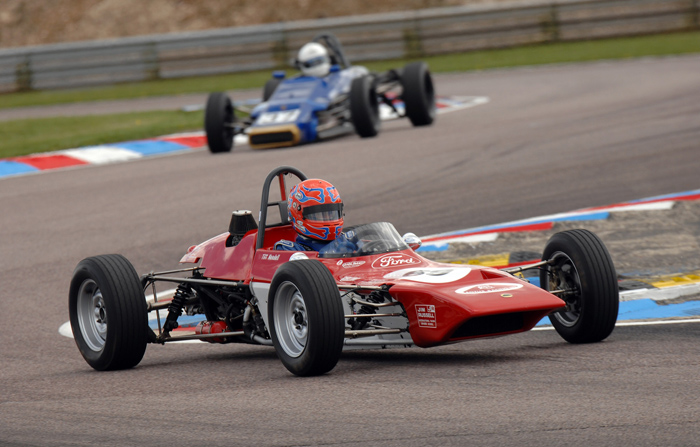 Victories for racing aces Tiff Needell and Patrick Watts were among the headlines of the 18-race programme from the Historic Sports Car Club at the second Thruxton Easter Revival (Saturday/Sunday 19/20 April).

Despite some challenging weather on Sunday, the weekend featured some truly memorable races as the Hampshire track welcomed a fine entry of classic and historic single-seaters, sports, GT and touring cars.

Over four decades after his first win at Thruxton, Tiff Needell won again at his home track in a thrilling Historic Formula Ford Championship round after a mighty four-way battle. Spins for the Merlyn Mk20s of Michael O’Brien and Maxim Bartell left Needell battling Benn Simms in his Jomo JMR7 and Needell used all his experience and guile to win by six hundredths-of-a-second.

“I won my first ever race here in this car back in 1972,” said a jubilant Needell. “And now, more than four decades later, I’ve won in it again. It was a tremendous race, needing to look in both mirrors all the time – great fun!” Simms turned the tables on Sunday, but only just, and then added victory in the Historic Formula Ford 2000 Championship race.

The opening round of the new HSCC Super Touring Car Championship was one of the highlights of the weekend. James Dodd led away from pole in his Honda Accord and established a comfortable advantage over a mighty four-way fight behind for second place, involving both John Cleland’s Vauxhall Vectra and the Peugeot 406 of Patrick Watts.

Stewart Whyte made it a Honda one-two by working his way through into second in his Accord, before spinning on the exit of Church Corner. A late-race driveshaft failure for Dodd then promoted Cleland into the lead and Watts to second as the Super Touring legends wound back the clock.

“The first few laps were pretty hectic, and after that, James was gone and driving very well,” said Cleland. “I’ve raced against James a few times now and I have huge regard for him; if he was in the current BTCC, I really think he would shine there, too.”

On Sunday, Cleland initially edged clear, but as the Peugeot increasingly found the grip around the damp track, Watts snatched the lead and Simon Garrad (Renault Laguna) wasted little time in following through into second.

Oliver Ford and David Tomlin waged another big battle for 70s Road Sports Championship glory. They raced side-by-side at times and Ford’s Lotus Europa had just regained the lead when Tomlin’s invitation class Ferrari 308GTB suffered a late-race puncture that pitched him into a 360-degree spin and retirement. Ford then had an untroubled run to the chequered flag; with fellow Europa driver Jim Dean second from Peter Shaw’s completed TVR Tuscan. Sunday’s Historic Road Sports race was re-started after a torrential downpour and it was Robin Pearce who scooped an impressive first win in his Morgan Plus 8.

Callum Grant recovered from a poor start for the Millers Oils Historic Formula Junior Championship race in his Merlyn Mk5/7 to hunt down Andrew Hibberd’s Lotus 22 for the lead. The pair then battled until an off on oil slowed the Lotus and Grant made good his escape. Grant made it a weekend double with another win on Sunday.

The Guards Trophy sports-racing car encounter developed into a cat-and-mouse affair between Chris Goodwin in his McLaren M1B and James and Graeme Dodd in their Ginetta G16. In the closing stages, the chasing Goodwin – who had not raced at Thruxton for 20 years – homed in on Graeme Dodd, but was just three seconds shy at the flag.

The Guards Trophy GT battle was a corker as Paul Tooms (Lotus Elan) and Mike Whitaker (TVR Griffith) fought race-long. The result was only determined when Whitaker – increasingly struggling with his rear tyres – spun on the final lap and allowed Tooms to nip past and win.

Neil Fowler streaked clear of the Derek Bell Trophy opposition in his March 782 and ultimately emerged victorious by a commanding 26 seconds, well clear of all the action. Reigning DBT winner Neil Glover (Lola T330/332) has his hands very full of the fleet Classic Clubmans Mallock Mk20/21 of Mark Charteris as Charteris clung on and refused to admit defeat.

In Sunday’s rain, Charteris was peerless, finishing nearly 40 seconds clear of Fowler. The coveted Jochen Rindt Trophy was Fowler’s reward for being the weekend’s best Formula 2 performer. Charteris completed a memorable weekend by winning the Classic Clubmans Championship opener, but only after a fine dice with Ray Mallock’s Mallock Mk18b.

The ByBox Historic Touring Car Championship pack delivered another thriller on Saturday as Neil Brown’s Ford Mustang fought to hold off the Lotus Cortinas of Tim Davies, Mike Gardiner and David Tomlin and the BMW 1800Ti of Sean McInerney. With the lead changing over the finals laps, Brown finally grabbed the advantage back from Davies at the final corner. However, on Sunday McInerney prevailed to take his first win in the championship.

Finally, the programme was wrapped up by wins for Richard Trott (Chevron B43) in Classic F3 and Michael O’Brien (Merlyn Mk20) in Classic Racing Cars.