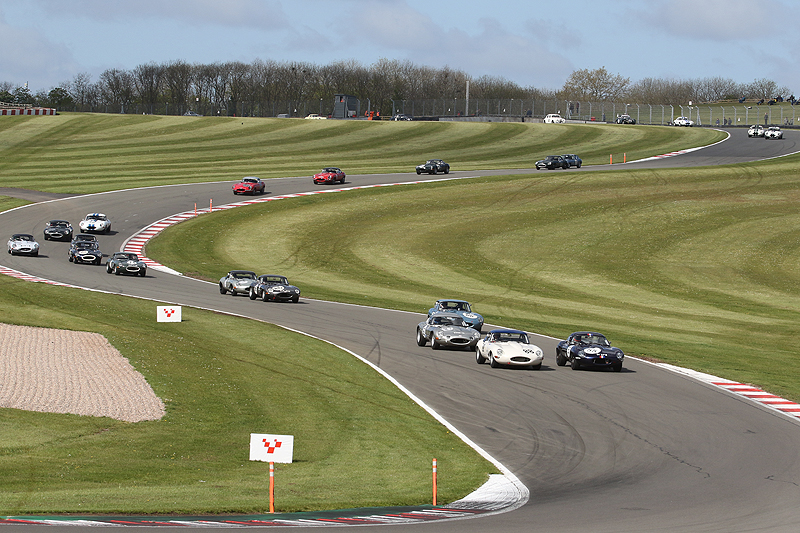 Five races from the Historic Sports Car Club were at the heart of the Donington Historic Festival (May 3-5) as Cameron Jackson and Peter de la Roche claimed Formula Junior doubles and Julian Thomas/Calum Lockie took a thrilling victory in the opening round of the Jaguar Classic Challenge.

The 32-car Jaguar field made a fabulous sight as the hour-long race started with a grid that had quality and variety to match quantity. Friday’s qualifying session ran on a damp and slippery track and as conditions improved slowly the grid was only settled in the closing moments. Richard Kent timed his last lap perfectly to claim pole by half a second from the remarkable Niall Murray (Class D E-type), Calum Lockie, Jason Minshaw and the Pearsons as a second covered the top five cars.

Kent, also sharing with Gary Pearson, and Minshaw set the early pace but Minshaw was soon into the pits after a wire came off the distributor as he exited the chicane. Meanwhile, Thomas and John Pearson were running strongly and, after the pit stops, it was Lockie versus Gary Pearson in a glorious contest over the closing laps.

Into the chicane for the final time they went head-to-head and Lockie had to catch a big slide as Pearson skittered through the gravel. Having shared the second-placed car with his brother John, Gary P also clinched third by sharing Kent’s car. Joaquin Folch and Nick Padmore rounded out the top six, while Murray led class D until the stops but it was the car of father and son Jon and Jack Minshaw that came through to a class D-winning seventh overall. Jack was particularly impressive in his first race at this level. 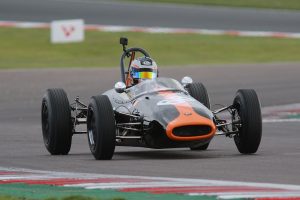 Niall Murray (Elva 100) made the early pace in the opening front-engined race but was later sidelined by diff failure as de la Roche swept ahead on his way to a clear victory. The battle for second then raged between Michael Hibberd (Lola MK2) and Alex Morton (Condor S2) but a trip up the chicane escape road for Hibberd’s newly-acquired Lola left Morton clear in second from Nick Taylor (Elva 100). 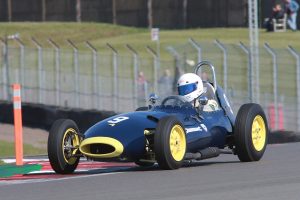 Sunday’s race lost Justin Fleming (Lola Mk2) to the McLeans gravel trap on the first lap and it was de la Roche who quickly went clear as Chris Drake (Terrier) worked ahead of Murray for second and Hibberd retired the Lola with brake issues.

Jackson was unstoppable in the rear-engined races and twice powered his Brabham into clear first lap leads. The result marked three perfect weekends to date this season for Jackson with pole, win and fastest lap in three different cars. On Saturday, Richard Bradley made it a Brabham BT2 one-two as he narrowly fended off Peter Morton’s Lightning Envoyette. Bradley clinched second again on Sunday but only when a bolt came out of the gear linkage and Morton had to park the Lightning.