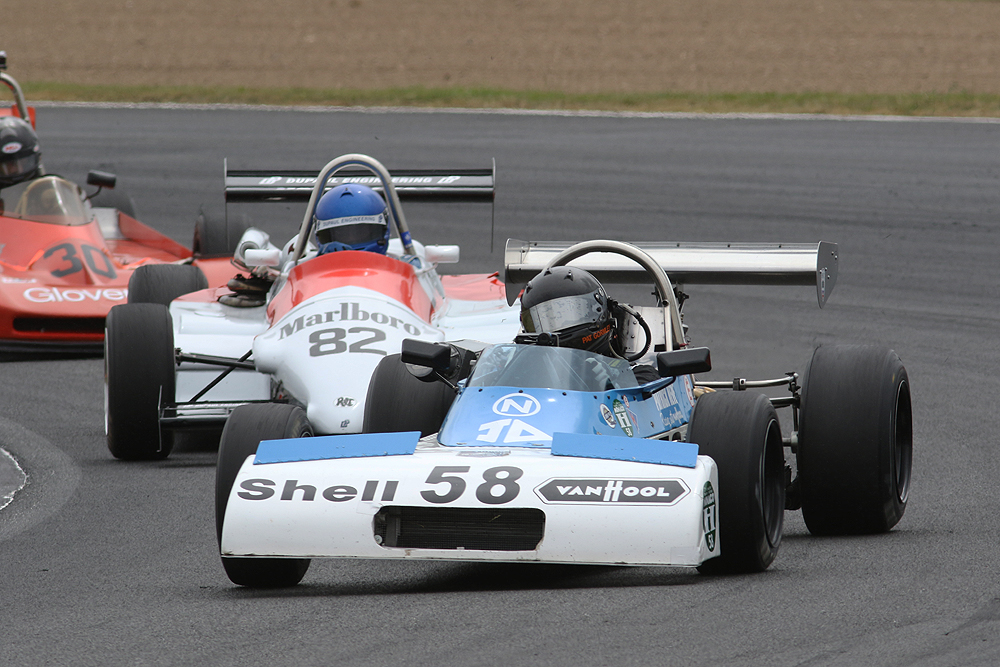 A superb array of categories delivered 15 quality races on the Grand Prix track and excellent competitor support produced many strong grids, including the sensational 28-strong Historic Formula 2 field (see separate press release). As fine battles raged all through the field, Richard Evans (March 742) won twice but only after Dean Forward (March 782) set a scorching pace in the opening race. A brush with a backmarker cost Forward victory and he then chased Evans relentlessly in the second race.

Although he won both rounds of the Historic Formula 3 Championship to make it six on the trot, Milicevic (Brabham BT21B) had to race incredibly hard to fend off the challenge of Andrew Hibberd (Brabham BT18). In the second race they traded the lead many times but Milicevic was ahead by 0.156s at the flag. 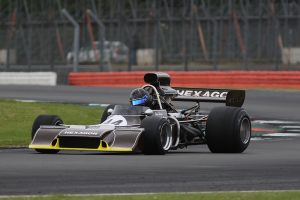 Lyons (Lola T400) had things a little easier in the pair of Derek Bell Trophy races as he stormed the fearsome Formula 5000 to a brace of wins. In the second race, F5000 newcomer James Hadfield starred in his debut race with the Trojan T101 of his father Simon and charged through to second place after a tyre problem in the opening race. David Shaw (Eifelland March 721) was twice on the podium, taking second in Saturday’s race after fellow F1 racer Max Smith-Hilliard retired his Surtees TS9B with major engine woes.

Shaw switched to his ex-Piquet Ralt RT1 for the Classic Formula 3/Classic FF2000 races as a superb 32-car grid delivered battles all down the order. Anthony Hancock (Lola T670) won the opener with Shaw in hot pursuit but the tables were turned on Sunday when Shaw dived ahead in traffic and was able to hold Hancock at arm’s length to the flag. At the head of an excellent URS FF2000 pack was Ian Pearson’s Royale RP30 as young Ben Stiles (son of seasoned FF1600 racer Trevor) twice finished second on his UK race debut.

The Historic Formula Ford races were excellent as the two key title contenders went head-to-head. Cameron Jackson (Lola T200) had close to a two-second advantage over Ben Mitchell (Merlyn Mk20) at the flag as they went well clear of the pack. Mitchell overturned the order on Sunday after a glorious showdown to keep the championship status quo unchanged. Max Bartell was the best of the rest as Will Nuthall headed a six-way contest for fourth. 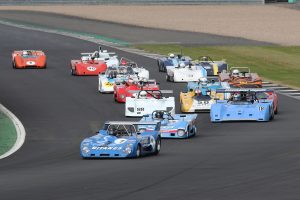 The new format for the Pre ’80 Endurance Series of two half-hour races meant that Leo Voyazides went solo in the stunning DFV-powered Lola T282 and duly bagged two commanding wins. Robert Oldershaw, in his first weekend racing his recently completed Lola T290, led the chase of the flying Cosworth car. A throttle cable failed on Saturday but that was fixed in time for Oldershaw to charge from the back of the grid on Sunday. On his way through Oldershaw had to contend with the similar car of Mark Richardson and Nick Adams in Richard Dodkin’s March 717.

Martin O’Connell was the master of the Guards Trophy, pulling quickly clear at head of an excellent field in Sandy Watson’s Chevron B8. The B6 of Michael Schryver and Simon Hadfield headed the pursuit but was later handed a 30s penalty for stopping just outside the pit-stop window. Instead, a surprised and elated Paul Ugo/Ben Rushworth moved up to second as Rushworth raced a B8 for the first time.

With his father Grahame feeling unwell, James Dodd went solo in the hour-long Jaguar Classic Challenge and delivered a tremendous performance as mid-race rain on an already oily track made conditions treacherous. For much of the race, Ben Short led the chase before making a late a stop to hand over to Nick Riley. In still tricky conditions, Riley slipped to third behind Gary and John Pearson.

Straight from the Lola on Sunday morning, Voyazides climbed into his AC Cobra and led the opening stint of the GT and Sports Car Cup race. Simon Hadfield handled the second stint before Voyazides went back in to win by half a minute from the E-type of John and Gary Pearson.