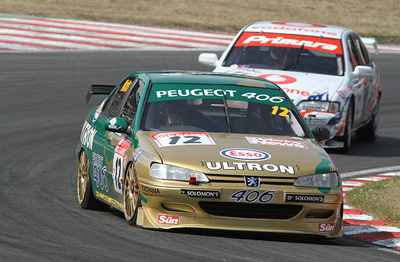 Scorching weather and tremendous racing from more than 400 cars made the 24th running of the Historic Sports Car Club’s Brands Hatch Historic Super Prix one of the best in the history of the event.

Martin O’Connell (Chevron B36), Patrick Watts (Peugeot 406) and James Dodd, who won both in his Nissan Primera and Chevron B31. In the second Super Touring race, Watts delighted the large Sunday crowd with victory from the back of the grid as touring car legend John Cleland claimed a podium finish in his Vauxhall Vectra.

Watts won both Historic F2 races, but had a major fight on his hands on Sunday as Richard Evans fought ahead in his March 742. Unfortunately, a rear wing failure put Evans off the road and out of the race, leaving Hans Peter (Ralt RT1) to head the chase of Watts. O’Connell and Dodd shared the Martini Trophy wins as a strong grid delivered two excellent raced, while Dodd also won the opening Super Touring race. Watts then stormed through to narrowly win the second race from Dodd after starting from the back of the grid when a loose wheel nut put him out of the opening race.

One of the weekend’s best races was the Historic Formula 3 counter on Saturday from a fabulous field of 26 1-litre F3 cars. When early leader Roland Fischer retired his Tecno, the lead was contested by Peter Thompson (Brabham BT21) and Keith Messer (Vesey). They traded the lead numerous times until Thompson grabbed victory by half a second. “That was a fantastic race,” said Thompson. “Historic F3 is quite new to me and it’s great fun.”

O’Connell’s charging weekend should have included victory in the Guards Trophy race, which ran a massive 44-car field for a 40-minute enduro. However, his Chevron B8 lapsed onto three cylinders and then stopped with a flat battery after a late safety car period, leaving James Schryver to fend off Charles Allison in another B8 for victory.

Two bumper grids of Road Sports cars delivered plenty of close racing and victories for Oliver Ford (Lotus Europa) and Andy Shepherd (Lotus 7), while another Lotus victory was taken by Ian Jones in his Lotus 59 in the Classic Racing Car Championship.

Greg Thornton was a double winner in the Derek Bell Trophy in his March 761 Grand Prix car, but only after seeing off a determined challenge from the F2 March 782 of Peter Meyrick. Benn Simms (March 803B) and Nelson Rowe (Reynard SF79) won in Classic F3 and Historic FF2000, while the Historic FF1600 race featured a fine lead battle as teenager Sam Mitchell really took the fight to Callum MacLeod. Eventually MacLeod’s greater experience told, but the former F3 racer admitted that he’d had to work harder than he expected for his victory.

Mike Gardiner recovered from a first-lap moment in the gravel at Paddock to take his Ford Falcon to Historic Touring Car victory, while Jon Milicevic claimed another Formula Junior victory in his Cooper T59 during an 18-race weekend that delivered fine racing from big grids.

The HSCC season continues over the weekend of 3/4 August at the Croft Nostalgia Weekend.