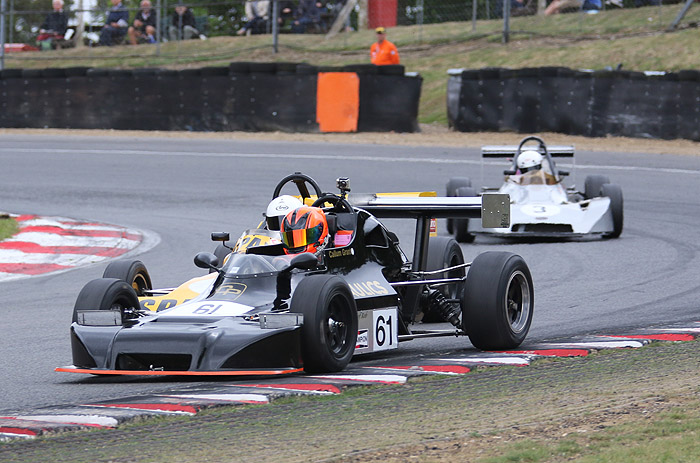 The focus for the Historic Sports Car Club moves to the Brands Hatch Indy circuit this weekend (26/27 September) for the penultimate race weekend of the HSCC championship season.

A very busy 20-race programme includes the final rounds of the Duo BRDC Formula 4 Championship as well as a full schedule of HSCC championship races at a point in the season when title contests are coming to a head.

One of the closest battles comes in the Historic Formula Ford 2000 Championship, with a double-header supported by Appino making up rounds 11 and 12 of 13. The deciding round will be held at Silverstone in early November.

The three big players are Tom Smith (Royale RP27), Andrew Park (Reynard SF81) and Callum Grant (Delta T78). With one score to be dropped for the final reckoning, it is all very close and going to Brands the adjusted totals are Smith on 179, Park on 167 and Grant on 160. With 50 points to be won and lost on the Indy circuit, it really is wide open.

The final two rounds of the HSCC Classic Clubmans Championship will put the remarkably rapid front-engined sports-racing cars into action and it is reigning champion Mark Charteris who has a slight advantage in his Mallock Mk20/21.

Kevin Kivlochan has one hand on the ONI PLC HSCC Historic Road Sports Championship title after a tremendous season so far in his Morgan Plus 8.

This will be round 12 of 13 in this year’s championship and it has come down to a battle between Kivlochan’s rumbling 3.5-litre Morgan and the nimble Lotus Elan of Roger Waite. Former single-seater racer Waite can only go out and try and take another win and hope that Kivlochan has problems.

The last time the 70s Road Sports Championship was at Brands Hatch, at the HSCC Super Prix in July, it delivered one of the races of the weekend. This time, the cars are competing on the Indy Circuit and Lotus Europa racer James Dean is secure as champion as his chief rival Peter Shaw cannot match Dean’s title.

The title race for the HSCC Historic Formula Ford 1600 Championship is really hotting up as drivers come back to Brands Hatch for rounds 13 and 14 of 15.

As many as five drivers are still firmly in the title race, and it is racing newcomer Richard Mitchell who has a useful margin going into the weekend. It’s been an up and down season for the Devon youngster who joined the Speedsport team this year with virtually no previous racing experience. Despite that, he was straight on the pace and won four of the first nine races.

Mitchell heads the title race by 19 points and would need to be 26 points clear by the end of the second race to settle the title ahead of the Silverstone final. Striving to come between Mitchell and the title are Elden Mk8 racers James Buckton and Rob Wainwright, Lola T200 racer Simon Toyne and Merlyn Mk20 pilot Jonathan Baines (Merlyn Mk20).

On Saturday, the grids for the Classic Formula 3 and Classic Racing Car Championships will be combined, while on Sunday the Formula 3 cars race alone to make it a double-header championship round.

The Classic F3 title race between Max Bartell (Chevron B34) and Paul Dibden (Argo JM6) is very finely-balanced. Bartell starts the weekend just three points ahead, but has won the last four races on the bounce, so certainly has the momentum in his ex-Rupert Keegan car. Dibden, meanwhile, won the season opener at Thruxton and has been consistently quick in his ex-David Sears Argo.

Running with the F3 cars on Saturday only are cars contesting the penultimate round of the Classic Racing Car Championship. Heading the entry is multiple champion Ian Jones in his gorgeous Lotus 59 and he’s joined by the similar car of rapid hillclimb competitor Mark Goodyear.

This is a crucial weekend for the overall title race in the ByBox Historic Touring Car Championship. Two races form rounds 14 and 15 of 16, with just the final round at Silverstone still to come and former champion Simon Benoy (Hillman Imp) could even seal the title at Brands if he can bag two more class wins and his rivals don’t fare so well.

Reigning champion Tim Davies has had another tremendous season in his Lotus Cortina with a gaggle of overall and class wins. However, a lack of starters in his class has often cost him the chance of taking maximum points and his title hopes are all but gone.

However, Benoy cannot expect an easy ride to the title and is it Peter Hallford (Ford Mustang) who is now the prime challenger for the crown. To claim maximum points Hallford will need to see off the very rapid Ford Mustang of ex-pat Kiwi Warren Briggs. Adrian Oliver and Steve Platts are the key class rivals for Benoy.

Two races will cater for the front-engined cars from the Historic Formula Junior category, although not a round of the FJHRA/HSCC Silverline Championship. Stuart Roach is sure to have his Alexis Mk2 charging along at a prodigious rate. So, too, will Justin Fleming (Lola Mk2) and Chris Drake in the recently-acquired Terrier Mk4 that he took to a debut win at Mallory Park last month.