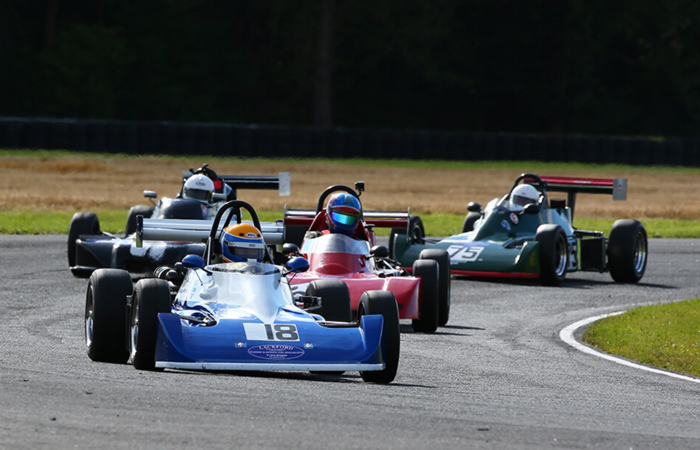 Championships from the Historic Sports Car Club delivered a tremendous on-track spectacle at the Croft Nostalgia Festival (8/9 August) as a weekend of superb racing in front of a bumper crowd was topped off by an unforgettable air display from the awesome Vulcan.

Warren Briggs was a clear ByBox Historic Touring Car winner on Saturday in his Ford Mustang, but was beaten home in the second race by the Lotus Cortina of Tim Davies. However, the battle for class E really grabbed the attention as Simon Benoy beat Andy Jones to the line by three-thousandths of a second after 21 minutes of Imp dicing!

Jim Dean took maximum 70s Road Sports points in the opening race in his Lotus Europa but in the second race it was Julian Barter (Lotus Elan) who was the leading points’ scorer. Barter raced from the back of the grid after retiring from race one when he mistook a fuel warning light on the dashboard to be an oil warning light in the unfamiliar car.

Close finishes abounded in the single-seater races and Saturday’s closest finish came in the Historic F3 Championship as David Methley (Merlyn MK14) best Peter Thompson (Brabham BT21) by just a third of a second. Devonian Mike Scott scooped the Sunday spoils in his Brabham BT28 after completing the podium on Saturday to make the long trip north worthwhile.

Meanwhile, Rob Wainwright headed Callum Grant by only a second in the first Historic FF1600 race as championship leader Richard Mitchell clobbered the tyres and retired. In another close finish on Sunday, James Buckton beat Wainwright by a fraction of a second in a battle of the Eldens.

Full Croft results are at www.mstworld.com