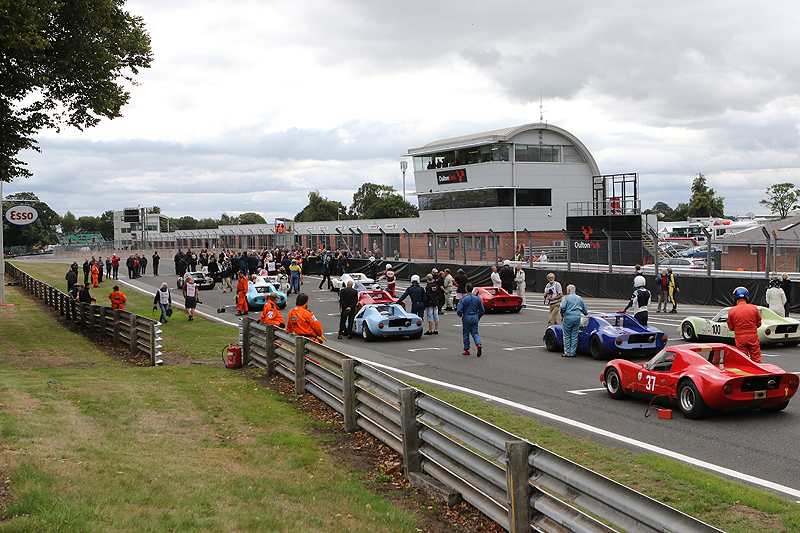 A unique celebration of the Chevron B8 and B8 sports-racing capped the Historic Sports Car Club’s Oulton Park Gold Cup meeting over the Bank Holiday weekend (August 25-27).

Some first class racing, a bumper crowd and a raft of off-track attractions all played a role in a memorable weekend, but it was the 50th anniversary of the Chevron B8 that took centre stage as a group of former Chevron racers joined in this very special occasion. 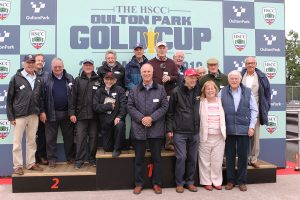 Those on hand included local ace John Lepp and Digby Martland, the first driver to win in a B6 at Oulton Park during the 1967 season. Fittingly, Martland presented the awards at the end of the 50th anniversary race. Alan Rollinson, Ian Skailes, John Burton, Roger Heavens, Ian Harrower, Tony Goodwin and Peter Lawson were among the other period drivers at the Cheshire track to share memories from the late 1960s.

The dedicated Chevron B6/B8 race thrilled the fans as 19 cars from the Bolton-based company of Derek Bennett lined up. Racing one of Sandy Watson’s cars, former single-seater and GT ace Andrew Kirkaldy headed the field away and was able to hold off the chasing Andy Wolfe and David Pittard throughout the 40-minute pit-stop race.

Pittard worked ahead of Wolfe before the pit stops and then closed in a little when Kirkaldy struggled to get his car moving after his pit stop. Within a lap, the gap was down to nothing as a safety car removed Kirkaldy’s cushion. However, Kirkaldy quickly got his head down and rebuilt a small margin as Pittard came under renewed attack from Wolfe and the places changed on the final lap.

The Dunlop-shod cars had their own class and were headed for many laps by Simon Hadfield until he was forced to pull off from behind the safety car. Instead, Dan Eagling moved up to win the section and take a share in the Gold Cup with Kirkaldy. “To get the chance to race a Chevron B8 is a massive honour, and to win the Gold Cup is even more memorable,” said Eagling.

To complete a stunning weekend, Kirkaldy also took the B8 to a remarkable victory in the Guards Trophy race. Run in the very wet conditions that were a feature of Sunday’s programme, the race had a capacity field and Kirkaldy was mighty as he set a pace that no one else could come close to matching. Simon Hadfield, guesting in Andy Yool’s B8, started from the back of the grid as a reserve and stormed through to claim second, despite losing the windscreen wiper on the warming-up lap, while Dan Eagling was a mighty fifth overall and GT winner in the Sebring Ginetta G4R. 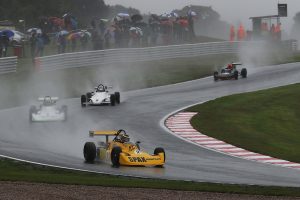 Andrew Park completed a Historic Formula Ford 2000 double, scoring a late win on Sunday as four drivers battled hard in tough conditions. As first race on Sunday, the joint Historic and Classic field raced in heavy rain but Benn Simms, Park, Ian Pearson and Callum Grant still delivered a fine contest. Park did it again in Monday’s dry race, but was under growing threat from Simms until a throttle cable problem almost put Simms into the clutches of Grant.

John Davison’s Elan was the class of the Historic Road Sports race, but Paul Tooms kept him honest in his Turner, while John Williams scored an overdue first 70s Road Sports victory in his Porsche 911SC after dealing with the Lotus Europa of early leader Will Leverett. In both races, Sunday’s slippery track made it very difficult for the Morgan Plus 8 racers as Kevin Kivlochan (HRS) and Russell Paterson (70s) each took a third place.

It was a good day in the rain for the Woodhouse family in Formula Junior. Dad Mark headed Alex Morton to win the front-engined contest and son Jack did the same later as he fended off Andrew Hibberd in the rear-engined race. Hibberd then switched from his Lotus 22 to his Brabham BT18 to chase John Milicevic in the first Historic Formula 3 race. A second F3 win in a re-started race on Monday was enough for Milicevic to retain his title with 11 wins from 12 starts. 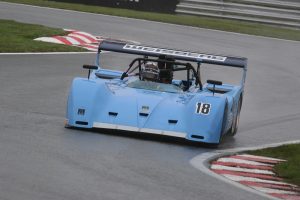 Calum Lockie was peerless in the Pre ’80 Endurance races as he tamed the 800bhp March 717 Can-Am car of Richard Dodkins, although a minor last-lap spin at Knickerbrook almost de-railed his romp to victory on Sunday. Such was his advantage over John Burton’s Chevron B26 that Lockie had time to re-start the engine, do a three-point turn and still win by 46 seconds. Lockie was superb in the dry on Monday despite a spirited early challenge from Burton and broke the 100mph lap marker on his way to a second win.

Jon Minshaw and Phil Keen won the Jaguar Classic Challenge race on Sunday during a pre-Goodwood shakedown for a freshly-prepare E-type. Meanwhile, Paul Hogarth and Chris Boardman were delighted to take Historic Touring Car Challenge spoils in their BMW M3. 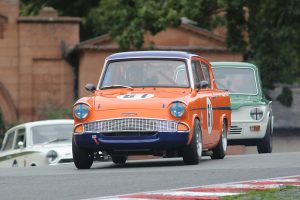 Richard Belcher won the opening Historic Touring Car race on Monday morning but was eliminated from the second after contact from the Ford Mustang of Mark Watts, leaving Barry Sime’s Mini Cooper to take victory. In the opening race, Sime had given determined chase to Belcher.

Finally, Ben Mitchell overcame adversity to win the Historic Formula Ford counter, despite an accident in testing on Saturday and a stub axle failure in qualifying. In the race, his challenge came from the ever-present Callum Grant, with Ben Tusting chasing hard as well. It was incredibly close over the line as only a tenth of a second covered the three Merlyns.