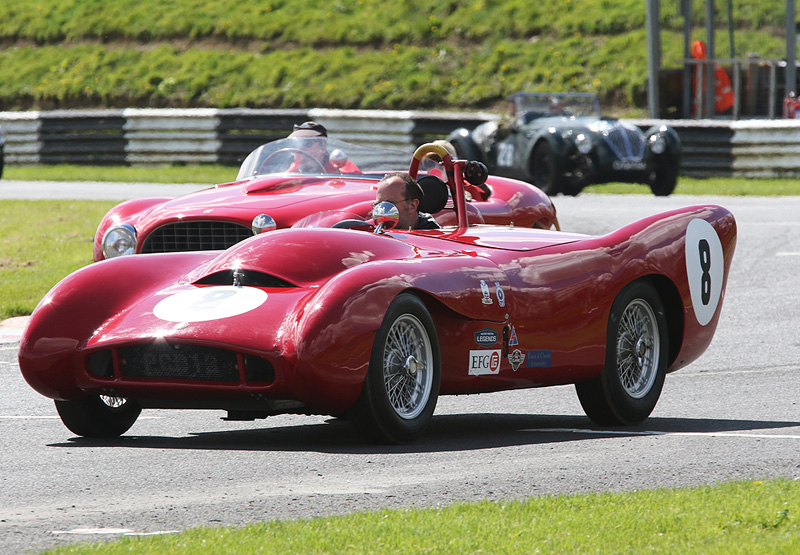 The Historic Sports Car Club celebrated its 50th anniversary in style at Castle Combe over the weekend (16/17 April) by recreating the grid from the inaugural Griffiths Formula race in 1966.

On each day of the anniversary race meeting, a collection of cars that competed back in 1966 lined up on the grid and later completed parade laps of the track. Joining them were some of the drivers who took part in the race that led to the creation of the HSCC.

Notable cars included two that are still owned by the same person, half a century later. Bernard Worth (Ferrari 166 Mille Miglia) and Ian Dussek (HRG 1500) were back on the Castle Combe circuit after a 50-year gap while Fred Damodaran travelled from Scotland to be re-united with the Allard J2X he owned and raced from the mid-1960s to the late 1980s. The car is now owned by Italian Massimo Battati and will next be in action at the Monaco Historic Grand Prix.

A Jaguar D-type from Jaguar Heritage commemorated the model’s success in the 1966 race, while the Lotus Bristol MkX raced to second place in 1966 by Chris Warwick Drake was there with current owner Malcolm Paul. The late Betty Haig was one of the prime movers behind the Griffiths Formula and her Frazer Nash was there.

Stephen Curtis, Robert Barrie, Mike Ward, Frank Mockridge, Chris Drewett and Ivan Sharrock all took part in the original race and were back at Castle Combe to join in the celebrations. Many old friendships were re-kindled as the drivers recalled the 1966 race and two grid walkabouts allowed the spectators a chance to see the cars and chat to the drivers. The parade laps were flagged away by Penny Woodley, daughter of Guy Griffiths, who started the 1966 race.

“It is amazing to be back at Castle Combe after 50 years and it’s wonderful to see so many of the original cars and drivers back here. It’s been a lovely weekend,” said Damodaran.

“We’re very pleased with how the weekend has gone,” said HSCC Chief Executive Officer Grahame White. “There has been a very special atmosphere and I’d like to thank all the car owners and drivers for making such an effort to come and be part of our celebrations.”

The weekend was filmed by the team at SSTV and the 50th anniversary grid and parade will be part of the TV programme about the weekend, which will be broadcast on Motors TV on the evening on Saturday 21 May.