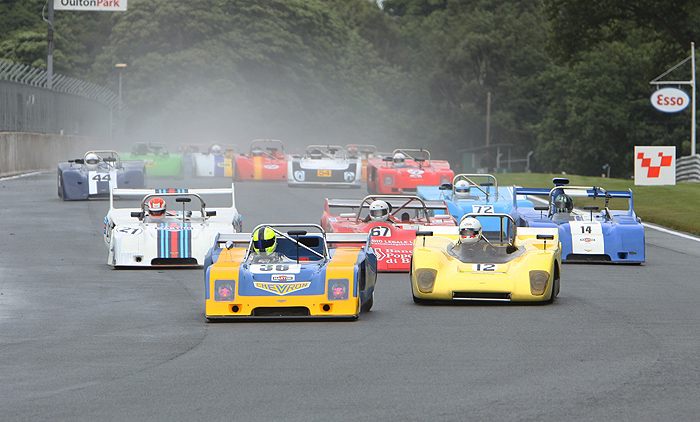 Four hundred cars tracing the story of 60 years of racing at Oulton Park will gather at the Cheshire track for this weekend’s Historic Sports Car Club’s Gold Cup meeting (25/26 August).
The annual Gold Cup meeting is the biggest historic racing festival in the north of the country and this year’s event had added significance as it marks 60 years since the circuit opened in August 1953. The high-profile race programme features grids that reflect the first 50 years of the Oulton Park story, ranging from the 500cc Formula 3 cars of the early 1950s through to the Super Touring cars of the 1990s.
To mark the occasion, a display of cars from the Oulton Park history has been arranged and will include the March 711 used by Henri Pescarolo to win a heat at the 1971 Oulton Park Gold Cup. Among other notable cars for the display will be the ex-John Coombs Jaguar Mk1 saloon, ‘BUY 1’.
The racing life of John Coombs will be celebrated when the E-type Challenge race, which opens Sunday’s racing, runs for the John Coombs Trophy. Coombs, who died earlier in August aged 91, was a successful racer in the early 1950s before switching his focus to entering cars for other drivers. In April 1961, Coombs was central to the competition debut of the E-type at Oulton Park. Coombs entered one of two E-types in the race for Roy Salvadori at the very start of the model’s competition history.
The Super Touring Trophy races will be real crowd-pleasers with the prospect of John Cleland, Patrick Watts and Tim Harvey back on the same grid together for the first time in nearly 15 years. Harvey hopes to dash back from the Knockhill BTCC meeting on Sunday to race Paul Smith’s Ford Sierra RS500 in Monday’s race, while Watts (Peugeot 406) and Cleland (Vauxhall Vectra) are also back in cars from their BTCC careers.
Another star name in action is Olympic champion Sir Chris Hoy, who makes his historic racing debut in a Mini Cooper in the Historic Touring Car Championship round. With a 40-car entry, this will be another treat for the fans.
On Sunday, a fabulous 60-car entry for the Guards Trophy will underline its status as the best-supported race championship in Britain. Sunday’s pair of 40-minute races marks the penultimate round of the championship with the sports-racing cars and GT cars split into separate races.
No celebration of the Oulton Park story would be complete without a gaggle of Chevrons, the cars built by the late Derek Bennett at Bolton in the late 1960s and 1970s. The timeless B6 and B8 designs run in the sports-racing section of the Guards Trophy, while later sports-racing versions should dominate the double-header for the Martini Trophy. Then, in the combined Derek Bell Trophy and Classic Formula 3 races, a range of single-seater Chevrons will be in action.
A new young star of historic racing could be crowned on Monday in the HSCC’s Historic Formula Ford Championship, when nearly 30 cars will take to the track for round 11 of 13 in this year’s championship. The rising star of 2013 is 17-year-old Sam Mitchell, who has a 44-point lead going into the Oulton Park race. If that grows to more than 50 points, he will be the champion.
Packing out a fantastic race programme are rounds of the HSCC’s Historic Road Sports, 70s Road Sports, Historic Formula Ford 2000 and Classic Racing Car Championships: all with strong and varied fields. Meanwhile, adding further quality and variety to this packed 20-race weekend are races for Formula Juniors, both front and rear-engined, Classic Clubmans and the FISCAR series for 1950s sports cars.
On Sunday, the first of nine races will start at 12.05. On Monday, the first of 11 races will start at 11.30 after qualifying from 8.30am.