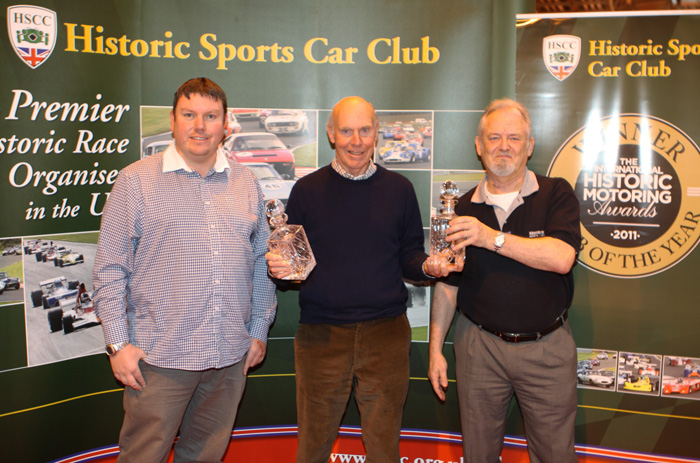 Richard Attwood was the star guest of the Historic Sports Car Club when the club presented ‘Marshal of the Year’ awards to Ian Chalmers and Peter Talling during Autosport International at the NEC.

Former Le Mans winner Attwood joined the club’s CEO Grahame White to present the awards to Chalmers (Newbury) and Talling (Plymouth) in recognition of their outstanding support for HSCC race meetings during the 2013 season. They each marshalled for 20 days at HSCC events.

“After a very long season, with an increased number of marshalling days, our band of loyal followers has remained very strong,” said White. “Over 100 marshals completed five days or more for us in a very busy motor sport calendar. Such has been the support that, for the first time, we have awarded a joint ‘Marshal of the Year’ award.”

In total, well over 400 individual marshals attended HSCC race meetings and they collectively completed over 3000 days in support of historic racing.

The two volunteers attended Autosport International and were delighted that Richard Attwood was on hand to present their awards. Chalmers’ 2013 season included working as the safety car observer at Silverstone, while Talling made regular trips north from Devon to be a flag marshal. Both of them plan to marshal for the HSCC again in 2014.

“While this award highlights two individuals, we are indebted to all of the marshals who supported our events during 2013,” said White. “Their enthusiasm, expertise and dedication is vital to running race meetings and we send our sincere gratitude to all of our marshals and officials.”