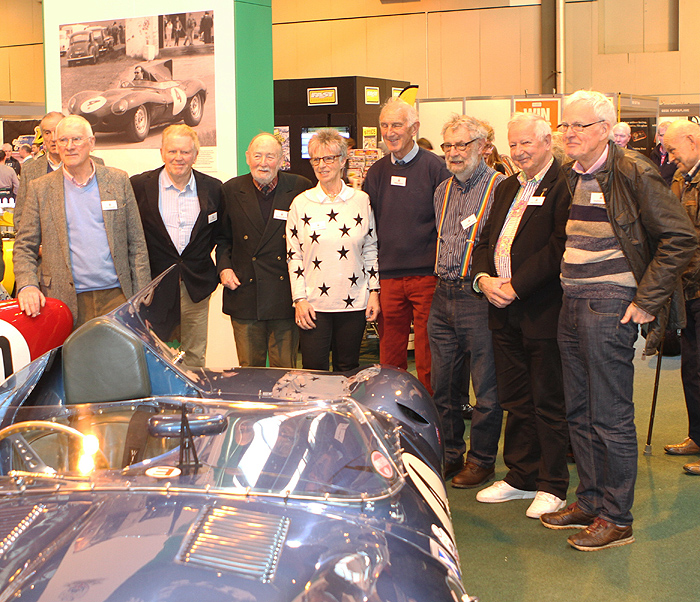 The Historic Sports Car Club launched its 50th anniversary season in fine style at Autosport International at the Birmingham NEC (14-17 January), with a 10-car display showing the club’s origins and current breadth of activity.

Alongside the D-type was the Lotus-Bristol Mk10 that Chris Warwick-Drake took to second place in the 1966 race.

On Friday seven drivers from that first race were on hand to celebrate the 50th anniversary and recall a time when motor racing was rather different. In attendance were Geoff Thomas (who raced a Porsche 356 in 1966), Stephen Curtis (Cooper Bristol), Michael Ward (Aston Martin DB2), Bernard Worth (Ferrari Type 166), Ivan Sharrock (HRG), Chris Drewett (Frazer Nash) and Philip Martino (HRG). On Saturday, Healey Silverstone driver Graham Walker visited the stand. Another guest was Penny Woodley, daughter of Guy Griffiths, who dropped the flag at the start of the 1966 race.

Remarkably, both Stephen Curtis and Michael Ward are still racing, 50 years later, while Bernard Worth, Philip Martino and Ivan Sharrock still own the cars they raced back in 1966.

To set the seal on a tremendous opening for the HSCC’s season-long anniversary, the club was awarded the ‘best historic motor sport stand’ award during the closing stages of the show. With a sell-out crowd on both Saturday and Sunday, Autosport International was the perfect platform to start a very special year for the HSCC.

“This was a great way to start our season,” said HSCC Chief Executive Officer Grahame White. “We had a wonderful line-up of cars on show and it was a real pleasure to meet the drivers who raced at Castle Combe in 1966. Winning the award was the icing on the cake.”

The HSCC’s 2016 racing season will start with a celebration event at Castle Combe on 16/17 April when the original 1966 grid will be re-created during two days of racing from many of the club’s categories.