Historic FF1600 to set a record at Silverstone Classic 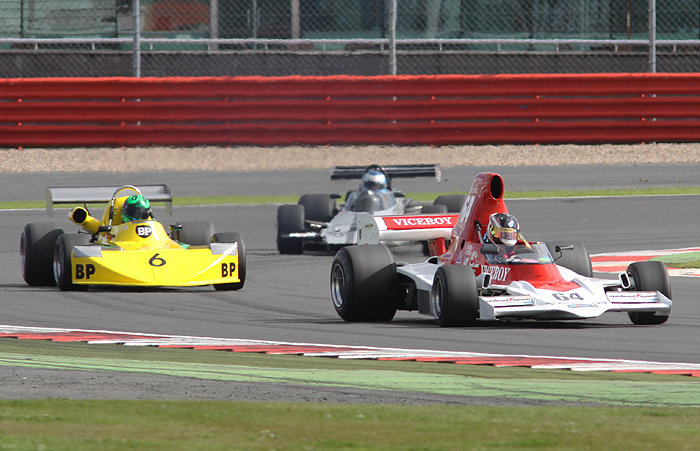 A new record for the biggest grid ever seen in Formula Ford racing will be set at the Silverstone Classic (26-28 July) when a capacity grid of 54 cars from the Historic Sports Car Club’s Historic Formula Ford category contest a pair of races on the Grand Prix circuit.

The HSCC has a leading role to play in the world’s biggest festival of historic racing as the club is once again organising the racing element of the Classic. As well as the Historic Formula Ford grid, the club is also responsible for the Super Touring Trophy and the Formula 5000/Formula 2 grids.

Around 120 cars from the HSCC will be in action as both the Super Touring Trophy and the F2/F5000 grids are both over 30 cars. Heading the Touring Car field will be Brands Hatch winners Patrick Watts (Peugeot 406) and James Dodd (Nissan Primera), while former BTCC champion Tim Harvey will be re-united with his Ford Sierra RS500 Cosworth.

Last year, the mighty 5-litre Chevrolet powered Formula 5000s won both of the F2/F5000 races, but it very close. Michael Lyons (Lola T400) won the first race by just 14-hundredths of a second from Martin Stretton’s F2 March 742. Then, on the Sunday Stretton came even closer to topping the F5000s when he finished 12-hundredths of a second behind Simon Hadfield’s thundering Trojan T101.

After coming so close last year, Stretton is back for another shot at slaying the giants, including the Lola of Lyons, with a later March 782 F2 car. However, there is another driver in the F2 ranks with the potential to run with Stretton. Richard Evans spends more time preparing cars than racing them, but is prodigiously quick when he gets back into the cockpit of the March 742 he shares with Andrew Smith.

Other rapid F2 runners include Steve Allen (Chevron B25), James Claridge (Brabham BT38) and Philip Hall (March 752), while top contenders from the ranks of 1600cc F2 cars are friends and rivals Tim Barrington (Lola T240) and Paul Bason (March 712). A welcome return to F2 racing is made by Lord Paul Drayson (March 712), now a champion of alternative fuel in top level motor racing.

In the Historic FF1600 pack, Callum MacLeod starts as favourite in the Merlyn Mk20 run by Silverstone-based SpeedSport. However, 17-year old Sam Mitchell pushed the former single-seater champion very hard at Brands Hatch last time out and will now take the fight to MacLeod on the Silverstone Grand Prix circuit.

“The Silverstone Classic is an amazing event, and we are very proud to be closely associated with it,” said Grahame White, CEO of the HSCC. “I’m sure the races for our three categories will add to what promises to be an outstanding weekend of racing.”