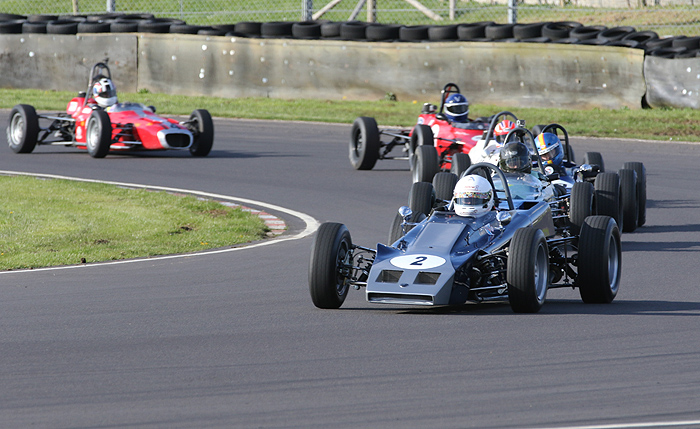 Fine racing in spring sunshine from some big grids got the 50th anniversary season of the Historic Sports Car Club off to a flying start at Castle Combe over the weekend (16/17 April).

Some of the weekend’s best racing came in the opening rounds of the Historic Formula Ford 1600 Championship, which ran as two points’ scoring races due to the size of the entry. In the first race, a mighty contest between Mark Shaw and Dan Eagling raged race-long as former F3000 racer Shaw claimed his first race win since moving over to historic racing.

Shaw was starting his title campaign with Mike O’Brien’s squad while Eagling, in only his second FF1600 race, was giving the Lotus 61 of Andy Langridge a shake-down run after a restoration. Eagling battled into the lead before a brief safety car period. From the green flag, Eagling and Shaw went wheel-to-wheel as James Buckton and Benn Tilley making it a four-way battle.

However, as the race developed the lead contest was between Shaw and Eagling and it was Shaw who just got the verdict. “There was a lot of pressure on,” said the Scot. Tilley belied his limited experience to take a fine third and fastest race lap with Buckton fourth as Will Nuthall fended off Danny Stanzl and category newcomer Neil Shinner for fifth.

The second Historic FF1600 race was for the other half of the over-subscribed grid. Callum Grant set the pace in this one but had to deal with a determined challenge from Ben Tusting. Tusting could not win as he’d picked up a jump start penalty but, by disputing the lead with Grant, Tusting was able to get far enough clear of Benn Simms to keep second place once the penalty was applied.

Michael Schryver and Simon Hadfield blitzed the 40-minute Guards Trophy race in Schryver’s Chevron B6. At the head of the fantastic 38-car grid was James Schrvyer (Chevron B8) but he jumped the start and then had to race hard to negate the time penalty and retain second. Charles Allison made it an all-Chevron podium, while the GT division was all-TVR Griffiths as the Mike Gardiner/Dan Cox car led home Peter Thompson and John Spiers.

Ray Mallock took his U2 Mk2 to victory in the front-engined Formula Junior race. However, as Mallock struggled later in the race with gearbox issues, Andrew Tart chased hard in the front-wheel drive Bond and the gap was down to a second at the flag. “I was very happy to keep up with someone like Ray,” said Tart.

Stuart Roach was on course to win the rear-engined Formula Junior race until he parked his Alexis Mk4 after battery failure. Cameron Jackson, battling with clutch problems, took over in his Brabham BT2 while Greg Thornton, fresh from racing his Ford Mustang in the previous race, led the chase in his Lotus 20/22.

The pair of HSCC Road Sports Championships started their seasons with bumper grids, excellent racing and two wins for Lotus Elans. In the 70s division, Julian Barter was the class of the field but Peter Shaw (TVR Tuscan) was always a contender after leading the early laps.

On Sunday, Shaw switched to his Historic Road Sports Lotus Elan and saw off the Morgan Plus 8 squadron for victory. Reigning champion Kevin Kivlochan quickly made up ground from a lowly grid position until struck by a misfire and the car later stopped completely. Tim Pearce had a quick spin at Quarry but fought back to grab second from Richard Plant in their Plus 8s.

Cumbrian Andrew Park took the opening Historic Formula Ford 2000 Championship round but had to defend hard in the early laps as Nelson Rowe mounted a stern attack. However, Rowe was having gear selection woes and that led to a quick spin, which promoted Benn Simms to second but Park was away and clear. Andy Jarvis topped the concurrent Classic Racing Car section in his Palliser.

Peter Thompson took victory in the opening round of the HSCC Historic Formula 3 Championship. Andrew Hibberd set the pace in the race until sidelined with fuel pump issues and so Simon Armer and Ewen Sergison completed the podium. In Classic F3, Richard Trott went clear from the similar Chevron B43 of Simon Jackson as Ian Pearce topped the concurrent URS Classic FF2000 division.

Concern over his gearbox forced Mark Charteris to make a cautious start in the Classic Clubmans race and prompted an excellent early dice as Malcolm Jackson led. Spencer McCarthy joined in as well, but Charteris was soon able to take control as McCarthy moved through to second from Jackson.