Historic F2 title to be decided at Dijon 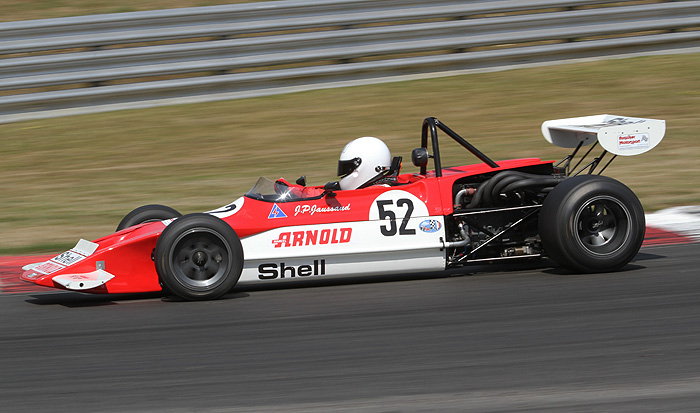 The destiny of the Historic Sports Car Club’s 2013 Historic Formula 2 Championship will be decided during two races at the fabulous Dijon circuit in France over the weekend of 5/6 October.

Going into rounds nine and ten of the season, Frenchman Robert Simac (March 712M) has the slight advantage after a fine campaign in the class for 1600cc F2 cars from the early 1970s. Simac has finished on the class podium in all eight races to date and only needs to score eight points across the two races at Dijon to be unbeatable. One win or two third places would be enough to settle the title.

Simac’s target is made easier by the fact that his major rival Bob Sellix (Lyncar 005) is likely to have insufficient starters in the class for Formula Atlantic cars to score maximum points. The other title contender is Tim Barrington (Lola T240) who could come into contention if he has two strong results in the 1600cc F2 class and Simac falters.

While the title battle is played out among the classes, the stage is set for some more epic racing at the head of pack among the later 2-litre F2 cars. Martin Stretton (March 742), Matthew Watts (March 772P) and Nick Fleming (Ralt RT1) are all proven race winners and tremendous competitors, while Irishman Darwin Smith (March 722), Swiss racer Hans Peter (Ralt RT1) and Frenchman Philip Harper (Ralt RT1) add further front-running quality to another fine F2 entry.

Two more HSCC categories will be in action at Dijon during an event that takes in the final two races of the season for the Martini Trophy. Fleming will be back in action in these two races in his Chevron B36 and should set the pace. His rivals include Italian Lola racer Michele Liguori and German Thomas Hardy (Lola T210), while the Lola T492s of Paul Stevenson and Mark Richardson head the Historic Sports 2000 class.

Meanwhile, an excellent 25-car field will gather for the pair of Historic Formula 3 races which incorporate the popular Nations’ Cup. A dozen British racers will join drivers from another six European countries to make a very international field. Leading contenders include Dean Forward (Tecno), Peter Thompson (Brabham BT21), Francois Derossi (Chevron B17) and Roland Fischer (Tecno) in what will be a fitting finale to a great season for the 1-litre F3 cars.