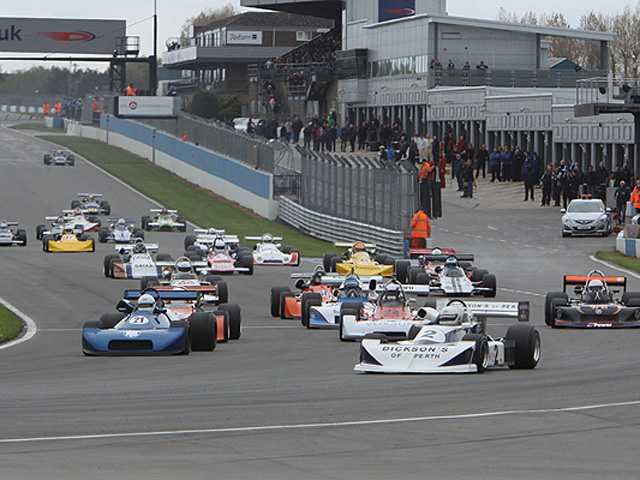 The 2013 Historic Formula 2 Championship season will start in style during the Donington Historic Festival (3-5 May) with a superb 26-car field for a pair of races during one of the biggest historic race meetings of the British season.

Running over three days for the first time this year, the Donington Historic Festival has a superb race line-up and the Historic Sports Car Club is again responsible for organising the on-track element of the event.

The HSCC-managed Historic F2 Championship has an excellent schedule this season, with subsequent dates at Spa-Francorchamps, Brands Hatch Grand Prix, Zandvoort and Dijon. The championship caters for the 1600cc cars of the early 1970s and the later 2-litre cars as well as Formula Atlantic cars.

The Donington field is packed with potential front-runners, capped by former champion Martin Stretton (March 742). Stretton will be eager to erase the memory of a disastrous weekend at the 2012 Donington Historic Festival when his car was damaged on the warming-up lap for the opening race. He will be very tough to beat, but at least half a dozen drivers will be aiming to do just that.

Heading a strong European contingent will be Philip Harper (Ralt RT1), while Scottish charger Nick Fleming has a similar car and could prove to be the biggest threat to Stretton. However, Andrew Smith (March 742) showed stunning form in the recent non-championship races at Thruxton, while drivers like Peter Meyrick (March 782), Mark Dwyer (March 742), Peter Williams (March 782) and Jamie Brashaw (March 782) are all aiming at the podium. Heading the Chevron contingent will be Philip Gladman (B34D), David Wild (B35D) and Grant Tromans (B42).

Among the 1600cc class, local racers and close friends Tim Barrington (Lola T240) and Paul Bason (March 712) will be to the fore, while Alain Lagache, Daniel Sauer and Robert Simac all bring their Marches to Donington. In the Formula Atlantic class, Frazer Gibney (March 76B) could be the man to beat and has already had a race win at Donington this season in his Lotus Elan.

Also featuring on the Donington programme are the opening two races for the HSCC-run E-type Challenge. At the head of the field, Alex Buncombe and Martin O’Connell will renew their mighty battle from a year ago, while drivers like Chris Scragg, John Pearson, Jason Minshaw, Jamie Boot, Mike Wrigley and Joaquin Folch add to a grid of excellent quality.