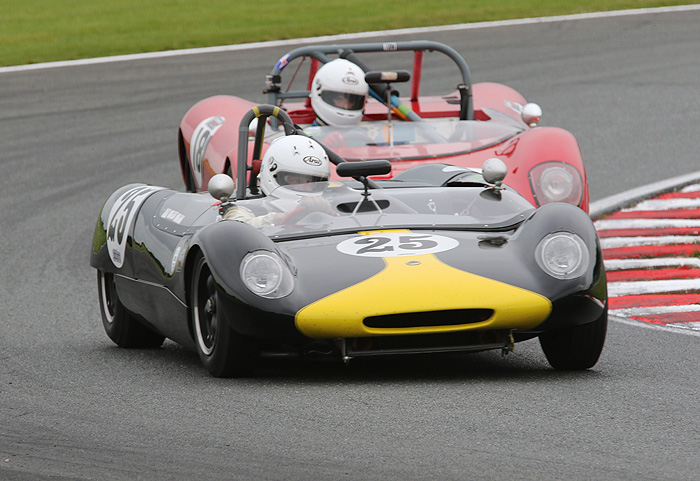 The season-long title contest for the Guards Trophy will be settled at Silverstone on Saturday (17 October) during the annual Finals Meeting for the Historic Sports Car Club.

With a full nine-race programme and over 210 entries it is going to be a fitting conclusion to the HSCC’s championship season and the main focus will be on the two titles still to be settled; the Guards Trophy for sports-racing and GT cars and the Classic Formula 3 Championship.

After a series of 40-minute races, the Guards Trophy will be decided in a 20-minute sprint race and it is Michael Hibberd (Lotus 23B) who heads to Silverstone with a slight advantage over Mike Gardiner (TVR Griffith) and Stuart Tizzard (Lenham Spider). If Hibberd wins his class, then he will be champion, but any other result will open up a chance for Gardiner and Tizzard.

In Classic F3, Max Bartell has one hand on the title after a fine season in the ex-Rupert Keegan Chevron B34 and only needs to finish the race to be certain of the title, even if Paul Dibden (Argo JM6) wins with fastest lap. With six wins from the last six rounds, it is looking good for Bartell.

An exceptional entry for the final round of the HSCC Historic Formula Ford Championship prompted a change to the timetable to ensure that all 48 entrants got a race. From two qualifying sessions, the slower 36 cars will go into a qualification race while the faster drivers go straight into the championship round. Then, the leading finishers in the qualification race will complete the grid for the points’ scoring race.

Another fabulous single-seater field will contest the final round of the Silverline Formula Junior Championship. Although Andrew Tart (Bond) has already won the title, there should be some great battling as Sam Wilson and Andrew Hibberd head the rear-engined cars and Tart goes up against Will Mitcham and Justin Fleming in the front-engined cars.

A 26-strong field will close the 70s Road Sports Championship season in style, and with several regular front-runners missing there could be some new names at the head of the action. Charles Barter (Datsun 240Z) will be the established benchmark while young Will Leverett (Porsche 911SC) is getting quicker and quicker in his first season in the car.

With the championship secure, Kevin Kivlochan can concentrate on chasing another ONI Road Sports Championship race win in his Morgan Plus 8, but has similar cars from Robin Pearce and Roddie Feilden and Lotus Elans from Peter Shaw and Roger Waite as strong opposition.

The Lotus Cortinas of Tim Davies and Mark Jones take on the Ford Mustang of Peter Hallford in the final round of the ByBox Historic Touring Car Championship, while the Formula 5000s of Neil Glover (Chevron B37) and Paul Campfield (Chevron B24) head the Derek Bell Trophy field. However, the smaller-engined cars of Mark Dwyer (March 742) and Richard Evans (March 79B) will be chasing very hard.