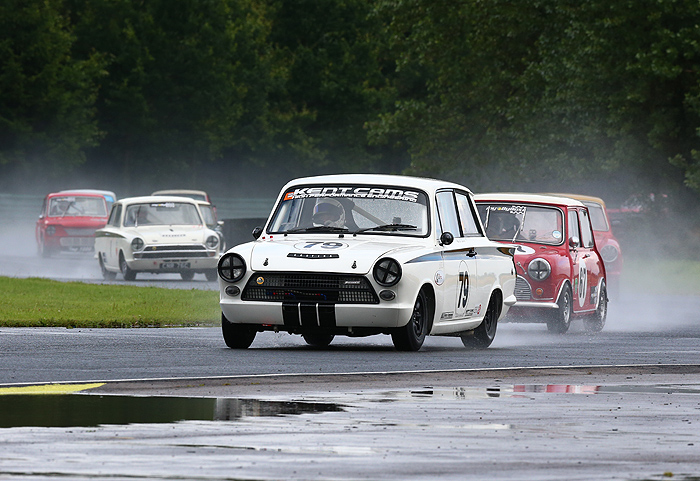 Exactly fifty years after Croft hosted its first race meeting, the Historic Sports Car Club was back at the North Yorkshire track to deliver some memorable race action during the circuit’s fifth annual Nostalgia Weekend (2/3 August).

First on track on Saturday was a tremendous 33-car field contesting a combined race for the Historic Road Sports and ’70s Road Sports Championships. In a Lotus one-two, the invitation class Seven S4 of John Pringle narrowly fended off the hard-charging Lotus Europa of regular pace-setter Oliver Ford. At the flag, the margin was less than a second as Ford chased Pringle, while Jim Dean completed the Lotus domination by taking third in his Europa. Ford turned the tables on Pringle in Sunday’s second race to win by just seven-tenths of a second as Julian Barter took his TVR 3000M to third. Simon Haughton (Lotus 7) and Patrick Ward-Booth (Ginetta G4) topped the HRS contenders.

Dean Forward fought his way through from sixth on the grid to triumph in the weekend’s first Historic Formula 3 Championship race in his Tecno, although his task was aided by early dramas for pole-sitter Benn Simms, who had to start from the pit-lane following clutch woes on the debut for his newly-restored Elfin.

Simms duly scythed his way through the field, but a misfire towards the end forced him to ease off, which was good news for Forward as the Tecno was now suffering with overheating issues. Paul Waine finished third in his De Sanctis as six different manufacturers filled the top six spots. Forward had no worries on Sunday as he repeated his Croft 2013 success with a handy margin over Simon Armer’s March 703.

The heavens opened with a vengeance shortly after the Miller Oils Historic Formula Junior Championship race got underway, which generated rooster tails of spray and reduced visibility considerably.

Jon Milicevic made the most of his pole position advantage and a clear track to sprint to an uncontested victory in his Cooper T59, with Jack Woodhouse (Lotus 20/22) and Peter Morton (Lightning Envoyette) completing the podium-finishers, which was repeated in Sunday’s race.

With the rain proving to be a great leveller, the first ByBox Historic Touring Car Championship race of the weekend took place in conditions suited to the Minis and, from seventh and ninth on the grid, Pete Morgan and Roger Godfrey wasted little time in working their way through to the front of the pack.

Godfrey battled ahead of Morgan to go on to victory, with a quartet of Ford Lotus Cortinas following behind. AC/DC front man Brian Johnson took the flag in a very respectable eighth in his Mini.

In the dry on Sunday, Tim Davies broke clear in his Lotus Cortina as Warren Briggs muscled his way through to collect the runner-up laurels with his Ford Mustang.

Pole-sitter Callum Grant sped to a straightforward victory in the first Historic Formula Ford Championship, going clear of an energetic contest for second place. The position was eventually claimed by Benn Simms from the very back of the 25-car grid, after the Jomo JMR 7 driver and Maxim Bartell (Merlyn Mk20A) edged Simon Toyne’s Lola T200 down to fourth on the final lap. Grant and William Nuthall (Jamun T2) headed Sunday’s race with local racer James Buckton (Elden Mk8) chasing Nuthall to the flag.

Andrew Park converted pole position into the top step of the podium in his Reynard SF81 in the Historic Formula Ford 2000 Championship, heading off Smith (Royale RP27) and the prolific Simms in his Royale RP30. Park completed a fine weekend with a second win on Sunday as Simms just pipped Smith for second place.

Steve Hodges piloted his Chevron B8 to a dominant triumph in the final race of Saturday, the Guards Trophy. Michael Whitaker prevailed in the duel for the runner-up spot and best of the GT cars, with his TVR Griffith seeing off the AC Cobra of Robert Bremner.

The flying Mark Charteris (Mallock Mk20) was peerless in both rounds of the Classic Clubmans Championship, while the weekend concluded with a 500cc F3 victory for Roy Hunt (Martin) by a small margin over John Turner (Cooper Mk9) and Darrell Wood (Cooper Mk7).