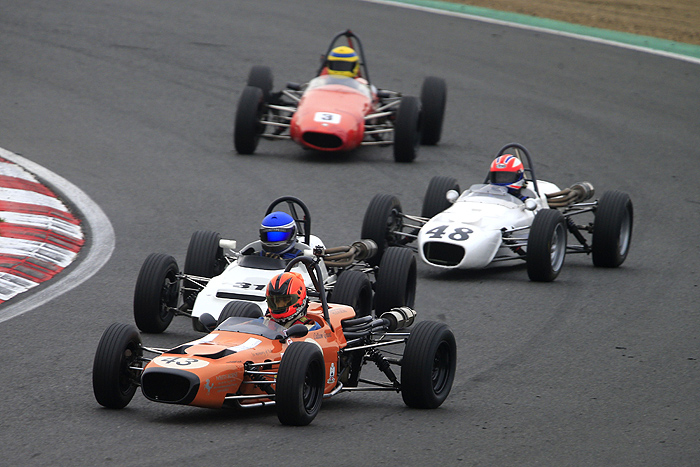 The race meeting, part of the club’s 50th anniversary season, celebrated Ian Dussek and Francis Mockridge, who both competed in the inaugural Griffith Formula race at Castle Combe in May 1966.

The Historic Formula Ford pack delivered two stunning races, with the top three covered by four-tenths of a second in both contests as rounds 11 and 12 of 14. It was Rob Wainwright from Benn Tilley and Callum Grant in the first race, but later on it was Grant, Tilley and Wainwright after two fantastically close and fair races as Grant and Wainwright continue their battle for the overall title.

Although he had already won the 2016 title, Andrew Park added two more wins to his remarkable run of victories in the Historic Formula Ford 2000 Championship. However, this was not always easy for Park as his throttle stuck open part way through the first race and he had to drive his Reynard SF81 on the ignition switch. Things were easier in the second race as Tom White (Osella) again finished second.

A strong field contested a double-header for the HSCC Classic Formula 3 Championship and URS Classic Formula Ford 2000 Series. Simon Jackson (Chevron B43) and Ian Pearson (Van Diemen RF83) were the double winners, with Pat Gormley (Safir RJF3) splitting them on the overall podium as he kept up a determined chase of Jackson. Adrian Langridge (Dastle Mk10) headed the 1600cc F3 cars.

Mark Charteris set the standard in the Classic Clubmans Championship for rapid front-engined sports-racing cars and won twice in his Mallock Mk20/21 as Spencer McCarthy (Mallock Mk20B/21) headed the pursuit. In the battle for the Class B title Clive Wood won twice but only by three-tenths of a second in the later race as arch rival Barry Webb ran him very close.