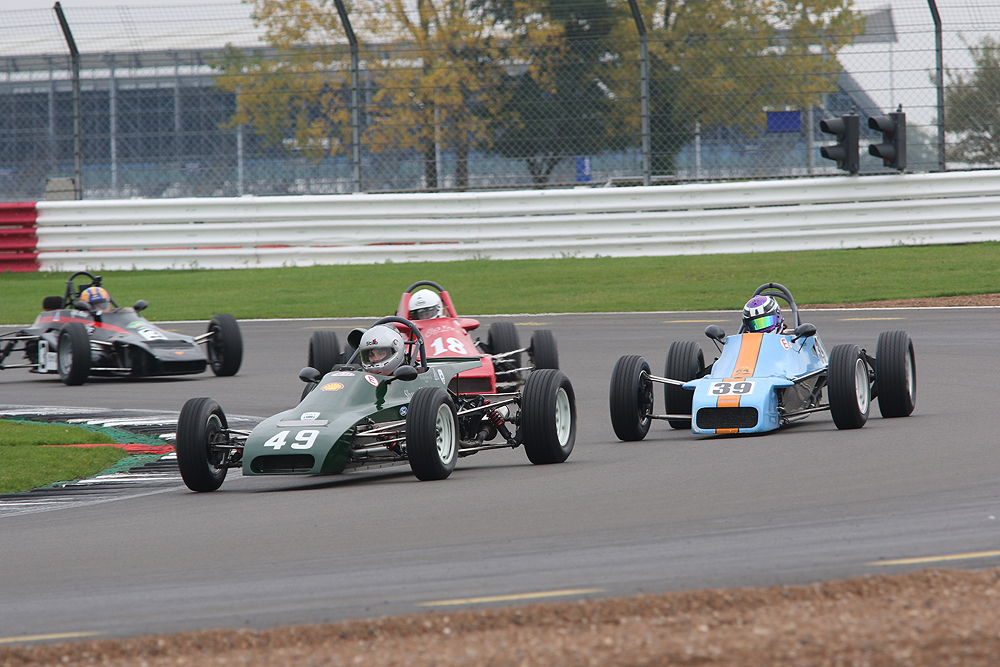 Close and exciting racing and championships settled in the sunshine was the story of the annual HSCC Finals Meeting on the Silverstone national circuit (17/18 October).

The Classic Formula Ford Championship races were as good as any with up to five cars delivering a slipstreaming barn-stormer in the sunshine of Saturday. It was Jordan Harrison who secured the overall title by winning once more in his Lola T540E despite the best efforts of Ben Tinkler and Henry Chart, as Rick Morris led the pursuit. On Sunday on a still damp track Harrison, Tinkler and Chart were again the class of the field, though Tinkler dropped back after a spin a Brooklands. It was Harrison versus Chart in the battle to the line and somehow on the dash to the flag Chart nosed his Van Diemen head by less than seven hundredths of a second to level the scores at one win each and end the season in style.

The Formula Juniors also had one dry race and one wet race and it was the Lotus 22s of Horatio Fitz-Simon and Clive Richards well clear at the head of the action. In the dry Fitz-Simon made an impressive Junior debut in Mike O’Brien’s car as he edged away for a clear win. However, in Sunday’s wet and slippery conditions Richards came back strongly and led much of the race though Fitz-Simon edged ahead briefly later on. But Richards regained control over the final laps for a classy victory. Ray Mallock and Nic Carlton-Smith were next up on Saturday, while Adrian Russell bounced back from retirement on Saturday to round out the overall podium on Sunday. 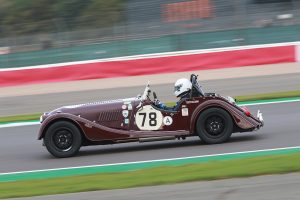 Will Plant really needed another overall race win to make certain of the 70s Road Sports title and that’s just what he did in his Morgan Plus 8, romping away as his father Richard played a support role in second. They were the better part of half a minute clear of the rest of the pack by the end of 25 minutes as Will duly secured the title. Jim Dean was third in his Lotus Europa but that was not enough to earn him another title.

Both Aurora and Geoff Lees Trophy races were excellent contests and it was Rory Smith who won the opener in the dry of Saturday in his Ralt RT4, boldly keeping the Formula Atlantic car absolutely flat through Copse on several laps. Mark Charteris chased hard in his March 742, but with worsening understeer could not keep on the tail of the Ralt.

Sunday’s race started in marginal conditions as to whether slick or wet weather tyres were the right call. Smith opted for slicks but could not contain the charging Samuel Harrison, who started on wets in his Formula 3 Dallara. Harrison charged through to take the lead, making the most of the wet early laps. But as the race developed, Smith was able to up the pace in the Ralt and was hunting the leader down on the final lap and one more lap could have led to a very different result. Friends and teammates Clive Wood (Chevron B29) and Martin Wood (March 79B) battled for third and just finished in that order.

Confirmed champion Andrew Smith was easily the class of the Classic Formula 3 field and won at a canter in both races. Leading the chase both days was Keith White in his Ralt RT1 but Smith was away and gone at a prodigious pace.

Andy Newall rounded out his Guards Trophy title-winning season with another victory in his Chevron B6. From a modest grid Newall was never troubled and won by a full lap over the B8 of David Forsbrey and the B6 of Nick Thompson and Sean McClurg. Ben Tusting brought the family Lenham P69 up into fourth in the closing stages, while John Davison was best of the GT cars and saw off the Lotus Elan Shapecraft of father and son Michael and Will Schryver.

Three races for Historic Formula Ford decided the championship and it was Cam Jackson who took a third title in his Winkelmann after three hard fought races. Tom McArthur made the recovery of the day to win the opener after dropping off the lead group before towing himself back into contention and wriggling through to the lead on the final lap at the expense of Horatio Fitz-Simon, Jackson and Linton Stutely.

Later on Saturday Fitz-Simon scored his first Historic FF victory by a 10th of a second from Jackson and McArthur while in Sunday’s rain it was Jackson and Fitz-Simon who made the early pace. However, they were both later disqualified for overtaking under yellow flags and so it was third placed Stutely who moved up to take the win, even though Jackson had still done enough to be champion once more. 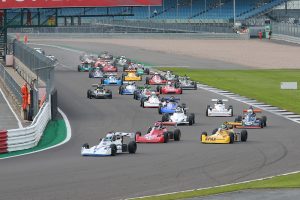 Another strong grid of Historic Formula Ford 2000s produced two find races and two wins for Graham Fennymore but it was never easy for the 2021 champion. Benn Simms and Tom Smith, who was guesting in Graham Ridgway’s car, chased hard in the opener. But it was on Sunday that Simms really came good and led all the way until the final corner, despite a mid-race red flag and re-start. Then Fennymore managed to squeeze up alongside and they ran wheel-to-wheel through Luffield with Fennymore seizing the inside line and winning the drag race to the flag by eight hundredths of a second. It was a fine contest to end a brilliant year for Historic FF2000 and Simms’s reward was the runner-up position over Ian Pearson, who was third and fourth in the two races.

John Davison was easily the class of the Historic Road Sports field and his Lotus Elan out-paced the Morgan Plus 8s in the 25-minute race. The situation was never settled for second as Tim Pearce just edged John Shaw in a battle of the Plus 8s and for Shaw a debut overall podium was a fine way to end his season. Simon King brought his Plus 8 into fourth before the next best Elans of Robert Rowe and Chris Merrick.

Two races for Historic Touring Cars delivered superb entertainment and a wet qualifying session and a damp truck made the opener a really absorbing affair. Dan Williamson initially led in the mighty Ford Falcon but the first of two spins cost him time and allowed Tim Sims to get ahead in his Mini. As the track dried a little more Sims was being reeled in by Peter Hallford’s Ford Mustang and Bob Bullen in the best of the Lotus Cortinas. Sims bravely held on to win even though the gap was down to 15 hundredths of a second at the flag and it would surely not have lasted another lap.

At the end of Sunday the track was fully dry and that allowed Williamson to take a resounding win in the Falcon as Hallford chased from a distance and Mike Gardiner came through to top the Lotus Cortinas in third place.