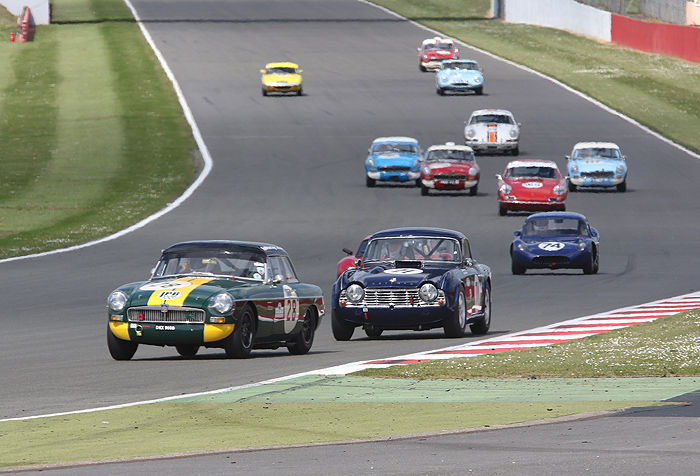 The top class 14-race line-up included a full line-up of regular HSCC championships as well as the second round of the new HSCC Jaguar Heritage Challenge, the inaugural race for the Pre ’80 Endurance Series and a round of the GT and Sports Car Cup.

One of the best races of the weekend was the final race on Sunday when a 40-car grid for a joint race for the HSCC’s Historic FF2000 and URS Classic series produced a fierce lead battle between URS pacesetter Ian Pearson and former HFF2000 champion Nelson Rowe, with victory finally going to Rowe after a tremendous contest.

Andrew Kirkaldy and Martin O’Connell took Guards Trophy victory from another huge grid and the first part of the race was marked by a glorious battle between Kirkaldy (Chevron B8) and Simon Hadfield (Chevron B6). Sadly, the prospect of a battle all the way to the flag was lost when Hadfield had a moment with a backmarker and dropped time. Mike Whitaker (TVR Griffith) topped the GT field.

The ByBox Historic Touring Car Championship round was another great race as the Ford Mustangs of Neil Brown and Greg Thornton battled for the lead while Tim Davies forged his Lotus Cortina into contention. Thornton’s spirited challenge finally ended with a last lap spin, as Davies worked up to take second behind Brown.

Thornton, however, took victory in the first Derek Bell Trophy race in his Surtees TS11 after leader Richard Evans was sidelined with a puncture on his March 79B. Evans started towards the back of the grid for the second race but charged through the field to take a memorable win.

The 31-car 1-litre Historic Formula 3 Championship field delivered two outstanding races on an oily track as Peter Thompson and Simon Armer shared the wins and finished both races less than a second apart after some tremendous racing.

The new Pre ’80 Endurance Series got off to a hugely successful start with a 27-car grid for the inaugural race. Italian racer Michele Liguori proved the class of the field in his Lola T292 and romped home in the 50-minute race as Leo Voyazides and Simon Hadfield led the chase in their Lola T282.

Sam Wilson claimed victory in the Silverline Formula Junior Championship despite a strong early challenge from Andrew Hibberd, while a fantastic battle raged among the front-engined cars as Andrew Tart beat Mark Woodhouse by just eight-hundredths of a second.

Rob Wainwright lost Historic FF1600 victory when penalised 30 seconds for not having a working transponder. Instead, young newcomer Richard Mitchell took the win after a brilliant race with Simon Toyne and James Hadfield making it a four-way lead battle.

Martin Melling and Graeme Dodd inherited Jaguar Heritage Challenge spoils in their Jaguar E-type as other wilted, while Leo Voyazides/Simon Hadfield won the GT and Sports Car Cup race in their superb Daytona Cobra Coupe after a nicely-judged race. Sam Hancock made the pace in his Jaguar E-type over the first half of the race.

Two excellent fields contested the two Road Sports races, with the FISCAR contenders joining the Historic Road Sports pack to make a 40-car grid. Ian Jacobs (70s Road Sports) and Richard Plant (Historic Road Sports) were the two race winners, although Jacobs ran his Mercedes in the invitation class and so top scorer was Julian Barter in his TVR 3000M.

Full results from Silverstone are here: