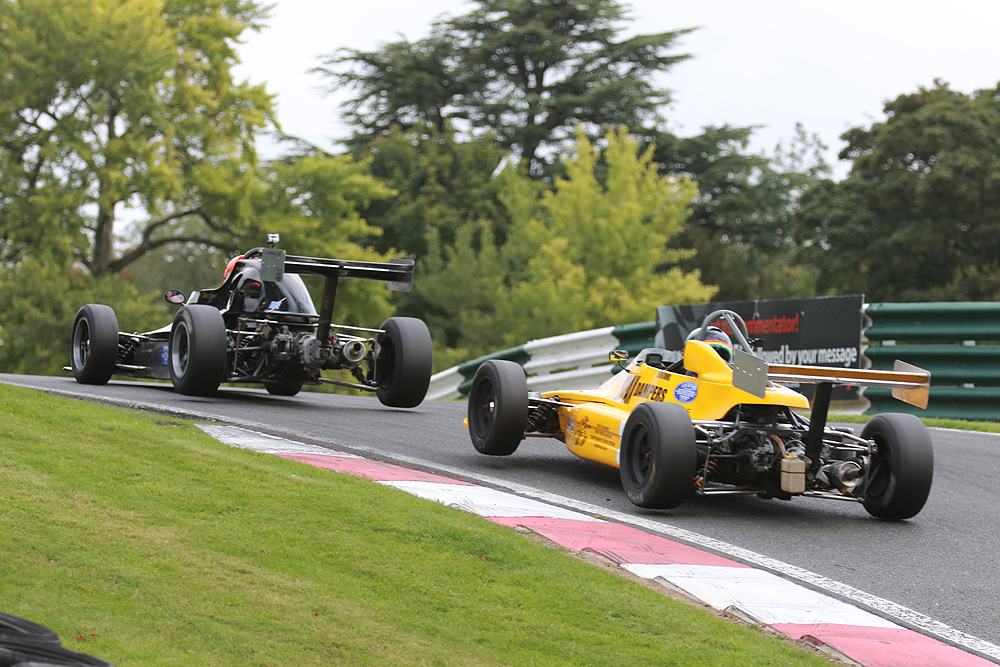 The Historic Sports Car Club headed to Cadwell Park over the weekend (19/20 September) to deliver some great racing at the annual Wolds Trophy at the glorious Lincolnshire parkland track.

With a busy 20-race programme, Cadwell Park looking resplendent in late summer sunshine and a healthy socially-distanced crowd, it was a tremendous weekend of racing at one of the UK’s most rewarding race tracks. As well as some great single-seater racing, the twin Road Sports categories produced excellent racing from big and varied grids.

There was a strong Formula Ford flavour to the Club’s annual visit to Lincolnshire, with half of the weekend’s 20 races dedicated to period FF1600 and FF2000 cars. Pierre Livingston, Cam Jackson and Callum Grant were all double Formula Ford winners despite fierce competition.

A wonderful Historic FF2000 entry was split over two heats and two finals but at the front of the action it was always about two drivers who stretched clear of the chasing pack. Friends and rivals Grant and Benn Simms went wheel-to-wheel in two impeccable contests and it was Grant who just had the upper hand. However, he only ever had a measurable margin when Simms spun at the Gooseneck late in the second race.

The ferocious pace set by Grant and Simms took them clear of a fabulous field of cars. A brake-troubled Ian Pearson was third in both races from Dubliner, and Brands Hatch winner, Peter Drennan in fourth. The heats went to Adrian Langridge and Lee Bankhurst, but neither win was settled until the closing lap as late moments for Ben Glasswell and Greg Robertson opened the doors. Bankhurst had driven a blinder from the back of the grid in the second heat after failing to finish the opening championship race.

Livingston maintained his Oulton Park form with a double in the Historic Formula Ford Championship and even added a third win in the non-championship thrash. As expected, Linton Stutley and Cam Jackson were his big rivals and Jackson battled ahead of Stutley in the opening race to chase Livingston home.

Later on Sunday, Livingston got ahead from the rolling start and was able to edge clear as Stutley and Jackson fought hard for second place. However, a big moment with a backmarker nearly put Jackson out and a big spin cost him any chance of battling Stutley to the flag. Behind the big three, there was lots of battling and in the opener a fine battle for best of the Over 50s went to Clive Richards from Ross Drybrough and Westie Mitchell. Danny Stanzl raced hard to take fourth in the second race as Richards again topped the Over 50s.

Livingston added a third win in the non-championship Kentagon Cup race, which replaced the race lost to the circuit curfew at Brands Hatch in July. Drybrough and Tim Brise rounded out the podium. 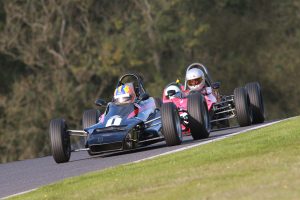 At his home track, Jackson then switched to his Van Diemen RF80 to dominate the pair of the Classic Formula Championship races. While Jackson stormed ahead, there was some tough battling in his wake and it was Jordan Harrison who worked hard for second in the opening race despite fierce opposition from Craig Currie and Mike Gardiner, who was up from 11th on the grid after gearbox dramas early in qualifying.

In the second championship race, Gardner tigered his way to second despite losing his nose cone in the heat of the action as Currie and Jordan Harrison chase. Up into a superb fifth from the back of the grid, after retiring from the opening race, came 16-year-old Samuel Harrison. Jordan Harrison wrapped up the weekend with a win, despite pressure from Currie and Ben Tinkler, in the non-championship race replacing the race lost to red flags at Oulton Park.

Jeremy Clark saw off a strong field to claim an impressive 70s Road Sports double. In the opening race on Saturday afternoon, Clark exploited the nimble Lotus Elan to pull clear of Kevin Kivlochan’s Morgan Plus 8, which struggles for brakes at Cadwell as the race progresses. Rupert Ashdown went well in his dad’s Lotus Elan to chase Kivlochan home as Dave Karaskas (TVR 3000M) and John Williams (Porsche 911SC) rejoined their Oulton Park battle. Karaskas got the place by a second and did the same on Sunday in a race that followed a similar pattern but without Ashdown after the Elan was damaged in Saturday’s Historic Road Sports race.

The first Historic Road Sports race was a cracker although Kivlochan’s AC Cobra only played a brief part before retiring with a sticking throttle. Instead Will Plant, guesting in Kivlochan’s Morgan, battled with the Elans of Paul Tooms and Jonathan Rose as well as the Lotus 7 of Jonathan Stringer. Sadly, the race ended early with a red flag when Barry Ashdown spun his Elan into the barriers on the exit of Barn and Robert Rowe also went off in avoidance. 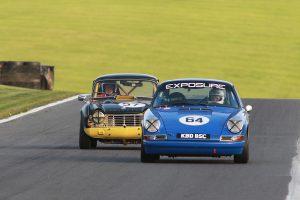 Kivlochan started the second race from the back of the pack but immediately picked up a massive handicap as the field was very stretched out at the rolling start. He did well to get through to sixth, while Plant was an early retirement when he parked the Morgan. Instead Tooms, in the Elan of Larry Kennedy, went clear of Rose for second as Mark Godfrey (Ginetta G4) and Peter Garland (Morgan Plus 8) had good races to third and fourth.

Young lions Benn Tilley and Ben Stiles headed the combined Classic F3 and Classic FF2000 races, which included a couple of cars from the HSCC’s new Geoff Lees Trophy for 1980s single-seaters. In the opening race, Tilley had to chase Matt Wrigley (Chevron B38) in the first half but Wrigley was battling with a clutch problem. When he struggled to get a gear over the Mountain, Tilley pounced and dived ahead into the Hall Bends. Wrigley missed the second race so Tilley had a clear run to the flag in a race interrupted by a red flag after the FF2000s of Chris Levy and Steve Nichols tangled on the run to Park, fortunately without injury. Jon Finch (Ralt RT1) and CFF2000 winner Stiles chased Tilley to the flag in both races.

The Historic Touring Car Championship delivered two more wins for Peter Smith in his Lotus Cortina. On Saturday he battled with the similar car of Roger Stanford before Stanford was stricken with a serious misfire. Stanford started form the back on Sunday and got through to fourth amidst some great dicing as Mark Watts (Ford Mustang) led the chase of Smith. Robert Wainwright (Austin A40 and Steve Platts (Singer Chamois) played starring roles in some entertaining dices, which also featured Jason Wood (Vauxhall Nova GTE) as the best of the concurrent 80s Production Cars.

Rounding out the programme were two races for the Classic Clubmans Championship, with Adrian Holey taking a double win in his Mallock Mk20B. After finishing second on Saturday, Mike Lane led most of Sunday’s race until a late moment at the Mountain allowed Holey to nip ahead. In Class B, Tom Dunstan in the rare Penfold held off the Mallock MK18 of impressive novice Tom Eustace in the opening race, but Eustace turned the tables on Sunday to take a memorable victory.