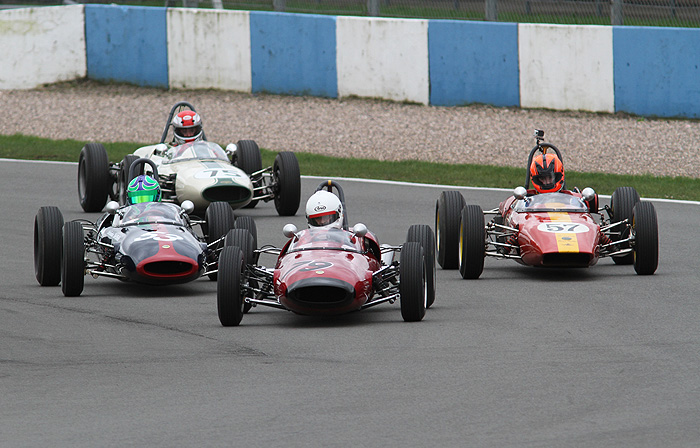 Big grids, exciting racing, slick organisation and close finishes at Donington Park (Sunday 6 April) added up to a great start to the 2014 season for the Historic Sports Car Club.

With the paddock packed with nearly 250 cars, the on-track action was first rate as early championship battle lines were drawn. One of the best races of the day came in the Millers Oils Historic Formula Junior Championship with a mighty five-way battle for second. Although David Methley romped clear to score a commanding victory in his Brabham BT6, the spectators were wowed by the contest for second place.

In a battle of the highest order, young Callum Grant turned in a stirring drive in John Sykes’ Merlyn Mk5/7 to battle through to second. Grant had to race hard to overcome Andrew and Michael Hibberd while Sam Wilson (Lotus 20/22) and spinner Peter Morton (Lightning Envoyette) were the other players. With lots of wheel-to-wheel action and exemplary driving standards, it was a fine start to the season.

Another young talent shone in the Historic Formula Ford 1600 Championship as teenager Michael O’Brien earned a place on the podium after a great battle with the similar Merlyn of Max Bartell. It was only decided at the final corner when Bartell edged back ahead for his best result to date. However, neither of them could rival race winner Benn Simms who charged clear in his Jomo.

Later in the afternoon, Simms did it again in the Historic FF2000 Championship season opener. With his own Royale RP30 not ready, Simms borrowed the Reynard SF77 of Stuart Boyer and ran clear of the battling pack.

The ByBox Historic Touring Car Championship race was another thriller as Neil Brown kept his Ford Mustang ahead of a determined challenge from defending champion Tim Davies (Lotus Cortina). However, an increasingly oily McLeans Corner finally caught Brown out on the penultimate lap and Davies nipped ahead as the Mustang ended its race in the gravel trap.

The 70s Road Sports Championship race delivered a fine lead battle as invitee David Tomlin pitted his Ferrari 308GTB against defending champion Oliver Ford in his Lotus Europa. Ford raced hard to lead as the Ferrari tried to power ahead and even when Tomlin finally blasted ahead, Ford never stopped chasing. In the Historic Road Sports Championship, the Morgan Plus 8 of Richard Plant went clear of the Lotus Elans of Roger Waite and Frazer Gibney.

Ian Jones added yet another win in the Classic Racing Car Championship with his Lotus 59 as Andy Jarvis just kept his Palliser ahead of the Lotus 59 of Antony Ross for second. Finally, the 40-minute Guards Trophy race was a father and son affair as Graeme and James Dodd (Ginetta G16) out-paced the Chevron B6 of Michael and Will Schryver. In a closely fought GT division Mike Whitaker finished ahead despite a major challenge from the similar TVR Griffith of Bob Brooks.