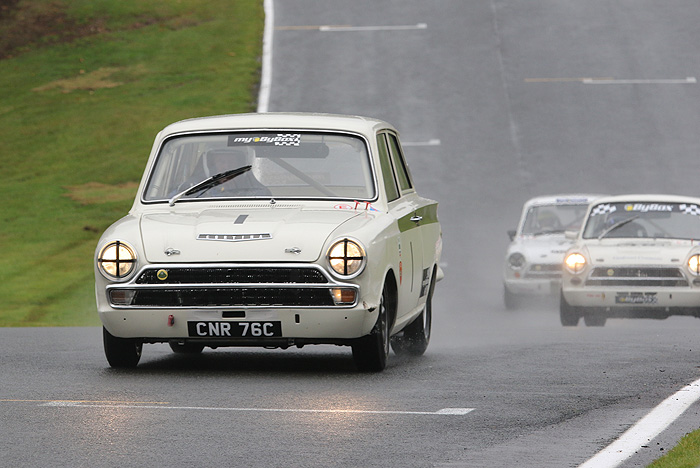 On a weekend of close finishes, the final race maintained the quality of racing until the very end of the meeting. In the second race for the ByBox Historic Touring Car Championship, the result went down to the wire as Tim Davies headed Mark Davies by a fifth of a second after a fabulous battle of the Lotus Cortinas. Earlier in the day, Jon Milicevic famously won in the rain in the opening race as his Mini Cooper coped best with some tough conditions.

Monday’s programme included a demonstration session from the stunning Le Mans-winning Jaguar XJR9. Andy Wallace drove the car to victory in 1988 and was back behind the wheel on Monday to treat fans to the sight and sound of a Group C car in action at Oulton Park. The damp conditions prevented Andy form really pushing the famous car, but it still made a wonderful sight for a typically large and enthusiastic crowd.

Another star of the weekend was Mallock Mk20/21 racer Mark Charteris, who took two wins in difficult conditions on Monday. In the weekend’s second Derek Bell Trophy race, Charteris romped away from the Formula 2 and Formula 5000 cars to score a glorious overall win with Mark Dwyer second in his F2 March 742.

In the dry on Sunday Dwyer drove a mighty race to fend off the Formula 5000 Chevron B37 of Neil Glover in a race stopped early after Ian Ashley’s Lola T300 crashed at Cascades. Meanwhile, Charteris doubled up on Monday by winning the Classic Clubmans Championship race from John Harrison.

Father and son Charles and Julian Barter each bagged a Road Sports win, as the Historic Road Sports and 70s Road Sports Championships produced two excellent races on Sunday. Charles B had to recover from an opening lap tangle to forge his Datsun 240Z to the narrowest of victories over the Lotus Europa of Jim Dean, while Julian B bounced back from a slow start to win the Historic division in his Lotus Elan.

Double victories on Sunday went to Andrew Hibberd (Lotus 22) in the Silverline Formula Junior Championship and Simon Armer (March 703) in the Historic F3 Championship. All four races provided hugely entertaining races with close lead battles and outstanding driving and sportsmanship among the contenders.

Mike Whitaker (TVR Griffiths) took the GT division in the pair of Guards Trophy races while young chargers Max Bartell and Callum Grant topped the sports-racing cars in their Elva Mk7S. The battle for second was only resolved late in the race when Charles Allison (Chevron B8) had to take to the grass at Cascades to avoid a spinner and the Lenham P69 of John Waggitt/Peter Needham nipped back ahead.

It was a good weekend for Callum Grant at his home track as he took a resounding Historic FF1600 Championship win as former F3000 racer Mark Shaw battled to second after a big contest with the front-engined Mallock Mk9 of Michael Mallock. Grant also finished second in the Historic FF2000 Championship round but could not catch the Royale P27 of winner Tom Smith.

Ian Pearson was in typically strong form to win both Classic F3 Championship/URS Classic FF2000 Series races as Monday’s rain made the track very slippery for the opening race in particular. Pearson romped clear in his FF2000 Van Diemen RF83 as Max Bartell (Chevron B34) twice topped the F3 cars in second place. In the second race, the field was joined by contenders in the Classic Racing Car Championship and it was Sam Binfield (Titan Mk6) who headed them home.